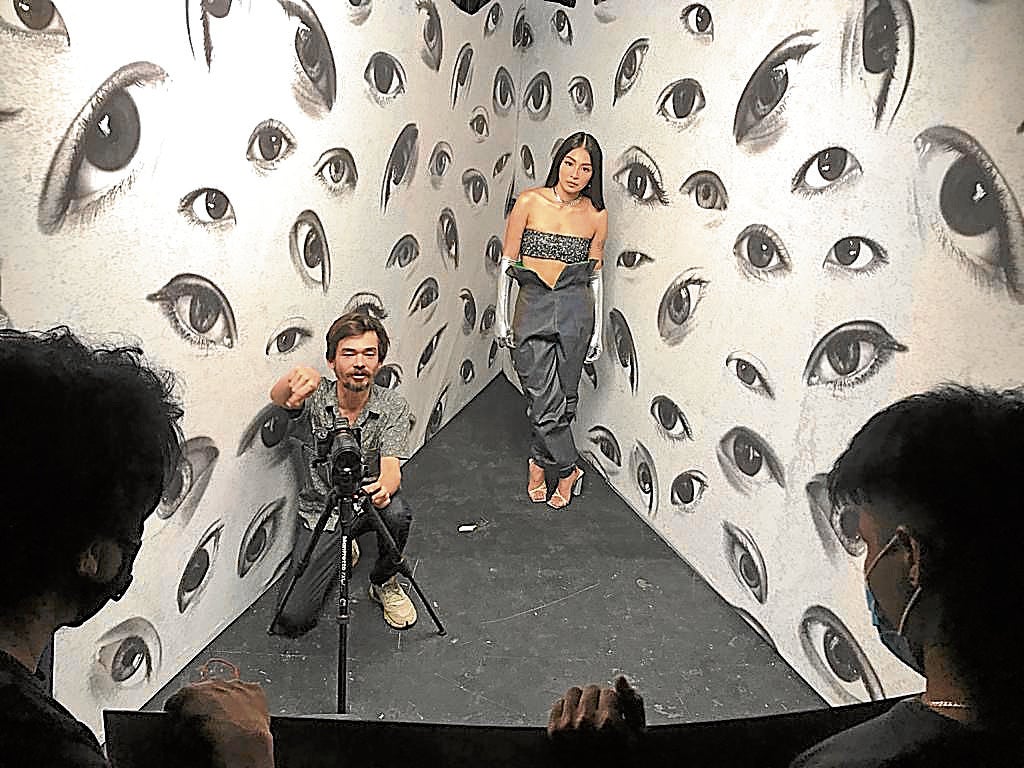 If, like us, you couldn’t get enough of Nadine Lustre’s tantalizing visual album “Wildest Dreams,” the “culprit” to blame for its cogent mix of empowering themes and potent visual appeal is French-trained, Filipino-Belgian director and film conservationist Dominic Bekaert of Zoopraxi Studio.

The ruminative 33-minute video utilizes six songs culled from Nadine’s latest 12-track recording to bring to life the tale of a woman embarking on a journey of self-discovery and empowerment.

It is framed by voice- and range-appropriate tunes that hopscotch through a plethora of musical genres, including electropop, R&B and dance music.

Of course we would have been happier if we heard “Save a Place,” the singer-actress’ gut-wrenching ode to her late brother, and “You Can Stay,” her ravishing but short Janet Jackson-channeling lament over a heartbreak.

But the tight coherence of “Dance With Danger,” “White Rabbit,” “Glow,” “Ivory,” “Grey Skies” and “Wildest Dreams” cleverly and insightfully strung together is convincing enough to justify the visual album’s raison d’être.

“The decision to broach the idea of a visual album had a lot to do with the pandemic,” Dominic explained to us over Zoom last Saturday. “It also had to do with the musicians not being able to do live performances these days, as well as music kind of being blocked.

“So, we thought it would be an interesting venue for musicians to create a visual album, where we can show their mood or the universe that their talent can create and tell the story through it. We listened to demos of ‘Wildest Dreams’ and saw that there was a message—and we wanted to bring it to life and show it through symbolism.

“Careless (the music label owned by James Reid and his partners) contacted us to do one or two music videos, but we felt we needed to tell a bigger story.”

“It was like a musical journey in itself,” producer Clementine Comoy, who was seated beside Dominic, interjected. “The demo already had so much character, and it had the Filipino instruments in the samples, so we looked at each other and said, ‘Let’s turn it into a story!’”

Dominic added, “Originally, we had written [a story featuring all the songs in the album], which had 10 tracks at the time. But with Metro Manila then being in MECQ (modified enhanced community quarantine), we thought [the video with all 10 songs] would be too complicated to pull off. So, we pared it down to six and decided which songs would fit right into this extract.”

Asked how long it took them to prepare for it, Dom said, “We were super excited about it, and we wrote it in two weeks. The whole thing was shot in 20 days—we did for 17 days in the studio in September, then three days of exteriors in August.

“At one point, we were scared we wouldn’t be able to do it because we were back in ECQ right after. Then, it was MECQ, then back again to GCQ. Thank God the timing was perfect.”

Do directors have to “connect” with their actors to realize their vision?

“Definitely,” Dom stated. “The better you connect with them, the more you can realize your vision.”

Clementine added, “And the better you connect with them, the more you can come up with something true.” 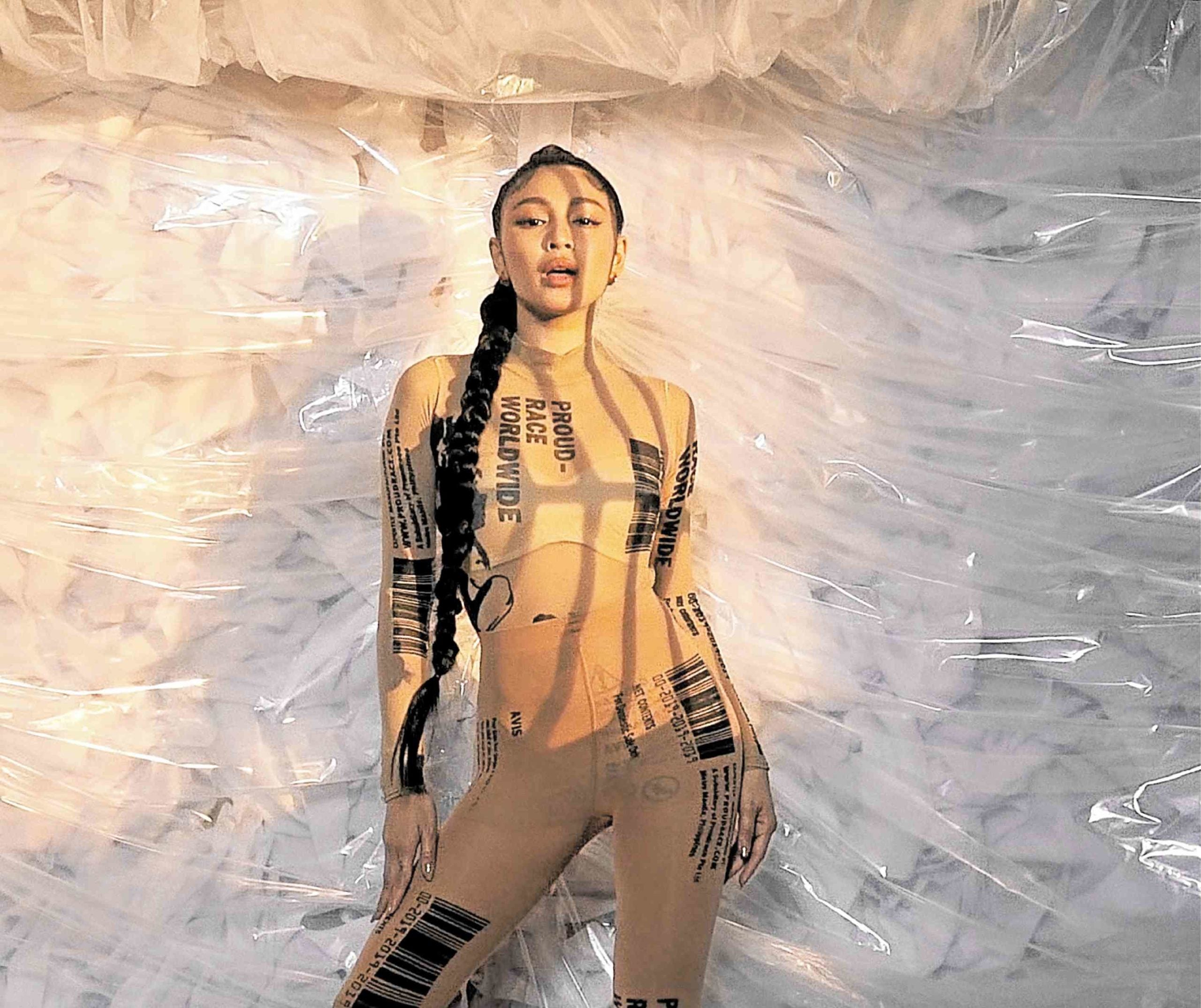 Nadine Lustre in her visual album

The rest of our Q&A with Dominic:

With self-discovery and empowerment at the core of the video’s themes, did you have to know who Nadine was and the issues she needed to come to terms with to realize your vision?

I first met Nadine when we did the music video of “Fiend” for James [Reid], and she was in it. We “discovered” her there, then discussed with her the imagery and symbolism she wanted to show in her own songs. We toyed around with those and brought in our own version. But there’s a lot of her in it, for sure. It’s amazing to see her at work—she’s very focused.

She was open to any ideas because we sometimes changed our plans on the spot and adapted when we saw how things played out on set to make sure we got the best out of each scene—and she was completely game, like the scene where she’s inside the plastic. She was all drenched with cold water for four hours, but she was like, “Go for it.”

Nadine has always had depth as an actress—and her music videos largely benefit from it. More than that, she has successfully transformed into this truly lovely version of herself. The video sort of allows viewers to glean into this transformative process. Your thoughts?

One of the first themes that came to mind was that of the Phoenix. You see something burning up and being reborn into another form.

Dom, can you walk us through your Pinoy roots?

My mom’s Filipino and my dad’s Belgian. I left here when I was 4 and came back in 2016 to head the National Film Archives. We worked on restoring films like “Insiang” and “Maynila sa Mga Kuko ng Liwanag.” I caught up with my Filipino culture there and started getting better at Tagalog.

What was the biggest challenge you had to hurdle for this video?

It was just to make sure it would happen. We were very lucky with this project because things just came together.

We’d love to see a full-length movie version of “Wildest Dreams.” If you were to make a movie now, what Filipino films would inspire yours?

Mine would completely be inspired by Eddie Romero’s “Agila,” which I find absolutely beautiful. It’s a sprawling tale about this country spanning generations, going from the Philippine Revolution to modern-day Philippines. I also love “Ganito Kami Noon… Paano Kayo Ngayon?”

When I discovered that Romero wrote his scripts in English, I felt less bad about doing mine in English (laughs).

So, why the shift from films to music videos?

What’s cool with music videos is you don’t have to explain the imagery—you can use symbolism and people don’t ask you why. There’s a lot more freedom in that space. Moreover, music videos get seen. As you said, independent films get to go to festivals, but no one really sees them at the end of the day. They’re your little secret pride, but they don’t get the interaction they should.

What’s in the pipeline for you and Zoopraxi that you’re free to reveal to us?

We have a couple of music videos that we’ll be working on soon and a short film with Sarge Lacuesta. We’ve also been wanting to make our Gabriela Silang film.

What prompted you to incorporate folkloric elements into the video, like the references to Maria Makiling and the anito?

Those are among the things that fascinated us when we got here, and they’re pretty much a way of finding one’s roots and understanding them better. There’s also this thing wherein the Philippines, through its beliefs, is very open to symbolism and imagery.

I thought it was one of the best ways of bringing people into that state of mind, even the way the albularyo says, “I give myself permission to feel…”

But then, we were also inspired by French imagery, so the Little Prince in “Dance With Danger” is pretty much the image of lockdown and that feeling of being on a tiny planet and cut off from the rest of the world.