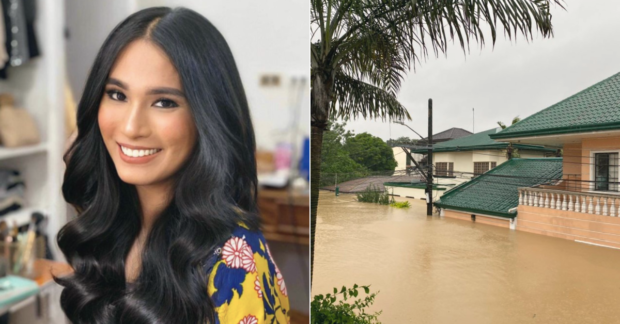 Mela Habijan documented the rising flood in the Marikina residence she lives in. Image: Instagram/@missmelahabijan

Actress Mela Habijan was among those affected by floods as Typhoon Ulysses rammed through Metro Manila, Central Luzon and Calabarzon.

Habijan showed the result of the heavy rainfall that the typhoon brought to Provident Village in Marikina via Twitter. The same village was among those devastated during Typhoon Ondoy in 2012.

“Our house is getting flooded. But my family and I are safe,” the “Manilennials” star wrote this morning.

“As compared to Ondoy, we’re older, more mature, calmer, and more accepting. We can always bounce back! [Wherever] you are, I’m praying for your safety.”

Our house is getting flooded. But my family and I are safe. As compared to Ondoy, we’re older, more mature, calmer, and more accepting.

We can always bounce back!

Whereever you are, I’m praying for your safety.

The first photo she shared showed the flood seeping into the gate of their neighbor’s house.

By the next photo — a light-hearted selfie with her father — the flood had nearly reached one floor of the house.

Just past 9 a.m., the flood had already submerged the first floor of houses on the street.

Provident Villages.
As of 923 AM. pic.twitter.com/YyTCn0XsMR

Habijan shared an update this noontime, assuring her friends, “Though stranded, The Habijans are safe. We are also joined by some of our neighbors.”

Marikina residents in need of rescue may reach the following hotlines of the Marikina City Disaster Risk Reduction And Management and Marikina Rescue 161:

Marikina River’s water level rose up to 21.9 meters this morning, according to the city’s public information office. It has begun to recede and is at 21.8 meters as of 12:08 p.m. JB

Catriona Gray, criticized for being abroad during typhoon, answers back: ‘I’ve been doing my part’

Read Next
Catriona Gray, criticized for being abroad during typhoon, answers back: ‘I’ve been doing my part’
EDITORS' PICK
SMDC’s Style Residences: A real estate investment that will always be on-trend
Start the year right with sustainable oral hygiene with SPLAT’s eco-friendly natural toothpastes
DILG presses local gov’ts: Restrict the unvaxxed folk
Drugstores as booster sites initially giving Sinovac, Astra
Health chief urges PAO head to get jabbed
Acer starts the year off strong with the Aspire Vero National Geographic Edition
MOST READ
Mayor Vico counters vice mayor: ‘Did I say anything about his family?’
IATF places 4 provinces under Alert Level 4
Imelda Marcos trends on Twitter after octogenarian jailed for allegedly stealing mangoes
SSS: Members on home quarantine due to COVID-19 can apply for sickness benefit
Follow @NGunoINQ on Twitter
Don't miss out on the latest news and information.