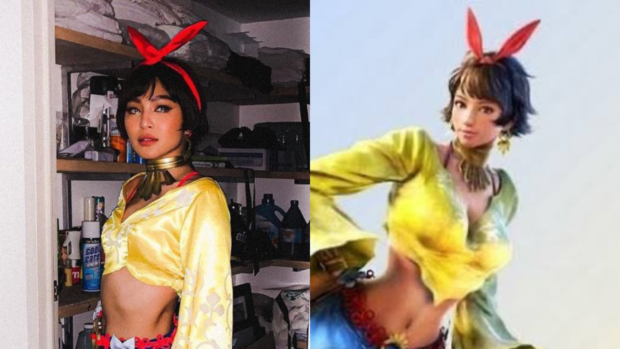 Nadine Lustre’s cosplay of the Tekken character Josie Rizal gained the praise of the video game’s director, who called it “perfect.”

The actress channeled the Filipino character as she wore the same outfit Josie Rizal dons in the popular fighting game, as seen in photographer Andrei Suleik’s Instagram post on Nov. 1.

Lustre completed the red, blue and yellow ensemble with a golden necklace and gladiator sandals with motifs of the sun.

Her donning the costume later went viral on Twitter and caught the attention of Tekken’s director and producer, Katsuhiro Harada.

Harada called Lustre’s cosplay of Josie Rizal “perfect” as he shared a post of one @walkingnozomi. on Nov. 3. The Twitter user uploaded a photo of the video game character beside Lustre’s cosplay.

Josie Rizal was introduced in Tekken 7, the ninth installment in the series, back in 2015. Her name is a play on the name of the Philippine national hero Jose Rizal.

Mari Shimazaki designed Josie Rizal with the help of Mark “Markman” Julio, who is of Filipino descent. When creating the character, Harada noted that Julio “offered advice that shaped many of the character’s traits, including her name.” JB