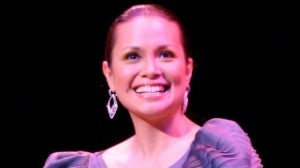 NEW YORK CITY—I must have followed Lea Salonga’s every concert in New York, and nothing sends me to Dreamland faster than her bluesy opening number, “How About You.” I listen with my eyes closed, knowing the best is yet to come.

On May 4 at the packed Town Hall theater on Broadway, Lea did her usual repertoire of OPM (“Laki sa Layaw Jeprox”), Broadway (“I’d Give My Life for You”), Big Band (“Orange Colored Sky”), standard (“How Do You Keep The Music Playing”), and some sappy numbers.

But somewhere in between, she surprisingly detoured to pop-rock-metal. There she was reinterpreting Lady Gaga’s “Poker Face” in a classic Armani pantsuit. No crotch-spreading choreography. No purple
hairpiece. Just a slow, mellifluous start, building up the beat to p-p-p poker face/ p-p poker face. The audience went wild. It was a number refreshingly and inimitably Lea.

Later, she did Cee Lo’s “Forget You” wearing a body-hugging terno gown. A visual disconnect if you ask me but close your eyes and Lea’s music will transport you to some place agreeable and mellow.

The Town Hall concert saw a packed audience of about 1,400 enjoying “The Journey Continues,” where Lea tells the chronology of her life through songs. Not at all bashful about being 41, Lea sang Rupert
Holmes’ endearing ditty, “Nearsighted,” which the audience found delightful, especially after she put on a pair of eyeglasses.

“If you take these glasses from my face, Think that you will find, Undeniably, certifiably just a shade of blind… The day is brighter, softer, lighter when it’s slightly blurred. Nearsighted, it’s another lovely day, nearsighted.”

Lea recalled how she met her husband Robert Chien, and how being a mother to her 5-year-old daughter has given her a new perspective on interpreting Miss Saigon’s “I’d Give My Life for You” — the song before her Kim character pulled the trigger. This was probably the longest-applauded number of the concert.

“I’ve waited 20 years for this,” said Ralph Johnston, who works at a Bronx hospital.

For some reason he missed “Miss Saigon” on Broadway, but had always wanted to watch it. Hearing Lea sing the last song of the first act, he said she was “marvelous, outstanding, I was crying.”

Visitor from Chicago Beeboy Mangubat said Lea sang the “Miss Saigon” music “with much more meaning. I’m happy I could also experience it.” Marisse Panlilio, a musical director, said listening to Lea “just makes me wanna lie down on my bed and chill.”

Everything about Lea was perfect – from musicality to storytelling to a sense of connection with her audience. No matter that I’ve seen many of her New York shows, I always leave the theater feeling pleased beyond words. It’s not just pure entertainment. It’s the reassuring thought that Lea Salonga is very much around, singing to her beloved city long after the lights had dimmed on “Miss Saigon.”