MANILA, Philippines—A lawmaker was disturbed by the impudence of the Tulfo brothers in saying on prime time TV that they would exact revenge on show biz couple Raymart Santiago and Claudine Barretto for ganging up on their brother, Inquirer columnist and radio host Ramon Tulfo.

Kabataan party-list Representative Raymond Palatino has called on the Movie and Television Review and Classification Board to reprimand the hosts of the “T3” show—Erwin, Raffy and Ben Tulfo—and ABC 5 broadcast network for violating its guidelines on media propriety.

“It’s entertaining if it’s a TV soap opera but not funny when media persons issue those strong words on prime time. MTRCB should remind media networks to be more circumspect. Such language is not appropriate to be heard by children and it offends even the sensibilities of many adults. The public deserves quality TV programming, not the ghastly, nauseating type of entertainment disguised as public service,” said Palatino in a text message.

Like the video of Ramon Tulfo being ganged up at the Ninoy Aquino International Airport, the six-minute T3 segment was uploaded to YouTube hours after the broadcast. 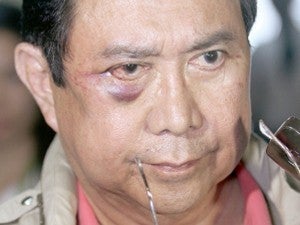 But administrators of YouTube later took the file down, saying the clip “was not available due to a copyright claim by ABC Development Corp.”

In the segment, the show’s hosts expressed displeasure at what befell their brother, whom they held in high regard.

Raffy said his brother’s aggressors were “lucky because you ganged up on my brother.” He described what could have happened to Santiago if he had fought his brother one-on-one, as Ramon was “a martial arts expert.”

“It was very unfortunate that my brother was all alone at that time. Had I been there, [the brawl] would not happen,” said Erwin, adding that he had been with his elder brother in Davao but he took a later flight to Manila.

Ben, who boasted about going against criminals and murderers, asked Santiago to meet him in an empty warehouse to determine “who would be the last man standing.”

Their braggadocio also did not sit well with their aggrieved brother.

After his brothers aired their threats on Monday night, Ramon gathered them at the studio and spoke against the words they unleashed against Santiago and Barretto.

“I told them that revenge is the lowest form of retaliation,” Ramon told the Inquirer over the phone on Tuesday. “Going through that mode of retaliation is based on antiquated laws of an eye for an eye and a tooth for a tooth.”

“What should prevail is the law of Jesus of Nazareth, the one that says if one slaps you on the left cheek, you should offer your right cheek as well. But I think that is a poor analogy,” he said. “I said to them there should be no revenge.”

After saying his piece, Ramon said his brothers realized their mistake. The columnist said an apology to the public was “forthcoming” from the brothers.

Ramon acknowledged his brothers’ feelings toward his predicament, saying he understood them as they were “a tightly knit family.”

“It was a natural reaction from my brothers, but I pointed out to them that what they said was wrong,” he said.

For instance, if something untoward happened to the Santiago couple, “we would be natural suspects,” the columnist recalled what he told his brothers.

Ramon filed charges of physical injuries and grave coercion against the Santiago couple on Monday at the Pasay City Prosecutor’s Office over the beating he received from them and their friends the other day.

He said he took photos of Barretto berating a Cebu Pacific Air ground staff apparently over the latter’s offloaded luggage. Santiago allegedly tried to get the camera phone from the columnist.

When Tulfo refused, Santiago and their friends ganged up on Tulfo sparking a one-sided melée inside the Naia Terminal 3 on Sunday.

The Santiago couple were reportedly poised to file countercharges against Tulfo. With a report from Miko Morelos