Cardi B, Usher and Billie Eilish get creative for ‘Show Me the Signs’ benefit auction 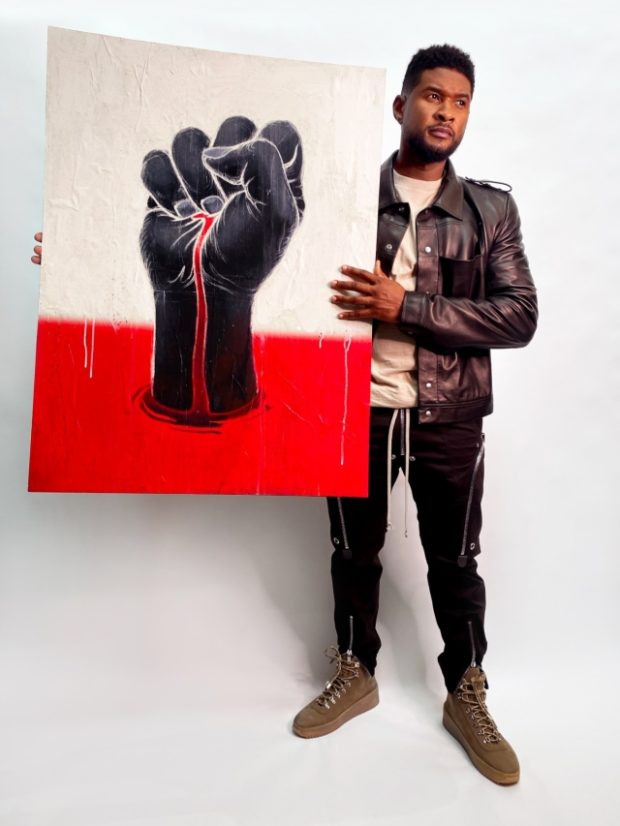 The musician Usher is one of the stars who has created artwork for the ‘Show Me the Signs’ benefit auction, with 100% of the proceeds going to the AAPF #SayHerName Mothers Network. Image: Artfizz via AFP Relaxnews.

The #SayHerName campaign raises awareness about the often invisible names and stories of African American women and girls who are, along with African American men, victims of police violence in the United States. More than five years since the campaign was launched by the African American Policy Forum, it is now the focus of an auction of artworks made by over 100 creative stars, from Cardi B and Usher to David Hockney.

Over 100 stars got creative for the “Show Me the Signs” benefit exhibition and auction, creating protest signs that fight for change. Cardi B, Jim Carrey, George Condo, Billie Eilish, David Hockney, Bruno Mars, Camille Henrot and Nathaniel Mary Quinn have all made artworks for the sale, the proceeds of which will go to the #SayHerName Mothers Network, run by the African American Policy Forum (AAPF).

Starting bids for the artworks range from $1 (about P48) for a cardboard sign made by the Haas Brothers — which encourages potential buyers to “do more than bidding on a sign” — to $20,000 (around P960,0000) for works by American artists Rashid Johnson and Nancy Rubins.

Many signs in the auction pay tribute to Breonna Taylor, an African American medical worker who was killed as she lay sleeping by Louisville police officers in March this year. Aaron Fowler’s sign, for example, is titled “Sorry Ms. Palmer” in reference to Taylor’s mother, Tamika Palmer. Canadian painter Carling Jackson created a colorful portrait of the 26-year-old.

“We thank all of the participating artists who have shared their creative vision to stand for love and equal justice, and to support this important cause,” Amanda Hunt, director of public programs and creative practice at Lucas Museum of Narrative Art in Los Angeles and member of the “Show Me the Signs” Benefit Committee, said in a statement.

“‘Show Me the Signs’ brings the creative community together with a larger collective to protest police violence against Black women, support the families already impacted, and promote a better future for all,” she added.

Blum & Poe is pleased to host “Show Me the Signs,” a preview exhibition of an upcoming benefit auction to help the families of Black women killed by the police. Over 100 artists have created powerful pieces in the form of protest signs to fight for change, with all works being auctioned and 100% of the proceeds going to the African American Policy Forum #SayHerName Mothers Network. Founded by AAPF in December 2014, the #SayHerName campaign works with the mothers and families of Black women, girls, and femmes killed by police to elevate their stories and fight for justice.  “Black women and girls do not fit the most accessible frames of anti-Black police violence, and because of that, it’s difficult to tell their stories in a way that people recognize and remember,” said Dr. Kimberlé Crenshaw, AAPF executive director and founder of Say Her Name. “By working with the families of slain Black women, AAPF’s #SayHerName campaign resists Black women’s invisibility by telling their stories.”  Featuring works by artists across creative industries including April Bey, Cardi B, Jim Carrey, George Condo, Billie Eilish, Aaron Fowler, David Hockney, Rashid Johnson, Bruno Mars, Marilyn Minter, Nancy Rubins, and Nathaniel Mary Quinn, “Show Me the Signs” brings together a diverse and inclusive collective of creative voices that reinforce solidarity and empower love. The benefit auction will be hosted on Artfizz, a new online community-driven marketplace for contemporary art, which is offering its platform to support the initiative prior to its official launch later this fall. Click the 🔗 in bio for more info.  “Show Me the Signs” will be on view at Blum & Poe, LA October 30-November 14. The live auction will begin on November 10.  #showmethesigns Image: Installation view of “Show Me the Signs” at Blum & Poe, Los Angeles, 2020, photo: Ed Mumford.

Although the issue of police brutality towards African American women was brought into the spotlight following the death of Taylor, such events often gain relatively little media coverage and the perpetrators rarely brought to justice. Since 2015, 48 African American women have been killed by law enforcement officers in the U.S., according to data from the Washington Post. During the same period, only two cases saw officers charged with manslaughter or murder.

“Black women and girls do not fit the most accessible frames of anti-Black police violence, and because of that, it’s difficult to tell their stories in a way that people recognize and remember,” said Dr. Kimberlé Crenshaw, AAPF executive director and co-founder and founder of Say Her Name, in a statement. “By working with the families of slain Black women, AAPF’s #SayHerName campaign resists Black women’s invisibility by telling their stories.