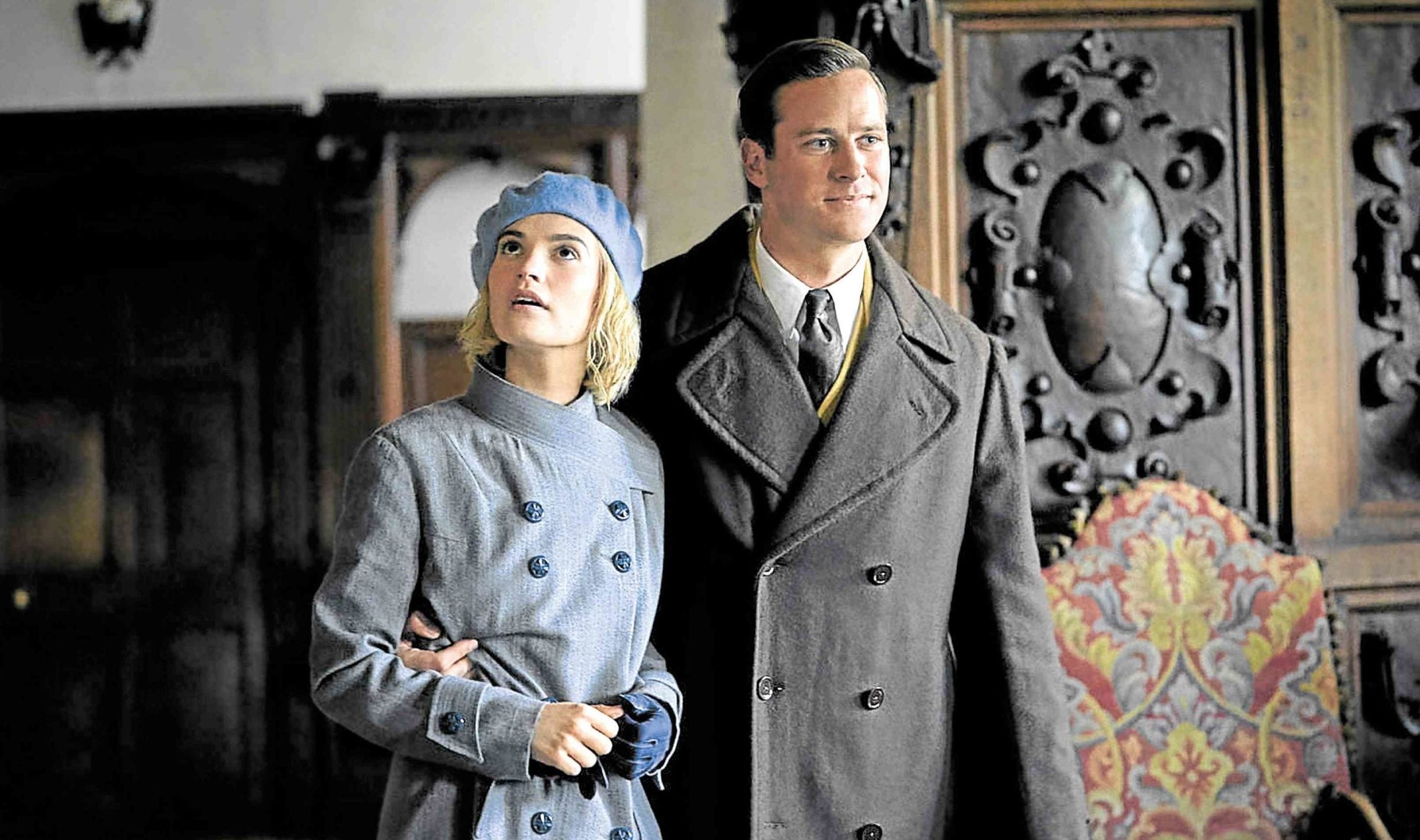 Think of the splashiest films you’ve seen dashing actor Armie Hammer in and you’ll be hard-pressed to single out a significant role that puts him in a contemporary setting. Consider these films: The secret affair of star-crossed lovers Oliver (Armie) and Elio (Timothée Chalamet) in “Call Me by Your Name” takes place in 1983, while, in “The Man from U.N.C.L.E.,” Armie (as Illya), with equally gorgeous Henry Cavill (Solo) by his side, battles nefarious creatures that lurk in the shadows during the Cold War in 1963.

Hopscotch forward to 2003, when the Winklevoss twins, Cameron and Tyler (both played by Armie), cross paths with Mark Zuckerberg (Jesse Eisenberg) at Harvard for the Facebook drama “The Social Network.” Then, travel back in time to prewar 1933 to see how lone ranger John Reid (Armie) manages to get on Tonto’s (Johnny Depp) good side in “The Lone Ranger.” Even Armie’s latest project, Ben Wheatley’s “Rebecca”—about a widower (Armie) who brings home a young and impressionable bride (Lily James)—takes place in the ’30s.

When we talked to Mr. Wheatley in a one-on-one video chat just before “Rebecca” premiered on Netflix last week, he explained to us his decision to cast Armie in the role originated by Laurence Olivier in Alfred Hitchcock’s 1940 classic.

Ben described his 34-year-old, 6’4” tall and drop-dead gorgeous lead star as “a man out of time … who looks like a 1940s matinee idol.” And he’s right, of course—Armie looks snug fit for a period setting.

When we spoke to Armie the following day, along with other members of the Philippine press, the actor told Inquirer Entertainment that it was never his intention to just pursue roles that inhabit tales about yesteryears. This he explained after we asked him if he finds it easier to portray characters in period films.

“No, I don’t,” Armie said. “But no one has really asked me to do contemporary films—and I’m really confused by this. I think I’ve only made one film that takes place in contemporary times, and it’s called ‘Sorry to Bother You’ (a dark comedy that has a 93-percent approval rating on Rotten Tomatoes). 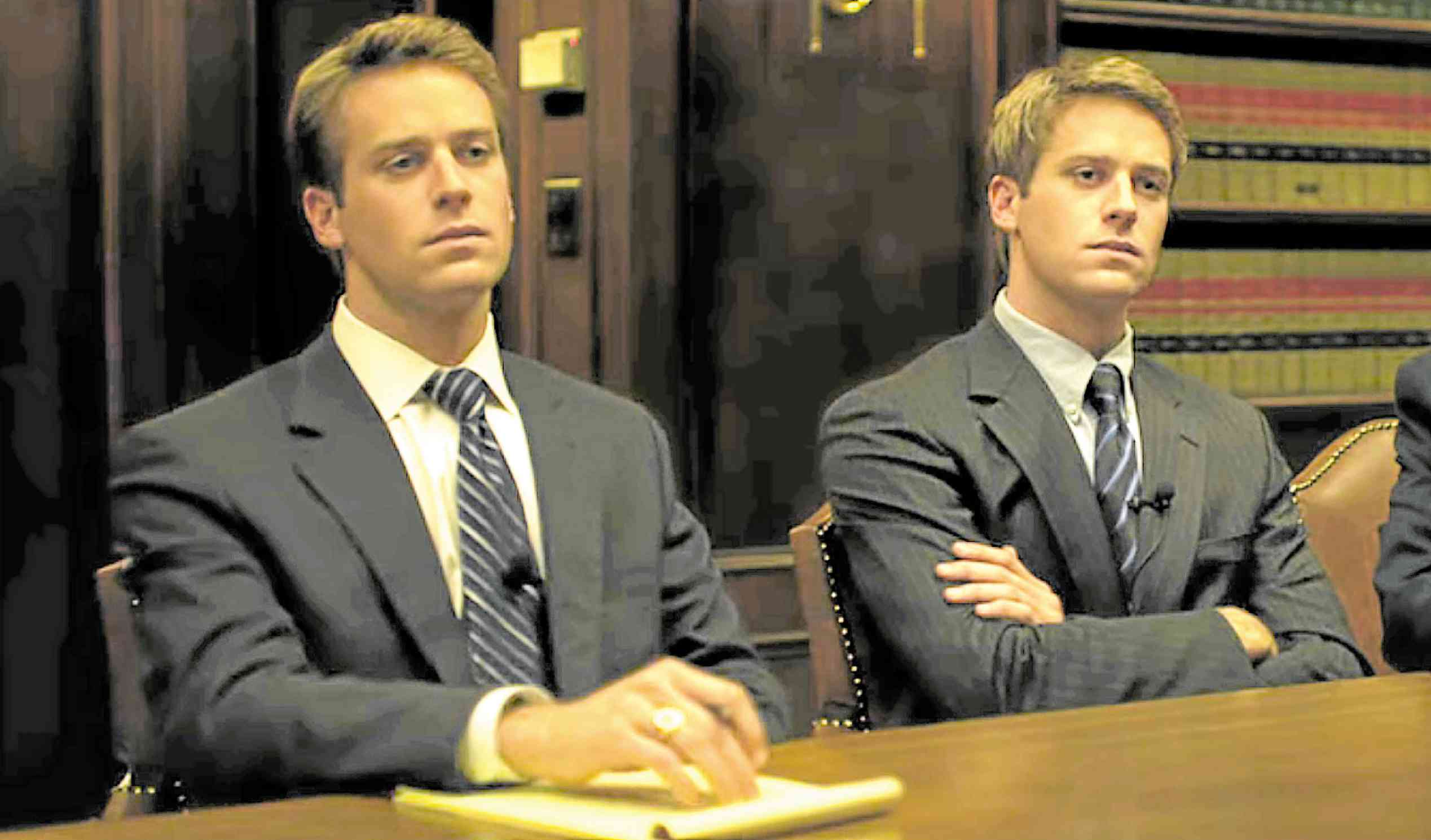 As the Winklevoss twins in “The Social Network”

“I mean, take ‘The Social Network.’ When we shot that film, it was 10 years in the past. But yeah, no one’s asked me to do any modern films. I would love to, though.”

We did tell Armie that we thought it was probably because of his impossibly handsome mug. After all, the actor certainly looks like he’s been ether painted or illustrated from everybody’s idea of what a classically handsome man would look like—which was the same observation we shared with his “Man from U.N.C.L.E.” costar Henry Cavill when we met the “Man of Steel” star in a one-on-one interview in December last year.

The actor’s decision to veer away from a cookie-cutter characterization even drove him to avoid watching the 80-year-old version of “Rebecca,” Armie admitted: “I didn’t watch Laurence Olivier’s film before the shoot because I didn’t want to be influenced by anything or anyone. That being said, while remaining as true to our source material as we could, we did want to modernize it and make it something that was palatable and approachable for a modern audience.”

Knowing he was playing a role originated by the legendary actor in the big screen, didn’t he find the task daunting? “Honestly, I just thought that Sir Laurence Olivier was an actor who was so good at acting that they named an acting award after him,” Armie said. “But at the same time, he’s dead, so I don’t think he’s going to mind very much.”

But there was something Armie did find “particularly difficult” about the task. “The most challenging part about portraying him is the stillness that these kinds of character possess. They have such a status in life that they’re not used to hiding or feeling uncomfortable.

“They’re used to feeling better than everyone. So, I tried to move as little as possible because, as a person, I’m fidgety and not very still. I’ve got a lot of energy, and I’m kind of all over the place. So, that was tough for me.” 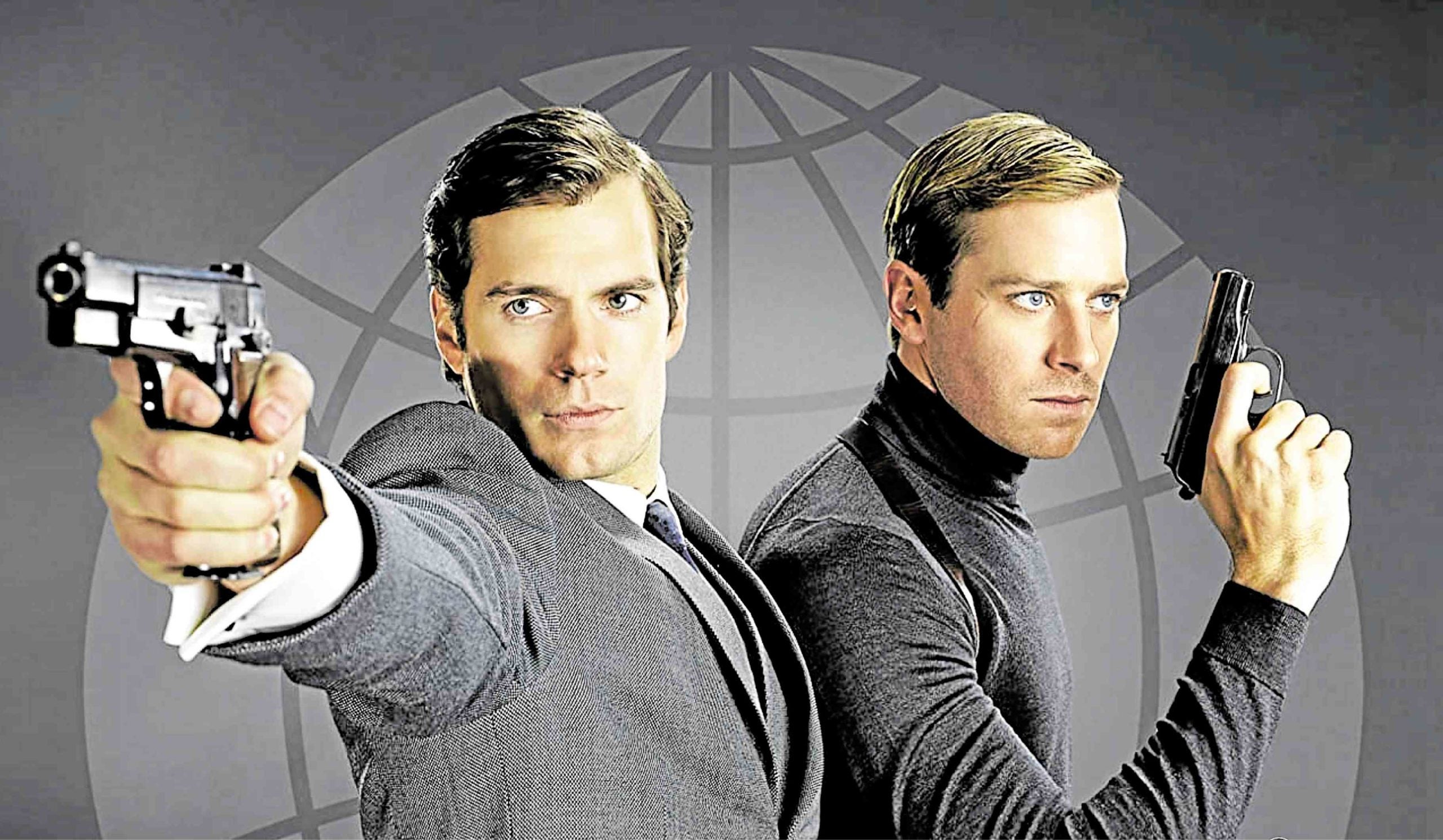 Is he in any way similar to the secretive character? “Well, I mean I ‘look’ pretty similar, but that’s where the similarity ends. I don’t have a castle or a 1920s Bentley (laughs),” Armie quipped, chuckling. “If I had a castle, I wouldn’t be here talking to you. I’d be living in my castle and would never make a movie. I’d be out there horseback riding and shooting bows and arrows and stuff.”

The film owes much of its eye-candy appeal to the members of its fabulous production team who had moved heaven and earth to bring “Rebecca’s” picturesque settings to throbbing life.

“Yeah, it was a really fun film to make,” Armie pointed out. “We shot all over the English countryside, with some of the most beautiful locations I’ve ever seen. We also went to the south of France. We shot in Monaco and in all these really beautiful places.

“In terms of any special memories that stand out, this is the thing about making a film. You travel and have such a good time with the people you’re with. At the end of it, you say goodbye to everyone you might never see again. It’s kind of always fun to roll the dice and just see what happens next.”

When we asked Armie why his man-of-the-world character would suddenly be attracted to someone so unsure of herself, he answered, “I don’t know if it’s the fact that she was unsure of herself that drew Maxim to her, but I think it was that she seemed very different from his last wife, who made his life very miserable. 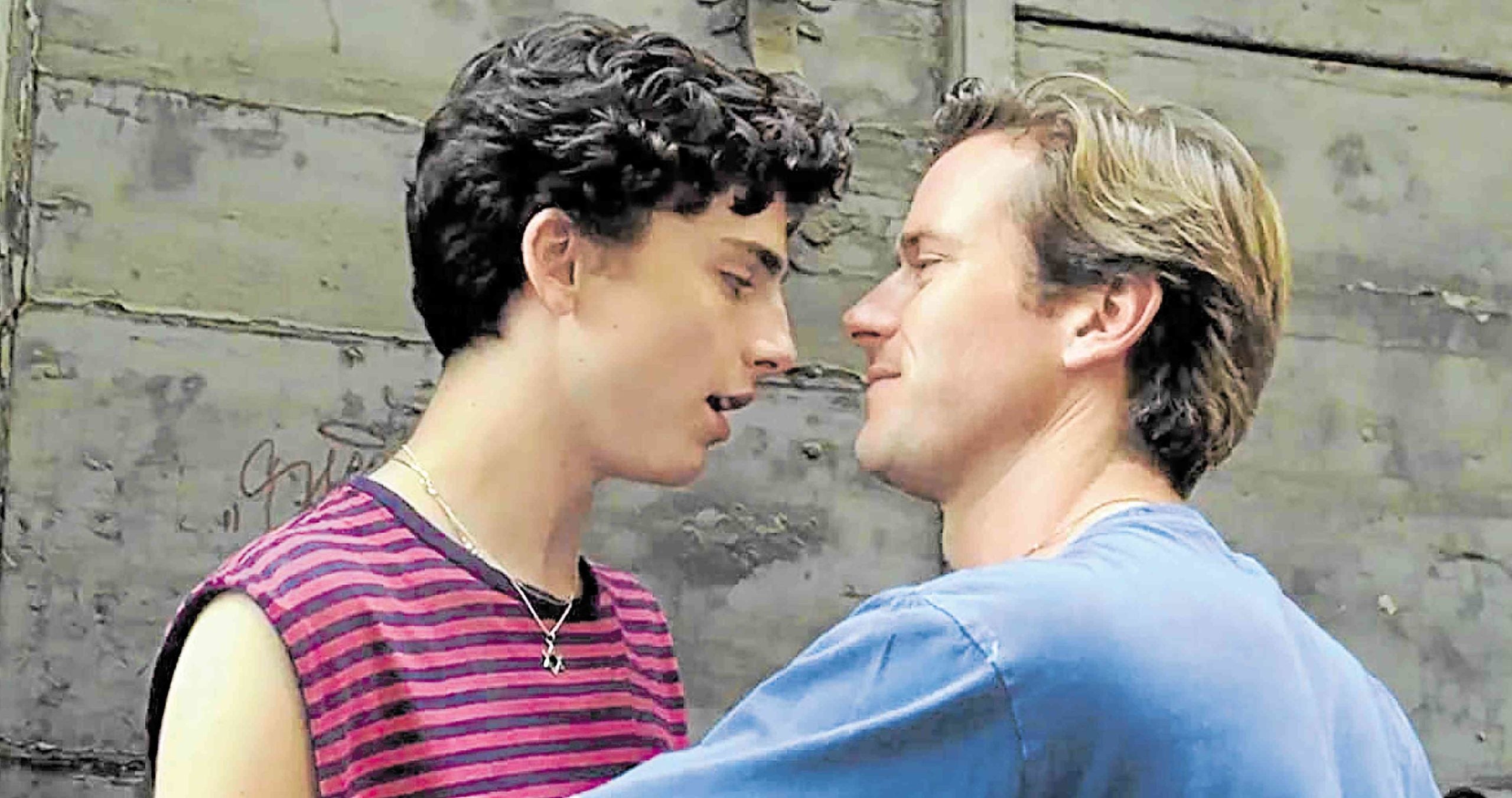 Wiith Timothée Chalamet (left) in “Call Me by Your Name”

“So, I think he saw an opportunity to have a relationship that’s different from the first one he had. Unfortunately, he hadn’t dealt with his own issues, so as a result, he just brought all them into his new relationship, as opposed to working on himself.”

As the movie shows, the second Mrs. De Winter is more than willing to do anything for the love of her life. In Armie’s case, what was the craziest thing has he done for love?

“Nothing comes off at the top of my head, but I can tell you that there’s no greater love I’ve ever felt than the one I feel for my children,” mused the actor, who has two kids with TV personality Elizabeth Chambers, with whom he “officially” separated in July after 10 years of marriage. “So, if I needed to do something crazy for my kids, I would kill and eat every single one of you if that meant that they would be safe.”