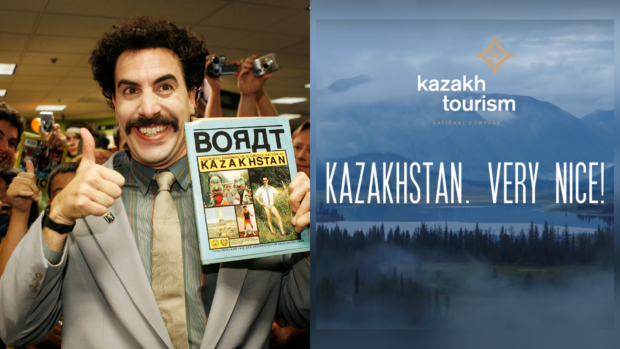 Sacha Baron Cohen’s popular catchphrase in the movie “Borat” has been adopted by Kazakhstan, where the film is set, as its newest tourism slogan.

“How can you describe a place this surprising in just two words? As a wise man one said, ‘Very nice!’” the organization said in the video’s description, referring to Cohen’s character Borat Sagdiyev.

The country did not initially favor the way the film depicted it and its people when it was first released back in 2006. Instead, the national government banned the movie and threatened to sue Cohen, as per The New York Times yesterday, Oct. 26. It also pulled out a four-page ad in the American newspaper to “defend” its honor.

But the government’s opinion on the film changed after Cohen released the trailer for its sequel last month. Kairat Sadvakassov, the deputy chairman of Kazakhstan’s tourism board, decided to just accept the movie and the attention it brought to the country.

Meanwhile, Dennis Keen, an American who moved to Kazakhstan and married a local, thought of using the films’ catchphrase when he learned of the sequel. According to the report, Keen has his own tourism company in the country.

He then worked with a friend, Yermek Utemissov, to pitch the idea to the country’s board of tourism. After getting their approval, the two began shooting in popular spots in Kazakhstan and created the four videos for free.

After hearing of Kazakhstan’s decision to adopt his character’s catchphrase, Cohen reiterated that his film is a comedy and “has nothing to do with the real country.”

“I chose Kazakhstan because it was a place that almost nobody in the [United States] knew anything about, which allowed us to create a wild, comedic, fake world,” Cohen added. “The real Kazakhstan is a beautiful country with a modern, proud society — the opposite of Borat’s version.”

Though the film’s sequel will not show the country in a better light, Utemissov believes that the citizens will not react badly to it this time around.

Read Next
LOOK: EliKoy chemistry brings the feels in BJ Pascual photo shoot
EDITORS' PICK
Unleash the photographer in you this World Photography Day with vivo smartphones
Look Through: The fate of impounded stray dogs
DOH says COVID-19 cases plateauing, but public shouldn’t be ‘complacent’
What to watch out for when selecting a video surveillance solution
23,000 cops to be deployed nationwide for school reopening
House energy committee chair Arroyo bats for cheap electricity
MOST READ
Sharon Cuneta asks for prayers for friend in ICU who suffered silent stroke
Light therapy could be the answer to your sleep problems
Korina Sanchez reunites with former ABS-CBN co-anchors Julius Babao, Cheryl Cosim
Solons file resolutions seeking probe on ABS-CBN, TV5 merger
Don't miss out on the latest news and information.