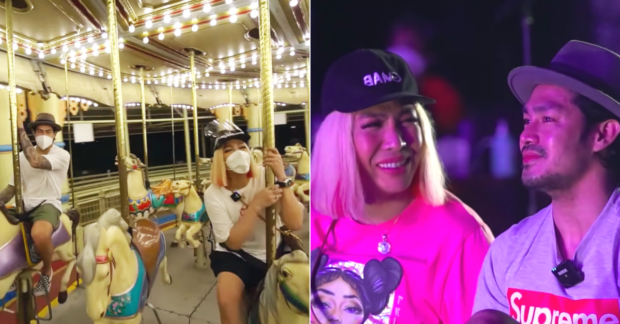 To celebrate the milestone of two years as a couple, Vice Ganda and Ion Perez had the rare chance to have a theme park just to themselves.

The couple marked their second anniversary yesterday, Oct. 25. It was more than just fun and games at Enchanted Kingdom in Laguna: the two poured out their emotions too in romantic moments together.

They also tagged friends and staff members along to make the experience more memorable. Vice assured on his vlog that everyone had taken a COVID-19 swab test with negative results.

The couple started by riding the carousel, to which Vice joked, “Kailangan mo mameet iyong pamilya ko. (You need to meet my family.)”

(We have been together for two years. You might get confused.)

To which Perez assured him, “Nag-iisa lang ganda mo eh (Your beauty is one of a kind).”

Among the thrills they took part in where bump cars, the interactive trampoline and carnival games. And while they had fun with friends — even pranking them to ride a terrifying drop tower — they still got time alone while in the Ferris wheel.

(Who could have thought that there would be a day where you can eat on the Ferris wheel… and celebrate your anniversary with your boyfriend?)

(And it feels great that we became free, that we were accepted by people.)

Vice recalled being afraid of what people would think of them before they came out as a couple.

(The happiest thing for me is when we decided to commit to this even if we were not sure what the reaction of others would be.)

He also praised Perez for being brave to be with him compared to past partners.

(There have been so many times when I loved someone but they did not have enough strength or courage to stand up for it, not even to be seen together. You are really strong.)

The night culminated with a surprise from Vice — a song he wrote with “hugot” songstress Moira Dela Torre and her husband Jason Marvin Hernandez titled “Mahal Ako ng Mahal Ko.” Vice said it was based on a poem he wrote.

Perez was left teary-eyed, the happiness between the two being apparent even on the rainy night.

Vice released the music video of the song yesterday, which features their sweetest moments together. Happy anniversary, Vice and Ion! JB

Read Next
‘No harm was done’: Miss Bohol defends KC Montero after ‘backlash’ for onstage exchange
EDITORS' PICK
Smart Prepaid encourages the youth to take their passions to the next level and ‘Live GIGA’
DOF to PITC: Return P1 billion in interest on ‘idle’ funds
Experience clearer calls nationwide with Smart VoLTE
Año to public, officials: Refrain from holding events
Arthaland’s property management arm utilizes Amazon Web Services to enhance delivery of service
Watershed degradation abetted flooding, says scientists’ group
MOST READ
April Boy Regino passes away at 59
‘What is mine is hers,’ says Matteo on sharing finances with his Popstar Royalty wife
’Blind obedience’: Robredo twits Briones for pleasing only Duterte, not teachers, students
Año: Gov’t to conduct fact-finding on mass gatherings attended by Roque, Pacquiao
Follow @NGunoINQ on Twitter
Don't miss out on the latest news and information.