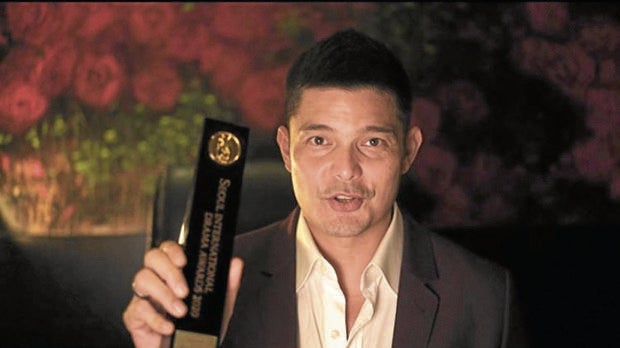 After being with his family 24/7 for seven months, leaving for work turned out to be harder than usual for Dingdong Dantes.

Dingdong and the rest of the cast of the “Descendants of the Sun” (DOTS) resumed and wrapped up their lock-in taping last September in Tanay, Rizal.

“I had sepanx (separation anxiety) because I was with my family every day for many months. I was sad. I found myself thinking about how tough things must be for overseas Filipino workers. Being away for two weeks already seems so difficult,” he said in a recent virtual conference for “DOTS,” which resumes airing on GMA 7 today.

“You know you’re going on a lock-in taping, but you don’t really know how things will go until you’re there,” he explained.

While on hiatus, Dingdong and his costars, including Jennylyn Mercado, Rocco Nacino and Jasmine Curtis-Smith, caught up with each other only through video chats. The excitement was palpable when they finally saw each other in person again.

“We were excited, not only because we had been raring to return to work but because of the relationship we have established with each other, the staff and the directors. We wanted to hug everyone. But you can’t, of course, because of social distancing,” he related.

Getting back in the zone was a little tricky, admitted Dingdong, who portrays Capt. Lucas “Big Boss” Manalo. Because he and the other actors play soldiers, they had to regain the level of physicality and technical proficiency they had when they halted the taping.

“We were in a unique situation because we had to stop taping in the middle of airing, Imagine, after almost one year of training and shooting, we were at the peak of our energy. But then we had to stop. We were shocked and hoped that the pandemic would last only for a short time,” he said.

Dingdong also felt rusty, acting-wise. “Kamote ako the first few days while my other coactors had already picked up where they left off. I told myself, ‘I have to be in character as soon as possible,” said Dingdong, who was awarded with the Asian Star Prize at the 15th Seoul International Drama Awards for his work in “DOTS,” which is an adaptation of a popular Korean drama of the same title.

Some portions of the ending episodes, Dingdong related, were already shot as early as January. And though there are different limitations and protocols in place upon their resumption, continuity wasn’t an issue because of the meticulous preproduction work and planning they did.

“They gave us ample time to prepare ourselves physically … We all sat down for script readings, we timed everything to make sure that everything will be efficient once we hit the set. We had no room for mistakes or time to do multiple takes; we had to finish as early as possible. But because of the proper preparations, everything went smoothly.”

Dingdong also praised the creatives for being able to come up with scenes that don’t look like they were hindered by the restrictions.

“Because big set action pieces aren’t allowed, we got to focus more on the romance aspect [with Maxine de la Cruz/Jennylyn]. While the action scenes are exciting, the meat, core and heart of the show are the two’s relationship with one other and love for the country,” he said.

“DOTS” will be available on Netflix on Nov. 13—a development the cast are all looking forward to. “I’m happy not only for the actors and for GMA 7, but also for all actors in general, because our work is reaching more audiences,” Dingdong said.

Despite the pandemic, the actor has remained quite busy and productive the past months, juggling show biz work and his various advocacy projects.

Aside from acting, he continues to mobilize COVID-19 relief efforts through his Yes Pinoy Foundation; he launched a delivery app called DingDong, which employs displaced workers in the entertainment industry; and spearheaded a new organization of actors called Aktor. And of course, on top of all that, he tries to be the best father and husband he can be.

Dingdong has a full plate. But there’s no better time to pursue his endeavors than now. “I’m inspired to do those things, which have been close to my heart ever since. I don’t get tired of them, because I’m passionate about them. And now I have the time,” he told the Inquirer.

“I don’t think I would have been able to do all those, say two years ago. But now, I have this chance to take on all the important things. So, I’m doing all my responsibilities wholeheartedly and passionately,” he added.

While Dingdong is now back in the television grind, his wife, Marian Rivera, has put show biz on the back burner, so she could focus on raising their two children—daughter Zia, who’s turning 5 next month, and son Sixto, 1—without worries of putting them at risk.

“I respect her decision, which was a very difficult one,” he said of Marian, who had to turn down a drama series. “I know where she’s coming from and the sacrifices she has had to make … Whatever her decision is, I would support that 100 percent.”

And if that means having to work “double time,” he’s more than willing to do it. “Perhaps I can accept less projects, too, so I could be with her at home. That or I could work double time—kailangan rin kumayod para sa pamilya. But I’m open, either way … whatever will make things easier for her. Ako nang bahala.” INQ