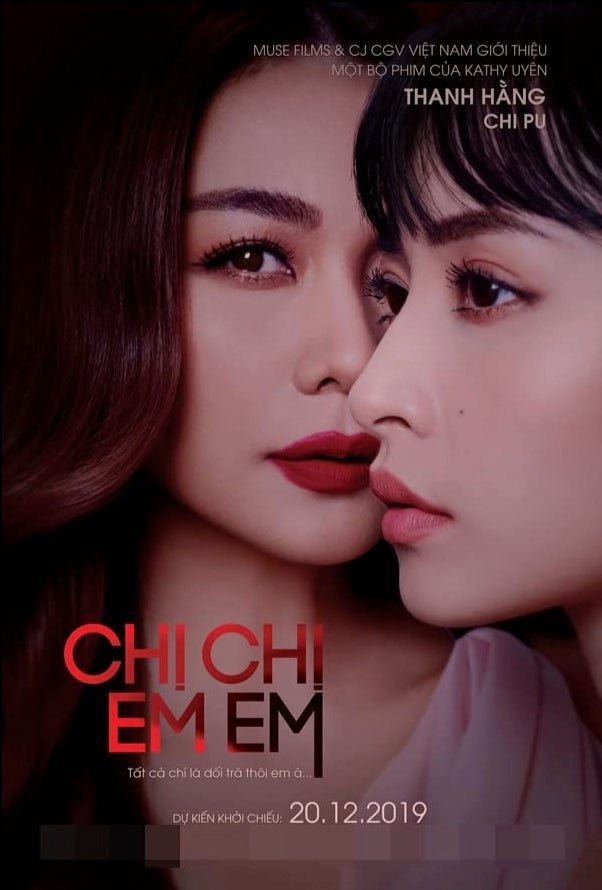 Sex, violence and LGBT relationships have long been taboo for Vietnam’s film censors, but they are now finding their way into the open as a new wave of directors push the boundaries set by the nation’s conservative communist leaders.

The latest movie to test the waters is “Chi Chi Em Em” — or “Sister Sister” — featured at Asia’s biggest film festival this week after a strong performance at the Vietnamese box office.

A psychological thriller about love, deceit and revenge, the film has sex scenes between women and a complex narrative focused on adultery and trauma — the type of movie that may have struggled to be made just five years ago.

“When I told them about the script, a lot of people said ‘you should just save your time, it’s going to get cut’,” said Vietnamese-American director Kathy Uyen.

“But I want to tell daring stories about modern women who are strong and quirky, and full of passion,” the 39-year-old told AFP.

“I don’t let fear hold me back,” she added, before the movie was screened at the Busan International Film Festival in South Korea this week.

According to government guidelines, Vietnamese films must demonstrate “good ideological content” to pass the censorship board — and pornography, violence and hostility towards the state are not allowed.

But the board is often accused of censorship beyond its remit.

Last year, filmmaker Phan Dang Di told state media the approval process was akin to “torture,” while others have admitted they self-censor to avoid an exhausting back-and-forth.

Fear of falling foul of the censors — and a conviction that cinemagoers prefer easy-to-watch romcoms — meant directors rarely dared to experiment in the past, says film critic Le Hong Lam.

But he believes the scene is changing thanks to a new generation of filmmakers, who are pulling audiences along with them.

“Over the past five years — and especially during the last two — there has been a shift in topics of Vietnamese films,” he said, referencing Le Van Kiet’s “Hai Phuong,” or “Furie,” which tells the story of an ex-gangster thrust back into her past when traffickers kidnap her daughter.

“These show that Vietnamese audiences are open to new topics, they’re not just coming to cinemas for fun. They want films that make them think.”

Despite bagging a top prize at Busan last year, the film was fined for screening without approval, and took months to clear censorship hurdles — sparking controversy in the media and on social media.

“I think that after this… the censorship board in Vietnam has started to make changes to catch up with modern tastes, not cutting things on a whim like before,” said Lam.

A lot of voices

“Rom” director Tran Thanh Huy is convinced a fresh wind is blowing through Vietnamese cinema but says it will take more than one film to shift the status quo.

“It needs a lot of voices and a lot of films to create a real change,” the 30-year-old said.

“Then we can talk to censorship authorities about being more open.”

Determined to make innovative films with unconventional narratives, he screened a version of “Rom” at Busan with an ending “open to interpretation”, but was forced into a different, happier conclusion by censors.

Still, the film took $2 million in its first week in Vietnam, pushing the case for bold storytelling.

Filmgoer Tran Hien Vy, a 21-year-old from Ho Chi Minh, says the new approach by directors — and censors — should win over young people.

“The conservative film style cannot make us spend our money and time to go to cinemas,” she said.

“Chi Chi Em Em” is another example of progress, according to director Uyen.

“The thing that I feel really happy about is when we sent it to the film censor board, they only asked me to reduce this one love scene by about 30% and take out two or three cuss words, and that was it,” she says.

Her film shows events “that happen every day in our lives,”  she adds. “I don’t think I portrayed anything shocking, but in Vietnam this is new.” IB