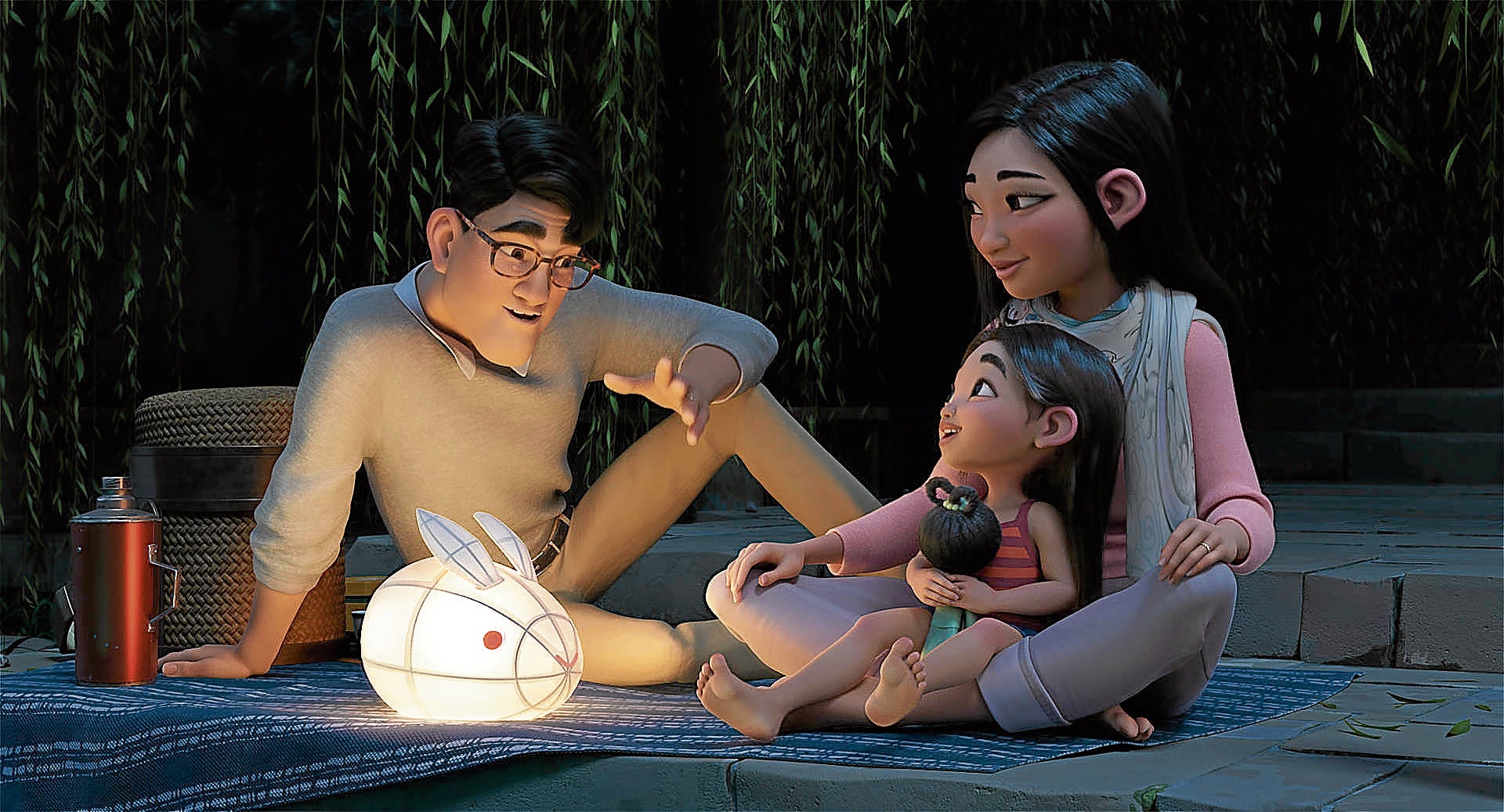 There is as much heart as prodigious talent to celebrate in Netflix’s eagerly anticipated animated film, “Over The Moon.”

The heartwarming musical, which debuts tomorrow, is lovingly realized and gorgeously brought to life by debuting director and Oscar-winning legendary animator Glen Keane (“Dear Basketball”). Glen created his “Over The Moon” characters in the same way he brought to throbbing life many of Disney’s beloved characters, including the Little Mermaid, Pocahontas, Tarzan, Aladdin, the Beast (of “Beauty and the Beast”) and Rapunzel (of “Tangled”). That’s one heck of a body of work, if you ask us!

For Filipino viewers, however, the musical drama’s biggest draw is Cathy Ang, the Fil-Am singer-actress who voices grieving young protagonist Fei Fei, a 12-year-old girl who builds a rocket that would take her to the moon to prove the existence of 3,000-year-old Moon goddess Chang’e.

The moon deity is played by the scenery-chewing musical-theater “goddess” Phillipa Soo (of “Hamilton”)—but we’ll talk about her in a separate article.

Fei Fei’s close-to-impossible mission has been born out of her need to keep the memory of her dead mother (Ruthie Ann Miles) alive. She feels betrayed by her dad Ba Ba’s (John Cho) budding romance with widow Mrs. Zhong (Sandra Oh). 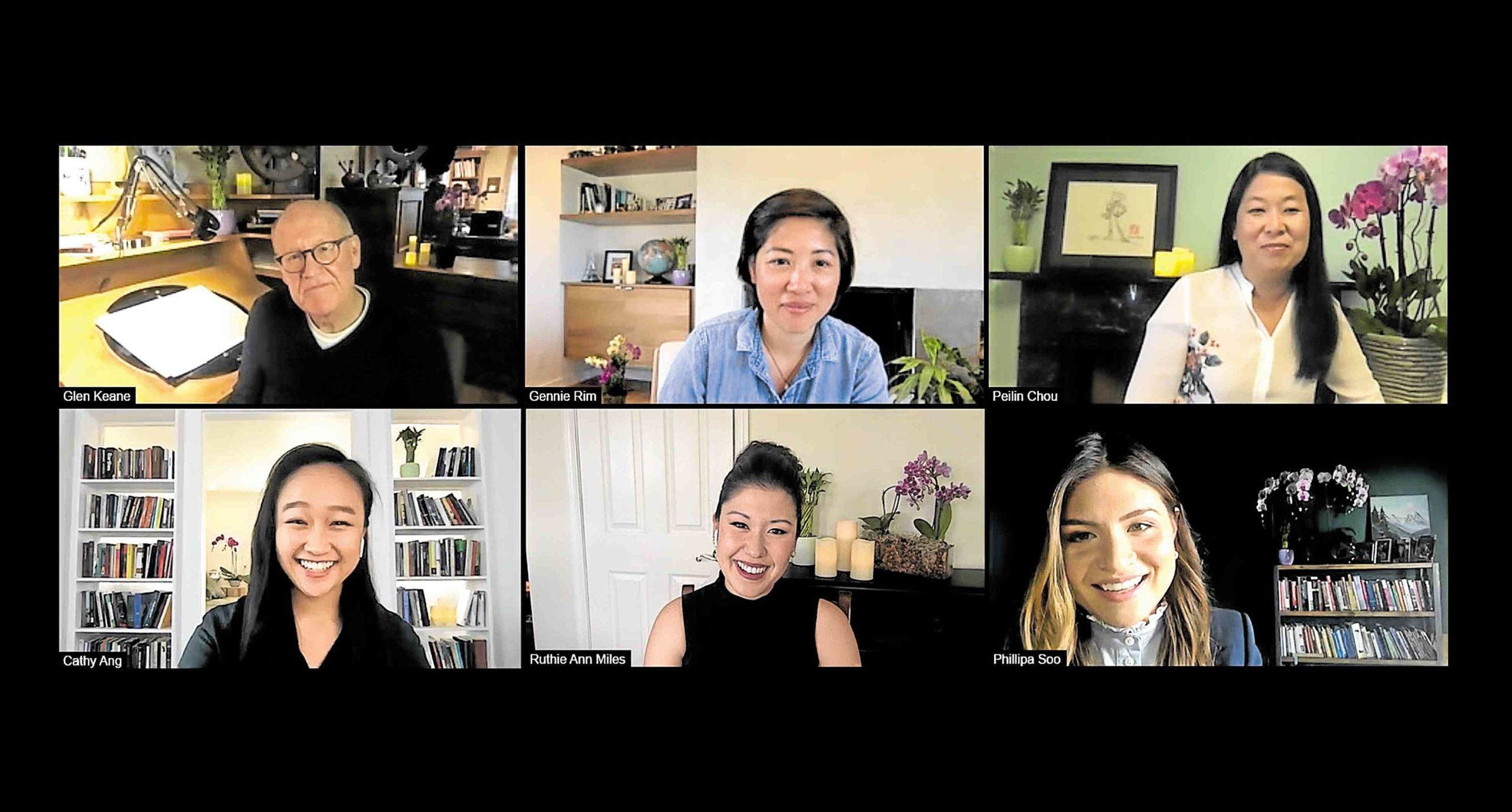 To stop the upcoming wedding, the distraught young girl needs to remind her father and their enabling relatives that true love, like Chang’e’s undying devotion to her estranged lover Houyi (Conrad Ricamora), is irreplaceable and far from fleeting.

But Fei Fei gets more than she bargains for when she, with her precocious soon-to-be stepbrother Chin (Robert G. Chiu) in tow, comes face-to-face with Chang’e, now a bitter woman transformed by heartbreak.

Among the quirky and colorful inhabitants they meet in the kingdom in Lunaria is Gobi (Ken Jeong), an exiled creature who will help Fei Fei get inside the goddess’ impenetrable Chamber of Exquisite Sadness.

While “Over The Moon” is arguably her most “mainstream” project to date, Cathy is not in any way a stranger to performing—in fact, along with Filipino-American-Singaporean actress Julia Abueva (whom we acted with in the Singapore and Philippine productions of Andrew Lloyd Webber’s “Aspects of Love” and later directed in Stephen Sondheim’s “Into the Woods”), Cathy played one of the lead roles in Ars Nova and Ma-Yi’s acclaimed Off-Broadway musical “KPOP” in 2017.

Cathy’s parents are Tsinoy doctors who were born and raised in the Philippines and later migrated to the United States. She was a bundle of feel-good energy and joy when she spoke to the local press via Zoom recently about her Filipino heritage and what it was like voicing the lead role in “Over The Moon”—and it was easy to see why viewers would instantly root for her character Fei Fei, even despite her naivete and possessiveness, when the film begins streaming tomorrow.

“Yeah, my parents are Chinese-Filipino,” the adorable, perpetually smiling actress confirmed. “My mom is from a small municipality called Bagabag (a gateway to the world-famous Banaue Rice Terraces) in Nueva Vizcaya, while my dad is from Ongpin. 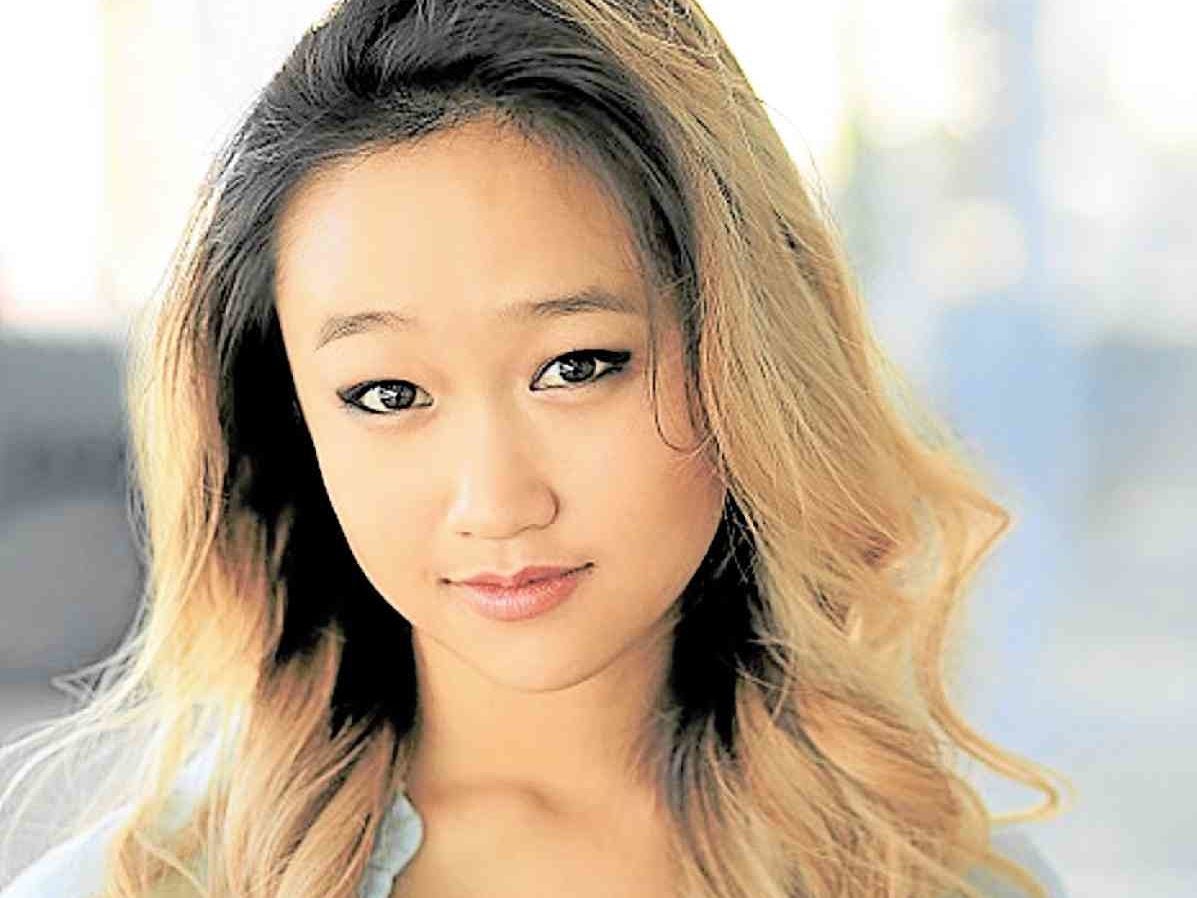 “When I was little, we would actually go to the Philippines and see a lot of extended family there. And we would visit them during Christmas. I wish that I could go back to the Philippines now. After making this film, I realized how important it is to just go and visit your roots.

“This experience has also encouraged me to talk more to my parents about heritage and traditions. I’m so thankful to them now, way more than when I was growing up, that they tried to share their culture with me and make sure I would grow up a proud Filipina. Asian-American kids everywhere will hopefully be excited about seeing their culture being celebrated onscreen.” 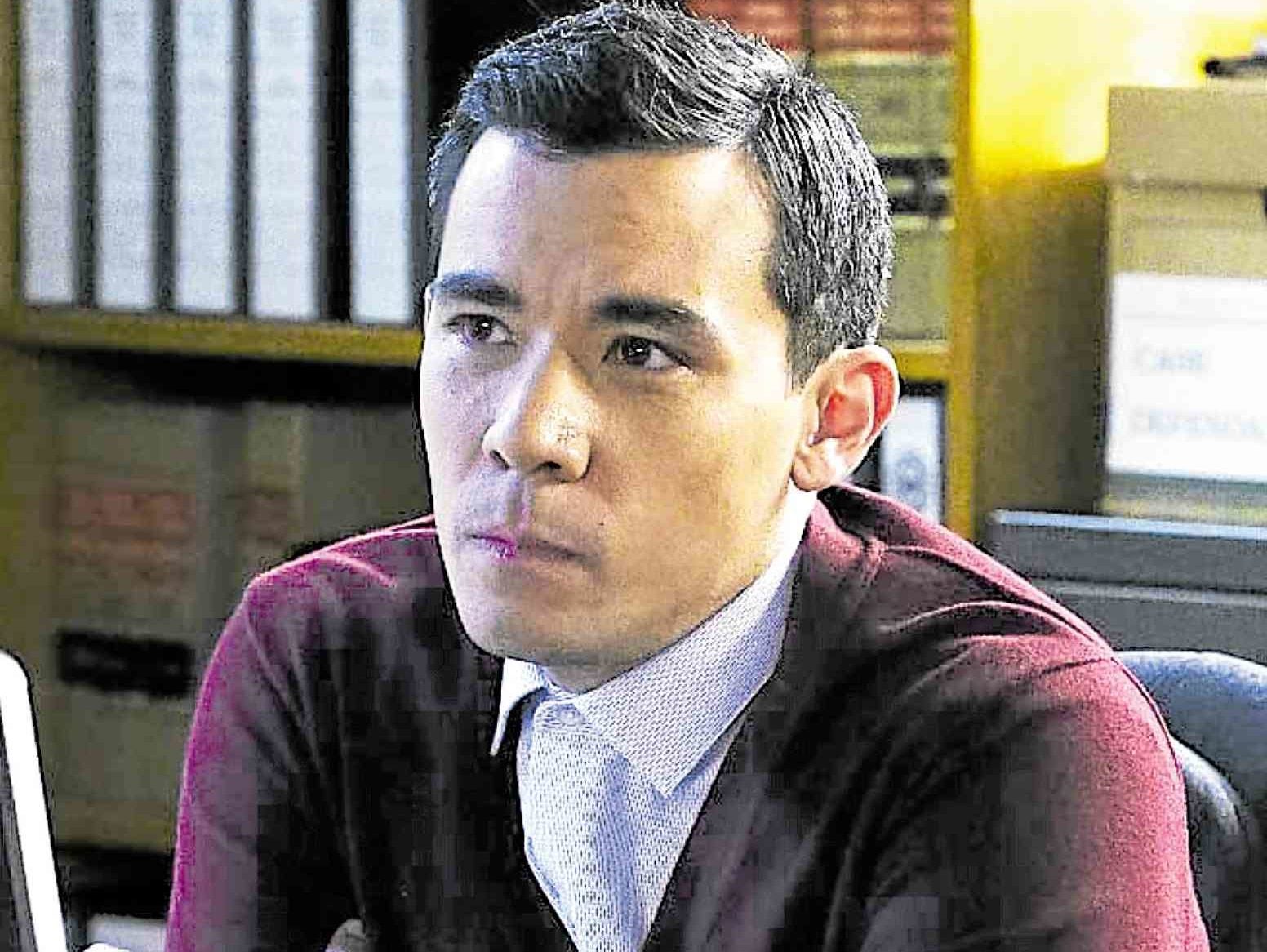 Not the only Fil-Am actor

Contrary to initial perception, Cathy isn’t the only performer with Pinoy roots worth noting in “Over The Moon.” Conrad Ricamora, cast as Houyi, is the film’s other Filipino-American voice actor who makes his potent presence felt in it, despite his character’s limited screen time.

Aside from his forays into network TV (“How to Get Away with Murder”), we’ve also seen Conrad in the flesh and in action in New York, in the Imelda Marcos musical, “Here Lies Love,” in 2013.

In David Byrne and Fatboy Slim’s acclaimed theater production, Conrad portrayed Ninoy Aquino, depicted as a hard-hitting reporter with political ambitions who broke Imelda Marcos’ heart (“I was too tall [for him],” the Iron Butterfly sang wistfully) two years before her whirlwind romance with Ferdinand Marcos (Jose Llana, another Fil-Am) ended in marriage.

As if by coincidence, the role of the former Philippine first lady was played by the beautiful Korean-American actress Ruthie Ann Miles, who portrays Fei Fei’s sick mother to heartbreaking perfection.

For Glen, a great story goes beyond race, so he works hard to get to the heart of the matter by turning fantastical tales into very personal stories of love and triumph.

He explained, “I was taught by my mentors at Walt Disney’s Nine Old Men not to animate what the character is doing, but illustrate instead what they’re thinking and feeling—that’s animating characters’ emotions inside out.

“As an animator, I look for characters who go through the biggest challenges. I love animating characters who risk everything they have and believe that the impossible is possible. This is why I was drawn to the story of Fei Fei because, well, how can a 12-year-old build a rocket? How in the world is that going to happen? 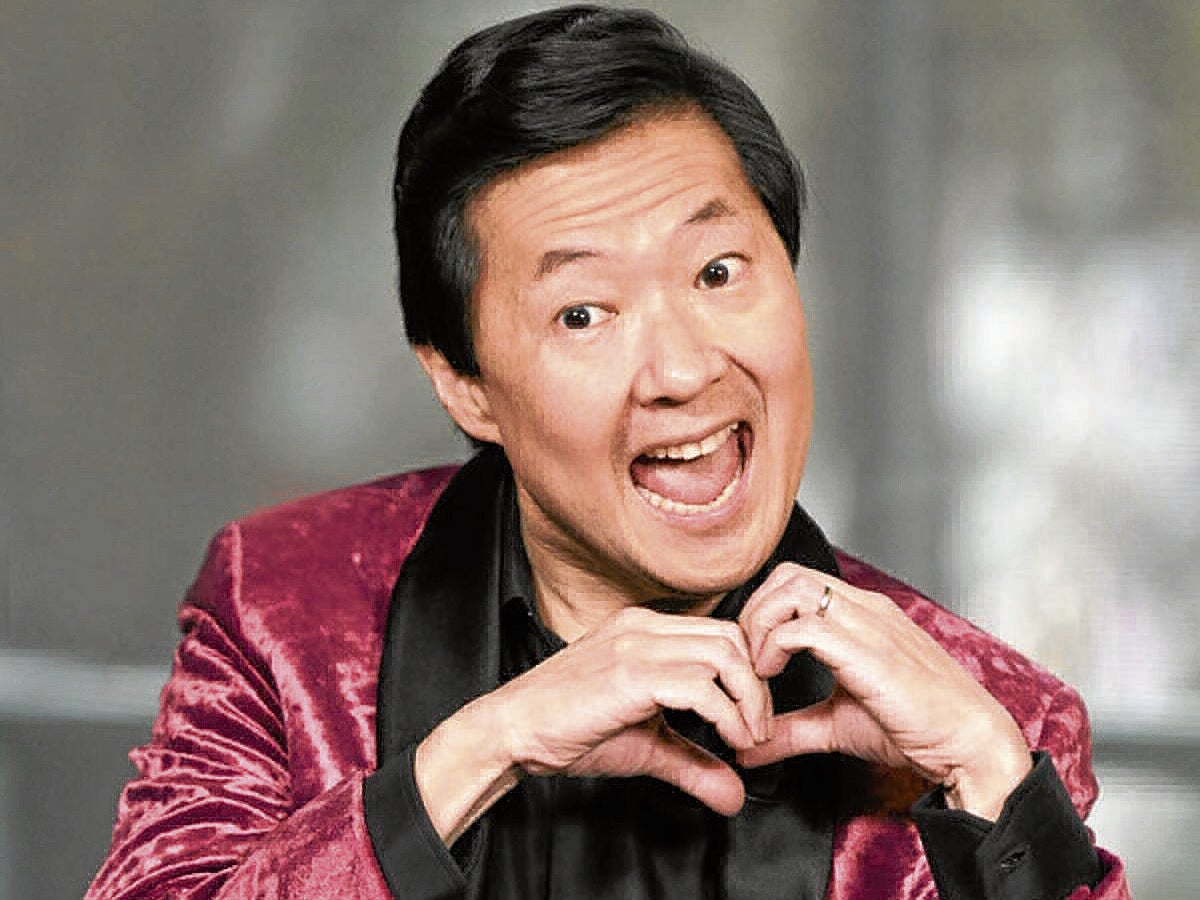 Ken Jeong explains why projects like “Over The Moon” is important

“I mean, she’s got to know science, physics and math—and she’s got to believe that there indeed is a goddess on the dark side of the moon! That requires a certain leap of faith and imagination—elements that are in all of the characters that I’ve animated. They all have that spark. It was the same with Kobe Bryant (in his Oscar-winning short, ‘Dear Basketball’)—he had that same belief that the impossible was possible in his own life. Both characters, Kobe and Fei Fei, live out that same kind of impossible dream.”

In Inquirer Entertainment’s separate exclusive interview with Korean-American Ken Jeong, who plays Gobi and even sings in the film, the doctor-comedian underscored the importance of Asian representation in mainstream Hollywood.

“As a very proud Korean-American, [increased exposure] is really important,” Ken told us. “That’s why projects like ‘Over The Moon’ that’s coming out on Netflix with an all-Asian-American voice cast is special. Then, there’s also ‘Crazy Rich Asians,’ which I was a part of. It also had an all-Asian cast.

“Having as many Asian-Americans as possible at work just makes [casting them in mainstream projects] more normal. It’s not just ‘a thing’ anymore. I’m driven to show that it’s not that big a deal, so let’s see if it works. That’s the kind of project I’d like to be a part of.

“Those productions (‘Over The Moon,’ ‘Crazy Rich Asians’) are two of the most important projects I’ve ever been a part of in my career—and I’m mighty proud of that.”