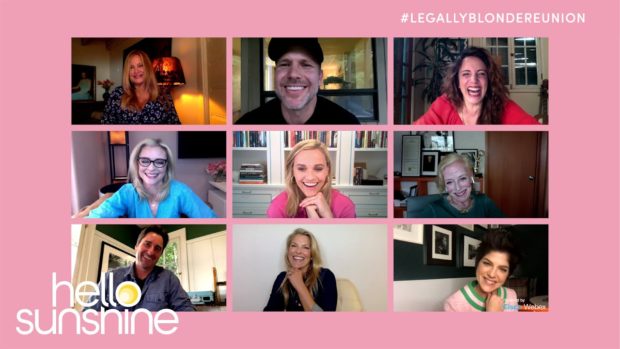 “Legally Blonde” stars including Reese Witherspoon, Luke Wilson and Jennifer Coolidge reunited via a video call to support a charity amid the COVID-19 pandemic.

The get-together will benefit the World Central Kitchen, Witherspoon said on her media company Hello Sunshine’s YouTube page earlier today, Oct. 21. The group helps provide food to those in need across the United States.

Witherspoon, who played the lead role of Elle Woods, started the video call by expressing her love for her character.

“I think she just inspired people to believe in themselves,” she said. “She’s inspired me to really keep an open mind and always be an advocate for myself and for other people in this world.”

She also explained that they decided to hold the reunion since it has been almost 20 years since the movie was released.

Throughout the video call, Fineman asked the cast about their favorite lines and the process of creating the movie. Witherspoon then fondly recalled how her fans still remember the iconic “Bend and Snape” scene with Coolidge, who played Paulette.

Along with the said scene, Witherspoon said that people also often quote her character’s famous line: “What? Like it’s hard?”

Meanwhile, Cauffiel, who was already cast as Margot at the time, revealed how she helped Ubach practice for the latter’s audition for the role of Serena.

As the call ended, Witherspoon could not help but get emotional at the sight of her costars.

“I can’t tell you what it means to me to see your faces. This was my college. This is where I went to college. I didn’t finish college but I finished ‘Legally Blonde,'” she said.

“We all worked together and made this movie together that has inspired so many young people,” she added. “It’s just such a gift.”

Following the reunion, MGM Studios revealed on Twitter that “Legally Blonde 3” is set to premiere in May 2022.

The upcoming films will be written by actress-writer Mindy Kaling. She last worked with Witherspoon in the 2018 fantasy-adventure film “A Wrinkle in Time.”  /ra