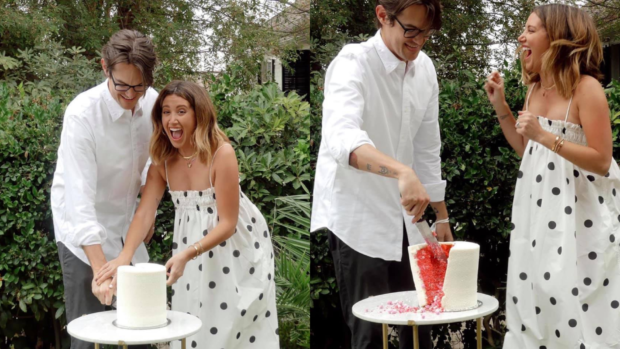 Ashley Tisdale revealed that she will soon be welcoming a baby girl with her husband, composer Christopher French.

“This year has obviously been hard. For so many. Ups and downs, and an emotional roller coaster,” the mom-to-be said.

“I think this day was by far my favorite day EVER!” Tisdale expressed. “I cried I was so happy.”

Choosing to forego a grand gender reveal party, the married couple simply sliced a white cake to share whether they were having a son or a daughter.

Tisdale could not hide her excitement when they sliced the cake, as seen in photos she posted. She then cheered when French turned the cake around and showed to the camera that its inside was dyed pink.

Following their simple celebration, Tisdale also had some advice for those “going above and beyond for gender reveal parties.”

“A cake with the color inside is JUST as rewarding as fireworks but SAFER!” she said, referring to a gender reveal party that triggered a wildfire in California last month. Tisdale also ended her post with the hashtag  #SheSoFrench.

Tisdale announced that she is pregnant with her first child last Sept. 17. She and French tied the knot back in September 2014.  /ra