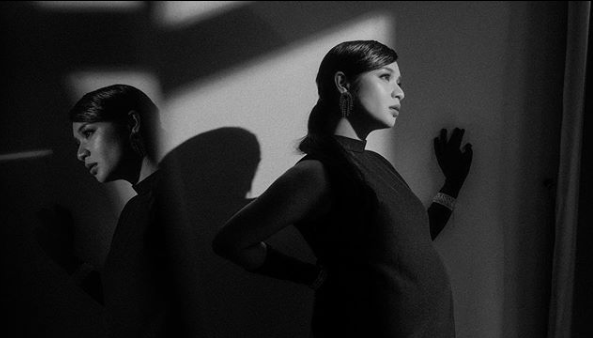 Ryza Cenon is due to give birth in November 2020. Image: instagram/@iamryzacenon

Just a month before she is due to give birth, Ryza Cenon flaunted her baby bump one more time in a new maternity shoot where the mom-to-be showed off some “classy” vibes.

Cenon once again took to Instagram from Oct. 12 to 13 to share pictures from her photoshoot with Nice Print Photo.

“Motherhood is wonderful, but it’s also hard work. And you also get to discover that you have reserves of energy you didn’t know you had,” she said on a black and white photo posted on Oct. 12.

“Stay classy mama!” Cenon said on another post on Oct. 12, which contains several photos from the shoot, one of which shows her with boyfriend, cinematographer Miguel Antonio Cruz.

Cenon donned an all-black outfit, complete with gloves, a hat and a black dress that was outlined by her baby bump.

“God has a perfect timing; never early, never late. It takes a little patience and faith, but it’s worth the wait,” Cenon said on the following post containing another batch of photos, several of which feature Cruz.

Staying true to the classy theme while emphasizing Cenon’s pregnancy, the latest batch of photos the mom-to-be shared was of her holding a wine glass with milk, not alcohol.

“Don’t forget to drink your milk [every day],” Cenon quipped.

Cenon has previously flaunted her baby bump in July with another maternity shoot, while also showing off her new short hairstyle then. She shared in late July the first sonograms of her baby.

The 32-year-old actress recently appeared on television shows “Ang Probinsyano” and “The General’s Daughter.” Before becoming a Kapamilya artist in 2018, Cenon spent over 10 years with GMA, starting way back in 2005 when she won in the network’s reality TV contest “Starstruck.” JB