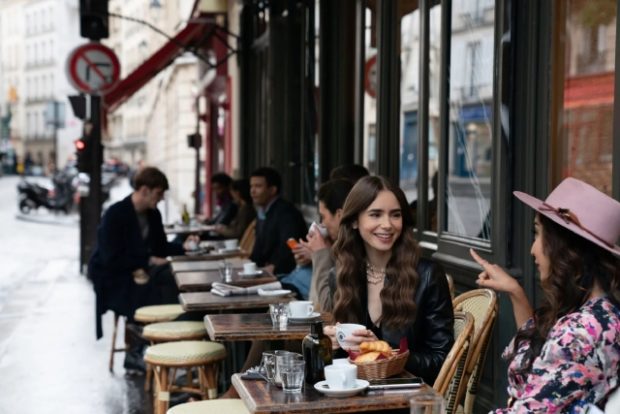 From “An American in Paris” and “Midnight in Paris” to “Before Sunset”, the French capital has played host to a slew of Hollywood productions. These movies and TV shows have often made Parisians bristle with their blatant lack of realism and easy stereotypes. The latest in line is a new show from Darren Star called “Emily in Paris,” released October 2 on Netflix.

The “Sex and the City” creator has gone all-out in sending Netflix viewers worldwide a picture postcard from the French capital. From haute couture fashion to Michelin-esque meals and spacious offices in Haussmannian buildings, “Emily in Paris” has it all. The show follows the adventures of a bright young executive from Chicago who heads to Paris when her company buys a French marketing agency specializing in the luxury sector.

This expatriation holds all kinds of surprises for the character, played by Lily Collins, not to mention for French viewers. First, there’s the question of her less-than-modest 50-square-meter apartment in a chic neighborhood a stone’s throw from the Panthéon. This kind of apartment would be out of reach for the majority of Parisians, who are all too familiar with the extortionate cost of housing in the city.

“How much does she earn? Because with a 30 sq. m. apartment, shopping at Chanel and the dry cleaning costs she must rack up, we’re easily at three times the minimum wage, at least. The salaries of junior marketing executives have changed,” said Pauline, of the Perle ou Navet podcast, on Twitter.

French viewers were just as surprised by the show’s fictitious marketing agency, where Emily works alongside colleagues who are an arrogant, cliché-ridden bunch. While the company’s boss takes the liberty of greeting coworkers with kisses, Emily’s own manager happily puffs away on cigarettes in the comfort of her office — an eccentric Gallic habit outlawed by the country’s Public Health Code since Nov. 15, 2006.

“Didn’t anyone tell the screenwriters that no one smokes in offices in France anymore and that CEOs would never kiss a foreigner who comes to work in their firm? These clichés are ridiculous,” said one Twitter user.

An ‘American perspective’ on Paris

While the stereotypes may seem trivial, many viewers also regretted the lack of diversity in the cast of Darren Star’s new series, which fails to reflect the multicultural nature of French society. This phenomenon has been analyzed by the journalist Alice Pfeiffer in her book, “Je ne suis pas Parisienne” [I am not Parisian], deconstructing the myth of the legendary Parisienne which Emily strives to emulate with her designer outfits and trips to pavement cafés.

As amusing as it may be, Emily’s learning curve has failed to win over critics on both sides of the Atlantic. “Plucky, cheerful and arrogant, Emily plops into Paris determined to ‘bring an American perspective’ to French branding, never once considering that her proud cultural ignorance is actually a weakness, not a strength,” reads The Hollywood Reporter’s review.

In spite of its shortcomings, “Emily in Paris” seems to please viewers around the world, who sent it to the top of Netflix’s most-watched shows, according to data from FlixPatrol. This popularity forms part of a long cinematographic tradition, inciting Hollywood to make Paris a hotspot for its plotlines.

“It’s the mythical city that inspires, the Paris of culture, of liberty, of pleasure, more than the urban reality… to the extent that it gets turned into a studio set A picture postcard Paris that reflects, beyond all the clichés, American neuroses,” said Antoine de Baecque, a French historian and former curator of the “Paris seen by Hollywood” exhibition.

“Paris says more about American desire than the French capital. That’s why the cliché falls into its own trap, as the cinematographic revelation of a collective subconscious.” Seen that way, perhaps Parisians could have a newfound appreciation for “Emily in Paris”. NVG