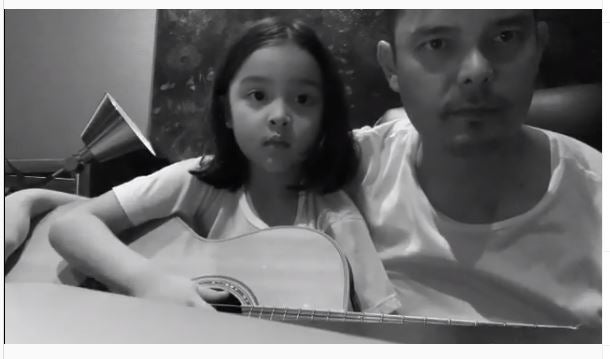 MANILA, Philippines — Actor Dingdong Dantes’s busy days are often spent with more joy when his daughter Zia visits him in his work space with musical surprises and quality time.

In an Instagram post on Friday, the actor shared how Zia frequently spends time with him to watch videos or join in guitar lessons.

“Usually, we’d watch a clip in her favorite YT (Youtube) channel, read about her current favorite scary story, or just simply talk about how exciting her day was,” Dingdong wrote in an Instagram post on Thursday.

“Occasionally, she would join me as i struggle to learn new songs on the guitar— as of writing, it’s already 5 months since I started my formal lessons with @yanyuzon — and I haven’t even completed any of the three (3) songs that I have been practicing on!!” he added.

On Thursday night, Dingdong said he was so touched after his daughter serenaded him with a version of “Stand By Me” by Ben E. King which Zia refers to as “When the Night.”

He shared a video showing Zia’s small hands strumming the guitar while singing “Stand By Me”.

“Tonight, that little one just walked up to me while i was in the middle of studying ‘I am I Said’ of Neil Diamond. She went behind the guitar, hugged it from my standpoint, and started to strum. She said, ‘Dad, let’s sing this song.’” Dingdong wrote.

“She did her thing. She strummed— not yet with chords ha— and sang. In the process of executing each stroke, each breath— i was melting,” Dantes added.

“She calls this song When The Night…Well, she can call it whatever she wants. What’s sure is that i’ll stand by her, even if the moon is the only light we’ll see! Naaakanam!!” the actor further said.