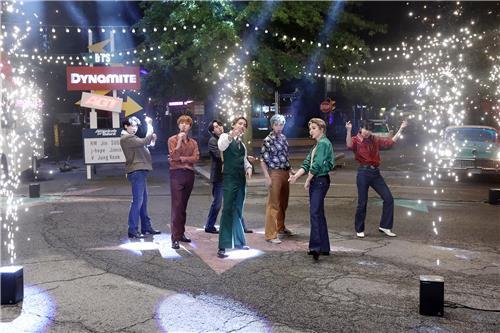 The dance video reached the milestone Friday at 10:30 p.m., 35 days after it was posted on the video-sharing site, according to Big Hit Entertainment.

It garnered the number in the shortest time among K-pop videos.

The video attracted 101 million views in the first 24 hours of release on Aug. 21, setting the record for single-day views.

BTS became the first South Korean act to top the Billboard Hot 100 chart last month thanks to the disco-pop single.

The group unveiled a new choreography music video of “Dynamite” on Friday (US time) through the popular online game “Fortnite” run by Epic Games.

The song rose two notches to rank 19th on the Official UK.

Singles Chart on Friday, according to the leading British music tracker.

The track debuted at No. 3 five weeks ago on the chart and has continued to fall since, coming in at 21st last week. Yonhap