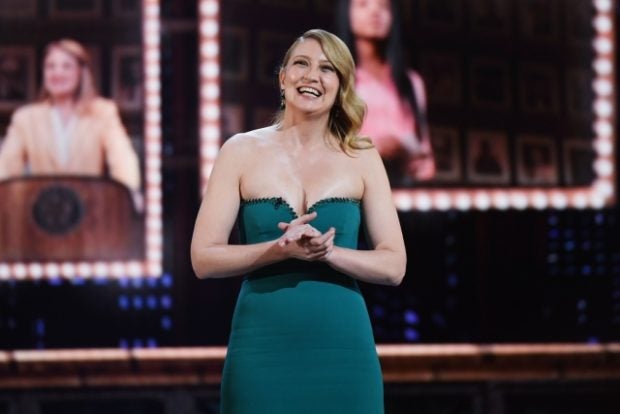 ‘What the Constitution Means to Me’ by American playwright Heidi Schreck will soon be available in the Amazon Prime Video catalogue. Image: Shutterstock/Andrew H. Walker via AFP Relaxnews.

News that the multi-award-winning play “What the Constitution Means to Me” is coming to Amazon Prime Video is proof that it is only a short step from Broadway to the small screen.

The Heidi Schreck drama is due to drop on the streaming platform on Oct. 16, a development that has notably been inspired by the recent success of the musical “Hamilton” on Amazon’s competitor Disney Plus.

“What the Constitution Means to Me” was filmed in its entirety by American director Marielle Heller at the Helen Hayes Theater in New York, where the autobiographical play premiered in March 2019.

In “What the Constitution Means to Me”, Schreck recreates on stage debating contests in which she participated when she was 15 in an attempt to earn money for her university studies.

The drama, which was nominated for several Tony Awards both for the quality of Schreck’s writing and her performance, gave the American actress and playwright an opportunity to touch on themes like immigration as well as sexual and domestic abuse.

“I’m delighted with how beautifully Mari Heller has translated ‘Constitution’ to the screen and I’m thankful to Big Beach and Amazon Studios for making it possible to share the show with more people — especially right now when we can’t gather together in theaters,” Schreck said in a press release.

The playwright has also signed an exclusive partnership with Amazon Studios to create content for the Prime Video streaming platform.

“What the Constitution Means to Me” will be available in 240 countries and territories around the world when it drops on Oct. 16.

In adding the theatrical production to its catalogue, Amazon is seeking to reproduce the success of the musical “Hamilton”, which recently landed on rival platform Disney Plus.

According to the agency Apptopia, the show by Lin-Manuel Miranda, which is about one of America’s founding fathers, was watched 750,000 times on the first weekend following its release on the streaming platform.

In response to the upsurge in enthusiasm for theatrical productions, HBO has announced that the David Byrne play “American Utopia” will release on its streaming platform on Oct. 17.

For its part, Netflix has revealed that it also has small-screen adaptations of “The Boys in the Band” and “The Prom” in the works. All in all, there is plenty for theater lovers to look forward to in the months to come. CC

Amazon, Disney both at work on musicals

TAGS: 'What the Constitution Means to Me', Amazon Prime Video, Disney Plus, Heide Schreck, playwrights, Theater