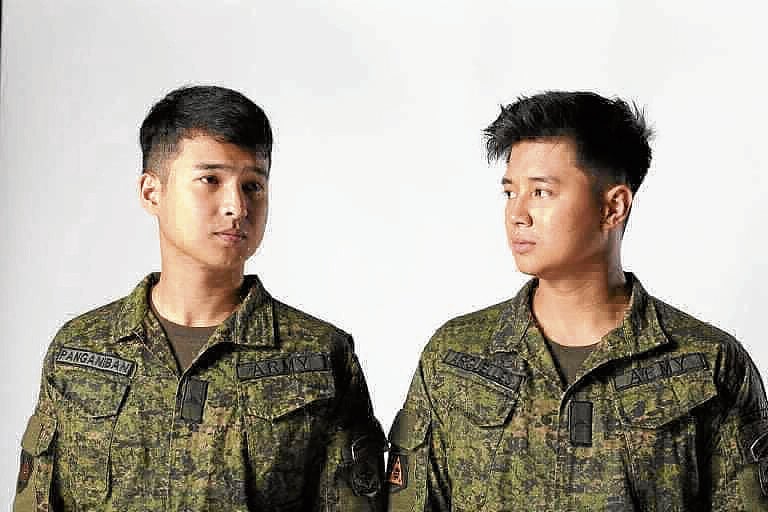 Jerome Ponce (left) and Yves Flores in “A Soldier’s Heart”

“We were always careful. We didn’t want to offend the sensibilities of the real men in uniform,” said Yves Flores when asked about his thoughts on the positive feedback of viewers on the romance between his character Benjie Arguelles and Jerome Ponce’s Phil Panganiban in the war drama series, “A Soldier’s Heart.”

The tandem of Phil and Benjie, collectively known as PhilJie, has created a lot of buzz on social media, with some netizens even describing their BL (Boys Love) story as “inspiring.”

“A Soldier’s Heart,” with Gerald Anderson in the lead, airs its finale tonight on Kapamilya Online Live.

“Ours was more natural compared to the other BL stories that can be seen these days,” observed Jerome. “Phil and Benjie’s story began with the audience not having any idea of how the two characters’ friendship would progress. It started with friendship or brotherhood as its foundation. This later went up to a higher level: [romantic] love. That, I think, was how the audience got hooked to their story.”

Yves then pointed out that while the other BL stories featured characters that are “more expressive of what they feel for each other,” the story of PhilJie is nothing like that.

“This was because we wore the military uniform in most of our scenes, and we wanted to show respect for the uniform,” Yves explained. “We’re consciously not too touchy. Walang maraming pakilig. We didn’t hold hands or hug. We expressed our love through our eyes, through our gaze.”

Viewers also talked about the good chemistry between Jerome and Yves online. This was why, during a recent media gathering, they were asked whether they were open to doing an actual BL series or movie in the future, to which Jerome responded with a quick “yes.”

When the idea of a love story between two military men was pitched to Jerome, he admitted that he had been concerned first with what the reaction would be of the real-life soldiers they have worked with in the series.

“But they said this happens in the military anywhere in the world. We actually heard interesting love stories from the soldiers who joined us in the series, as well as those who were with us during training,” said Jerome. “Some even said these gay soldiers are braver in battle than the straight ones.”

Jerome added he was confident that the writers of the show “thought hard about the issue and did a thorough research on it first before including it in the list of topics that we tackled in the program.”

“A Soldier’s Heart” head writer Jerry Gracio agreed: “The show took three years to make. Before doing it, a lot of research had been made. The love story between these two characters was already part of the story of our soldiers early on.”

Meanwhile, Yves admitted that before agreeing to play the gay soldier Benjie, he had asked a lot of questions from the production team. “I’m really very protective of Benjie. I didn’t want to offend our Filipino soldiers,” he pointed out. “I was conscious of my performance. I didn’t want to go overacting, just like how most actors portray gay characters on TV. I’m careful with how I move and speak.”