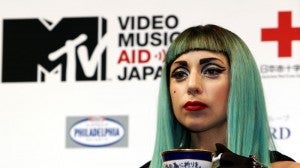 Lady Gaga holds a coffee cup with a "We pray for Japan" message during a press conference to promote MTV Video Music Aid Japan in Tokyo Thursday, June 23, 2011. Lady Gaga is in Japan to attend the MTV event to help support people in the tsunami-hit northeastern Japan. AP

TOKYO—An emotional Lady Gaga pledged Thursday to use her star power to “remind the world that Japan is safe” following the March 11 earthquake, tsunami and nuclear disasters.

The performer, ranked this year’s most powerful celebrity by Forbes magazine, is in Tokyo for the charity concert MTV Video Music Aid Japan, to be held on Saturday at a convention hall in Chiba near Tokyo.

“I believe it’s time to look forward now,” a teal-haired Lady Gaga — or Lady Gaga-san as she is referred to in Japan — told reporters at a press event in Tokyo as she sipped tea on stage in front of photographers.

She said she would auction off her tea cup to raise funds for the Red Cross.

The American singer has so far donated around $3 million for people in the disaster zones, including revenues from selling a wristband that her Haus of Gaga behind-the-scenes creative team produced, and personal contributions, according to local media.

“I would like to use my position here today and all week-long to run around Tokyo and enjoy the beautiful city and kiss all the beautiful little monsters,” she said, referring to the name she gives to her fans.

She pledged to “scream at the top of my lungs that everyone should come to Japan and visit this beautiful place.”

Foreign arrivals to Japan in May plunged by half from a year earlier, a third straight monthly drop following the March quake, tsunami and nuclear disasters.

The massive March 11 earthquake and tsunami left more than 23,000 people dead or missing on Japan’s northeast coast and crippled a nuclear power plant that has been leaking radiation into the environment since.

Officials stress that there is no danger from radiation in Tokyo and other popular tourist destinations such as Osaka and the ancient capital of Kyoto.

At the press event, US ambassador John Roos also stressed that “Japan is open for business” after exchanging hugs and kisses with the performer.

“I had breakfast with some US-Japan think-tank experts who said to me, Mr Ambassador, what can we do in order to strengthen the strategic, economic and people-to-people relations between Japan and the United States?”, he said.

“And I had one answer. Lady Gaga.”