BTS: ‘Our sincerity has overcome language and race’ 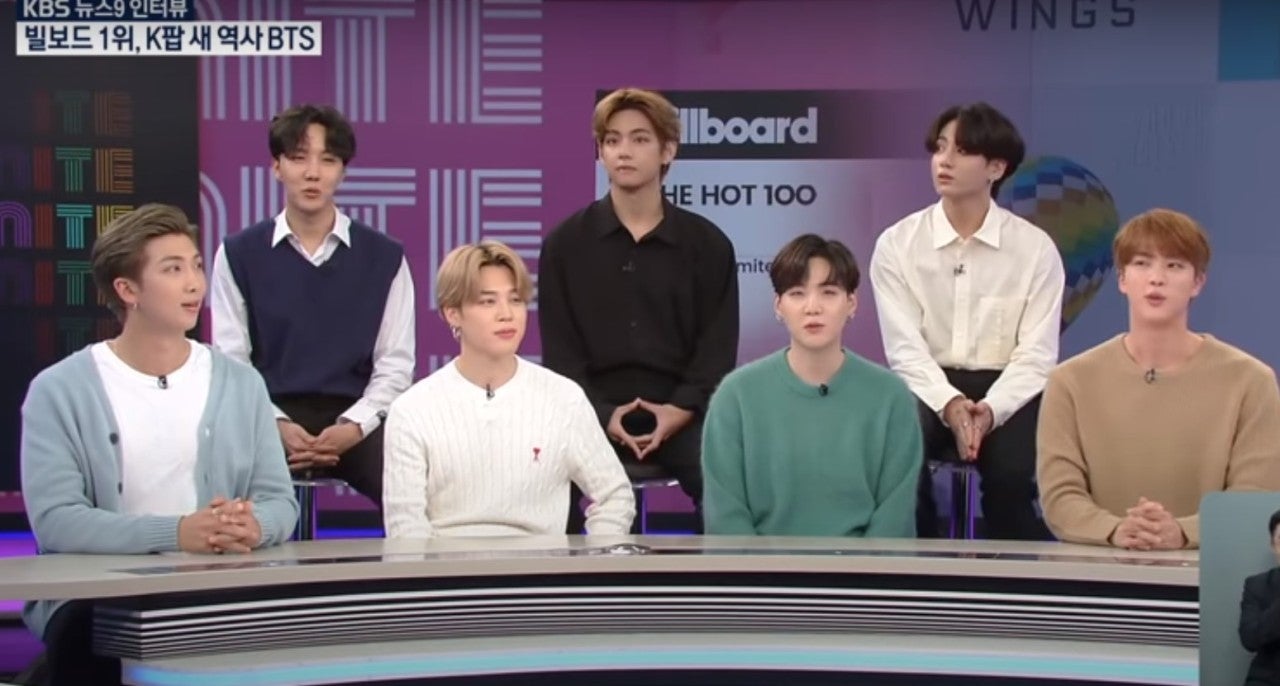 SEOUL — With the gigantic success of “Dynamite” under their belt, BTS took to KBS News 9, one of the most-watched news shows in Korea, last Thursday.

Throughout the 20-minute interview, the seven bandmates shared their thoughts on the recent No. 1 debut on Billboard Hot 100, looked back on their seven-year career and talked about their Grammy ambitions.

“We are still overwhelmed with the Billboard Hot 100 success, and feel wistful for not being able to share this joy with our fans face to face. But we are honored to be here on the news. I hope ARMYs can be excited as well,” said Jimin.

The group’s leader continued, “We definitely didn’t expect it to be there for two weeks in a row. We entered the Hot 200 chart in 2015, and I think there was a certain point we kept knocking on ever since. We didn’t calculate how to enter the charts. I think it was our sincerity to overcome language and race, which has appealed to many fans, and has eventually exploded now with ‘Dynamite.’”

Looking back on the band’s early days, the musicians said that they’ve personally grown to be more flexible after going through ups and downs together for seven years. But one thing that remained intact was their love for fans and music.

“There was a time when we had to catch flies in our dormitory and only eat chicken breast,” Jin recalled. RM chimed in and said, “By having faith and respect in each other and a little bit of space from each other, we could have come this far. It’s like riding in one boat together, but setting our individual sights in different directions.”

BTS also went on to talk about its upcoming album that is set to drop sometime this year.

“One thing you should know is that all of us have participated a lot in the new album,” said Jungkook.

While the group kept a lot under wraps, Jimin shared that the record would express various emotions of the bandmates, while RM said that they would convey a message that the seven 20-somethings thought as most necessary at this time of their lives. “I hope all of the songs from the upcoming album could enter Hot 100,” said Jimin.

On the group’s next musical goal, Suga confirmed that their next goal was getting recognition at the Grammys, putting on a solo performance and winning an award.

Despite the canceled world tours, BTS is set to fill the rest of the year with various events. Aside from releasing the new album, the group will hold a concert – still undecided whether it will be a virtual or not – in October. The group is also set to perform NBC’s “America’s Got Talent” on Sept. 17 and “iHeart Radio Music Festival” on the 19th.

Wrapping up the interview, the bandmates expressed their affection toward ARMYs and delivered a message of hope.

“ARMYs are the ones who’ve stood by our side since our difficult days, who’ve shared our joy and sadness, who know us best,” said V. J-Hope also emphasized the importance of keeping connected and intimacy through alternative means in the pandemic era.

“This situation gives me a heavy heart. Actually, ‘Dynamite’ wouldn’t have come to this world if COVID-19 didn’t happen. We feel sorry to even talk about the hardships of people going through difficult situations,” said RM.

“But as they say that the good comes with the bad, I believe something good will happen. We will do our best at what we can do, so I hope everybody to take heart and stay healthy.”