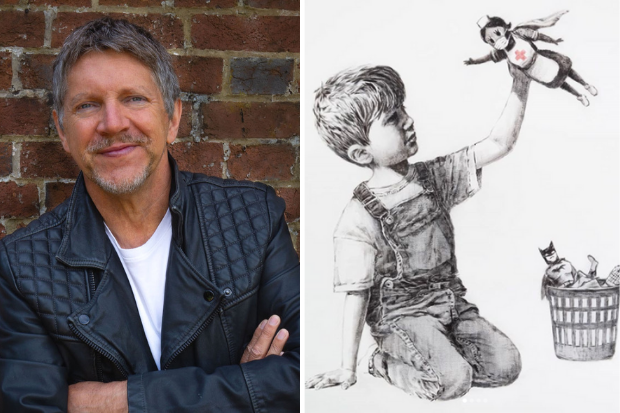 As the identity of British street artist and activist Banksy remains a mystery, netizens have come up with the theory that everyone’s childhood art guru Neil Buchanan might just be the elusive artist.

Buchanan, the co-creator and former host of hit children’s television show “Art Attack”, however, shut down the claims through a statement released on his official website yesterday, Sept. 7.

“Neil Buchanan is NOT Banksy,” the statement read.

“We have been inundated with enquiries over the weekend regarding the current social media story. Unfortunately this website does not have the infrastructure to answer all these enquiries individually, however we can confirm that there is no truth in the rumour whatsoever,” the site added.

Buchanan, a multi-awarded TV presenter and artist, is also a musician and was part of the 1970s heavy metal band Marseille, which he reformed in 2010 to release one more album.

It was also noted that Buchanan has been spending quarantine with “vulnerable members of his family and is now working on his new art collection for 2021.”

Banksy, meanwhile, has recently been releasing new art amid the lockdown, including “Game Changer”, his tribute for health workers as they fight against the COVID-19 pandemic.

Another artwork of the mystery artist that gained fame amid the pandemic is his “work from home” piece featuring rats, which were shown to be making a mess in his bathroom.

The conspiracy theory gained traction on Twitter last week when netizens began making connections between the two multi-award-winning artists. One @Scouseman_ claimed that it is “rumored” that Buchanan is indeed Banksy.

“Just heard that it’s rumoured Neil Buchanan is Banksy. If true, it’s the funniest sh*t ever. Aintree’s finest. He’s a musician and art has followed in the cities of shows he’s done allegedly,” the netizen said in a Sept. 4 tweet, which has gained over 1,800 retweets.

Just heard that it's rumoured Neil Buchanan is Banksy. If true, it's the funniest shit ever. Aintree's finest.

He's a musician and art has followed in the cities of shows he's done allegedly.

This is straight in the believe without question category . pic.twitter.com/LWU48wGekR

The tweet gained mixed reactions, with some hoping that it is true while others just dismissed the theory altogether, even before Buchanan officially debunked the rumors.

Others are pointing out, however, that denying the claims is what Banksy would actually do, but the mystery to the artist’s real identity remains.

Some, meanwhile, are taking part in the conspiracy theory just for the fun of it.

“What if Neil Buchanan doesn’t know he’s Banksy? Like, it’s a personality that takes over his body at night?” Twitter user @400FootGhost posted earlier today, Sept. 8.

What if Neil Buchanan doesn't know he's Banksy? Like, it's a personality that takes over his body at night?

Banksy made headlines in late August when he revealed that he bought a yacht and is funding a mission which would use it to rescue refugees at the Mediterranean Sea. JB