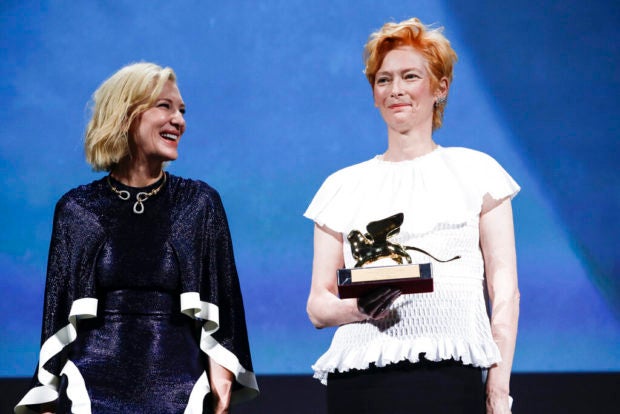 Actress Tilda Swinton, right, holds the Golden Lion for Lifetime Achievement, which was presented by Jury President Cate Blanchett during the opening ceremony of the 77th edition of the Venice Film Festival in Venice, Italy, Wednesday, Sept. 2, 2020. (AP)

VENICE  — Two stars at the Venice Film Festival, Cate Blanchett and Tilda Swinton, have praised the decision by the Berlin festival to award gender-neutral prizes, with Swinton predicting other award ceremonies will follow suit.

Organizers of the Berlin International Film Festival announced last month that they would stop awarding separate acting prizes to men and women starting next year. The best actor and actress Silver Bear prizes will now be replaced by best leading performance and best supporting performance awards.

Swinton, who received a Golden Lion Lifetime Achievement award at the Venice festival’s opening ceremony, said divisions by gender were a “waste of life.”

“And so I’m really happy to hear that about Berlin,” she told reporters Thursday. “And I think it’s pretty much inevitable that everybody will follow, because it’s just obvious to me.”

Blanchett, president of the Venice jury this year, said she instinctively calls herself an “actor.” She said it’s hard enough “to sit in judgment of other people’s work” and then even harder to break it down further along gender lines.

“I’m of a generation where the word ‘actress’ was used always in a pejorative sense. So I think I claim the other space,” she said. “I think good performances are good performances, no matter the sexual orientation of the performers who are making them.”

The Venice festival has long been criticized for the lack of female directors in its in-competition films, with only four films made by women in the 62 films competing for the top Golden Lion award between 2017 and 2019.

This year, the gender parity has improved, with 44% of the in-competition films directed by women.

French director Nicole Garcia, whose film “Lovers” is competing for the Golden Lion, said she hoped she and her fellow female directors were chosen to participate in Venice on merit and not to achieve a certain gender quota.

Insisting on boosting women directors in the ranks at festivals, she said, was actually “anti-feminist.”

Garcia’s film stars Stacy Martin as Lisa, who loves her drug-dealing boyfriend but marries a wealthy developer after the boyfriend flees when a drug deal turns bad. The film takes a dark turn when the lovers cross paths again.

Swinton was also in Venice to present a short film directed by Pedro Almodovar, “The Human Voice,” about a woman’s emotional response to being left by her lover over the phone.