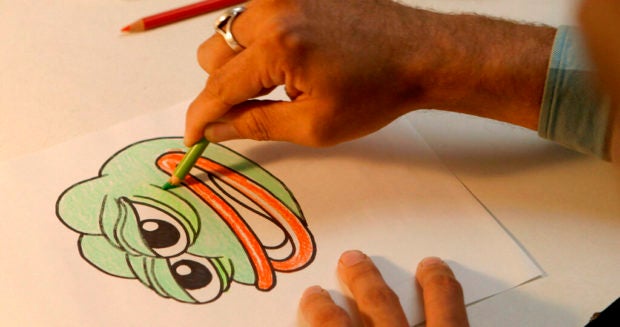 This image released by Ready Fictions shows in a scene from “Feels Good Man,” about an artist battling to regain control of his creation Pepe the Frog. Image: Kurt Keppeler/Ready Fictions via AP

“I didn’t even know what a meme was,” confesses cartoonist Matt Furie in the documentary “Feels Good Man,” demonstrating just how ill-equipped he was to resist the dark forces that engulfed him and his creation, Pepe the Frog, during the brutal election season of 2016. “I still don’t know if I’m saying it correctly.”

Most of us know what a meme is by now. But we may not all be acquainted with the anthropomorphic amphibian know as Pepe. And in a way, it’s better to approach “Feels Good Man,” directed by Furie’s friend and fellow cartoonist Arthur Jones, without knowing too much. Because seeing what happened to Furie and his chill stoner frog dude — spoiler alert, he became a hate symbol of the alt-right — will likely make your blood run cold. It sure makes for a chillingly effective internet-era cautionary tale.

The story begins back in 2005 when Furie, an amiable San Francisco-based artist, decides to draw, rather crudely, a frog character for his comic series “Boy’s Club”. Furie had always been enchanted by frogs. “It’s been a slow drip of frogs throughout my entire life,” he says in the film. 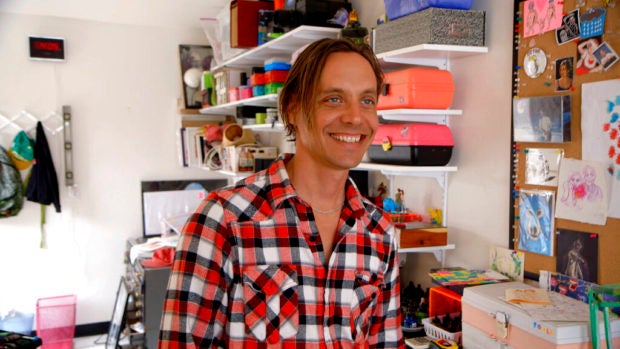 This image released by Ready Fictions shows Matt Furie in a scene from “Feels Good Man,” about an artist battling to regain control of his creation Pepe the Frog. Image: Kurt Keppeler/Ready Fictions via AP

This particular frog had a penchant for, well, an unusual way of urinating. Why? “Feels good man,” he would say. Hence the catchphrase. It was no more complicated or sophisticated than that.

But, as director Jones tells it, with the use of some clever, often beautiful animation as well as abundant archival footage and commentary from a host of sources (including a “memetist”), Pepe was to embark on a strange and terrible journey.

At first, the constant appropriation of the image isn’t too troubling. It starts with fitness videos. “I was just, haha, whatever,” says Furie. But then things get ugly.

The “sad frog” becomes a favored image among users of the anonymous message site 4chan, a culture, one commentator says, “of saying the most offensive thing.” And as Pepe grows more popular and mainstream, with his image used by celebrities like Katy Perry and Nicki Minaj, some users get angry and seek to reclaim the frog from so-called “normies” (normal people).

Pepe pops up as an evil perpetrator of the 9/11 attacks, or as a symbol of hatred against Black people and Jews. He appears surrounded by swastikas, in what one expert calls “the Nazified Pepe.” The frog becomes “this impossible mixture of innocence and evil,” smiling that familiar grin as he commits atrocities, notes another.

And then comes the election, and the candidacy of Donald Trump, and the use of Pepe as a symbol by young supporters. In October 2015, Trump himself retweets an image of him as Pepe.

In one of this jam-packed film’s most effective sequences, director Jones shows us the web message traffic in which an alt-right supporter says he is, at that moment, attending a Hillary Clinton rally. People urge him to shout out “Pepe!” And then we see him do it.

The message board goes wild. Rachel Maddow describes the incident on MSNBC: “To the white supremacist, anti-Semitic, neo-Nazi alt-right in this country, that was a moment of triumph,” she says.

In the fall of 2016, the Anti-Defamation League puts Pepe on its list of hate symbols, a crushing blow for Furie. Less than a year later, in May 2017, the cartoonist tries to “kill” Pepe by literally having him die, in a comic strip, and burying him.

But the genie has long been out of the bottle, and it’s made painfully clear here that Furie waited too long to fight. When he learns of the existence of a children’s book using Pepe to push anti-Muslim themes, Furie finally enlists the pro bono services of a high-powered law firm, Wilmer Hale, to successfully halt the release of the digital version.

Furie also successfully sues a number of other entities, including Infowars’ Alex Jones for his use of Pepe in posters (footage of the depositions of both Furie and Jones is fascinating.)

But the cartoonist fails to convince the ADL to remove Pepe from the hate symbol database. Never do you feel more sorry for Furie than when he tells an official there: “This is going to be a lifelong journey for me, because I’m going to be entangled with this character forever.”

Yet the film ends on the unexpectedly positive note of the repurposing of Pepe once again — this time, seemingly out of nowhere, by youthful pro-democracy protesters in Hong Kong. Suddenly the frog is being spray-painted on walls as a sign of hope.

“To me he has already become my hope,” says a young protester carrying two stuffed Pepes. “Also, I believe that one day his frowning face will smile.” They are heartwarming words, but one senses the story of this frog is far from over.