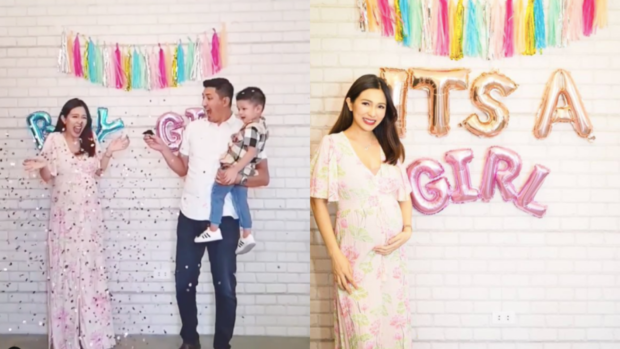 The couple revealed their second child’s gender through a simple, do-it-yourself celebration, as seen on her Instagram page last Monday, Aug. 31.

The short video showed Angeles popping a black balloon that Leaño held while carrying their son, Viktor Alesso. Once the actress pierced the balloon with a needle, pink confetti burst out of it.

Angeles also announced the baby’s gender by posing beside balloons that spelled the phrase “It’s a girl.”

“Our family is complete!” she expressed.

Along with the balloon, the family also enjoyed a birthday cake filled with another surprise–Angeles and her son broke open the cake’s surface with a hammer to see various pink candies inside.

Angeles is now 30 weeks into her pregnancy. The couple first revealed they were expecting another child last April.

Angeles and Leaño tied the knot in January 2016 and welcomed Viktor Alesso in October 2017.  /ra