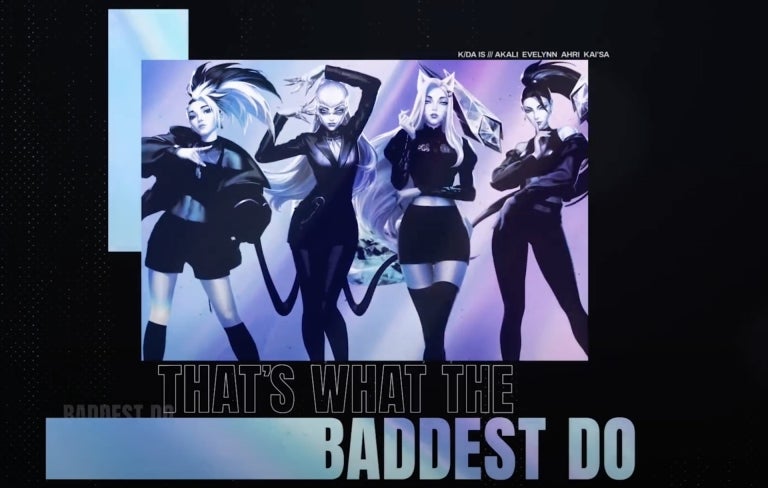 Ahead of this year’s “League of Legends” world championship in Shanghai in September, the virtual members of K/DA have made their return with the new single “THE BADDEST”.

For the occasion, “League of Legends” characters Ahri, Evelynn, Akali and Kai’Sa have collaborated with real-world K-pop stars Soyeon and Miyeon of K-pop girl band (G)I-DLE as well as American singers-songwriters Bea Miller and Wolftyla.

“THE BADDEST” marks the long-awaited follow-up to “POP/STARS” which debuted with a live performance at the 2018 world championships. At the time of its release, the catchy single notably topped the Billboard World Digital charts and iTunes’ K-pop charts.

Time will tell if “THE BADDEST” will replicate the success of “POP/STARS” which has garnered more than 366 millions views on YouTube to this date.

Aside from releasing “THE BADDEST”, K/DA teased that they will unveil a full EP at a yet-unannounced date later this year. Details about the project are still scarce to this date, although “a wide breadth of artists” contributed to the forthcoming EP.

Music continues to be a big part of the “League of Legends” experience, as California-based video game developer Riot Games introduced the virtual hip-hop collective True Damage at the 2019 world championship in Paris.

Uncertainty around the 2020 “League of Legends” world championship

Riot Games still has to confirm whether K/DA will perform at this year’s “League of Legends” world championship, which is scheduled to take place from Sept. 25 to Oct. 31 in Shanghai.

Earlier this August, the esports tournament organizer announced that it will rely on “local guidelines” to decide whether in-person audiences will be allowed for the championship’s finals.

“We continue to use the guidance from various health organizations and local and national authorities to prioritize safety for our players, fans, and everyone involved with bringing Worlds 2020 to life,” Riot said in a statement.