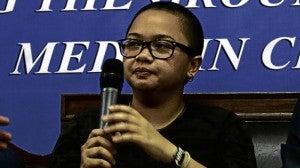 AIZA Seguerra admits she lost interest in school when she became a breadwinner. Photo by Lyn Rillon

Aiza Seguerra said she lost interest in school when she became the family breadwinner. She made this revelation at the first Child Summit held recently and organized by the Movie and Television Review and Classification Board (MTRCB).

“I got bored with school. I was already working so I thought, ‘This is it; I don’t need algebra,’” Seguerra said during the open forum. Other former child stars who were at the gathering were Niño Muhlach, Sheryl Cruz, Roderick Paulate, Robi Domingo and Rayver Cruz.

“My mom was a teacher and my dad was a government employee. We weren’t poor; we were okay,” Seguerra related. “My parents said I could quit show biz anytime but I was afraid that if I stopped working, we’d have to return to our old lifestyle. I didn’t want that.”

Aiza joined show biz in 1987 via the “Little Miss Philippines” segment of the noontime show “Eat … Bulaga!” In 1997, with a string of movies under her belt, she took time off. She came back as a singer in 2001 with the hit ballad “Pagdating ng Panahon.”

Paulate said his father initially opposed his being an actor. “But my mom, who used to be an actress, urged me on. My dad had to relent, on condition that I prioritized school. If my 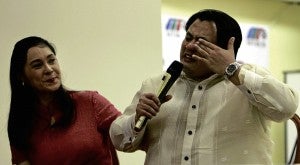 NIÑO Muhlach gets emotional as he recounts the farsightedness of his dad Alex, who served as his manager. Sheryl Cruz, left, says she’d have become a teacher had she not joined the movies. Photo by Lyn Rillon

grades dropped, he said, he would pull me out of whatever project I was in.”

The Quezon City councilor added: “I expected to see many parents at this summit. Enforcement of rules should start at home.”

Muhlach, who became popular in the 1980s, said no laws or guidelines protected children in show biz at that time. “I was just fortunate that my dad set rules for me and was very strict in implementing them. He made sure that I went home from work early. He set aside a portion of my earnings for my future. And instead of buying property and building a house, he built a building under my name!”

Domingo, who hosts the reality program “Pinoy Big Brother,” graduated last March with a degree in health sciences. “It was tough to work in television while in school. But ABS-CBN managed to create an environment conducive to learning. Also, I insisted on a cut-off time,” he said.

Rayver, who has been working since he was 9, now co-owns a restaurant-bar in Parañaque City. He pointed out: “A career in show biz is not always permanent because viewers’ interest is fleeting. One should always have a backup plan.” 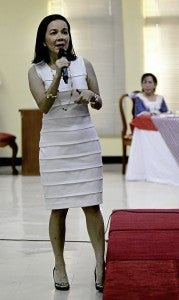 His cousin, Sheryl, said she would have become a school teacher had she not landed in show biz. “I taught college mathematics for a while when I lived in the United States,” she said.

MTRCB chair Mary Grace Poe-Llamanzares said it was imperative “to have a more effective system of child protection in media.”

She explained: “We are here for three main reasons: to examine, establish and promote the lines of communication for the welfare of child actors and viewers. There are laws already in place but unfortunately, like many other laws [they lack] proper and consistent implementation.”

In her welcome address, Llamanzares pointed out: “No amount of government legislation or initiative will ever be enough if parents do not take on the primary role of protecting their children. In our classification campaign, we remind viewers: Ang tamang gabay ay nag-uumpisa sa bahay. We can lay the groundwork for child protection but, ultimately, it is the parents’ informed judgment that counts most.” 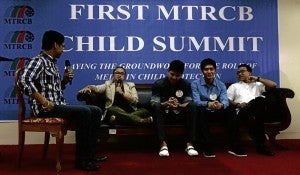 Llamanzares said the MTRCB planned to initiate talks with DepEd on the possibility of requiring schools to indicate students’ birthdays on their school IDs. “This will help determine admission to theaters,” she said. “We’re also aiming to standardize cable classification advisories, which are implemented only on free TV at the moment.”

The MTRCB is also set to resume meetings with child experts and movie producers “to discuss the benefits and feasibility of adding a new classification for movies—the R16 rating,” Llamanzares added.

The event culminated in the signing of a memorandum of understanding among the stakeholders. The summit was hosted by MTRCB members Gladys Reyes, Leah Navarro and Eugenio Villareal. Broadcaster Anthony Taberna facilitated the open forum with the former child stars. There was also a special performance from Julian Duque, 11, the award-winning actor-violinist.