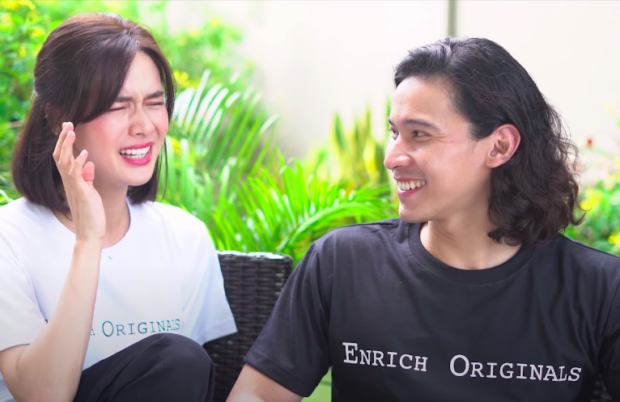 After teasing fans with an upcoming digital series, onscreen partners Erich Gonzales and Enchong Dee revealed that they will actually be creating new shows and even feature films through their YouTube channel Enrich Originals.

The two announced through a vlog posted on Aug. 24 their plans for the channel while also sharing how they came up with the project in the first place.

They revealed how the channel was supposed to be mainly for vlogging, although they changed their minds to fulfill requests from fans.

(It started when we first decided that, ‘hey, let’s vlog.’ Then we saw your comments and suggestions and we realized how much you miss seeing our tandem again.)

Gonzales and Dee then decided to “professionalize” their new venture, saying they have hired a scriptwriter, a cameraman and a lights man so they would have the complete package.

“[And] at the same time, we will be able to deliver kung ano man ‘yung nire-request ninyo (whatever you guys will request),” Dee explained.

The actor added that they are “very kilig” as the project will also be a new learning experience for them while they get to entertain their audience.

The two will be uploading Enrich Originals content weekly, according to Gonzales. They have also promised to produce series and films of different genres.

Fans were also encouraged to share what they would like to see from the two so they could adjust since they are still in the process of completing their first series.

They also called on fans to submit their original songs so they can collaborate and feature them for their series. Those interested can contact them through [email protected]

The origins of Enrich

The longtime onscreen partners also looked back at several of their projects together, which all started with the 2009 series “Katorse”. The show’s 11th anniversary coincided with the same day that their announcement was made.

(“Katorse” is memorable for me because I got my first lead role there, and after that, it just continued. And that is where we were first teamed up.)

Gonzales also revealed to fans that when the show was looking for a third leading man, she was the one who suggested to get Enchong Dee for the show.

One of the said show’s writers, Noreen Capili, will be rejoining Gonzales and Dee as the writer for Enrich Originals.

Since “Katorse”, the two have gotten partnered up for several other projects such as “Tanging Yaman”, “Magkaribal”, “Maria la del Barrio” and “The Blood Sisters”, among many others.

Gonzales and Dee also noted that they have already worked in nine projects together and Enrich Originals will be their 10th. JB