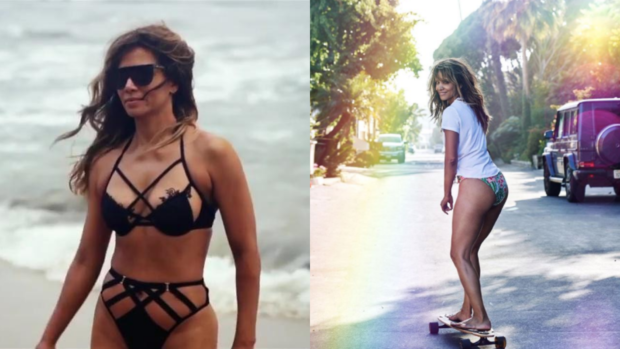 The award-winning actress kicked off her celebration with a photo of her skateboarding in a white shirt and bikini bottoms, as seen on her Instagram page.

The day after, Berry stunned in a slow-motion video of herself in a black cut-out bikini while she walked on a beach.

Berry also sported a bright-orange bikini reminiscent of the one she wore in her iconic scene in the 2002 James Bond film “Die Another Day.”

Following her birthday, Berry posted a photo of her waking up in Las Vegas with a person her fans call her “mystery man.” The picture showed her feet resting on the unknown man’s feet as they lay in bed.

Berry first sparked rumors of her being in a relationship again after posting a similar photo last month. The two appeared to be outdoors as they enjoyed a Sunday together.

Berry’s latest relationship was with producer Alex Da Kid, whom she dated briefly in 2017, as per Essence magazine last month. Prior to that, she was married to French actor Olivier Martinez for three years before getting divorced in 2016.

The actress shares a 6-year-old son named Maceo with Martinez. She also has a 12-year-old daughter named Nahla, whom she shares with her former partner, model Gabriel Aubry.

Berry made history as she became the first African American woman to win the Oscar for Best Actress back in 2002. She was recognized for her performance in the 2001 romantic drama film “Monster’s Ball.” Ryan Arcadio /ra

Jennifer Hudson, sister Julia give away 2,000 bags of school supplies to kids