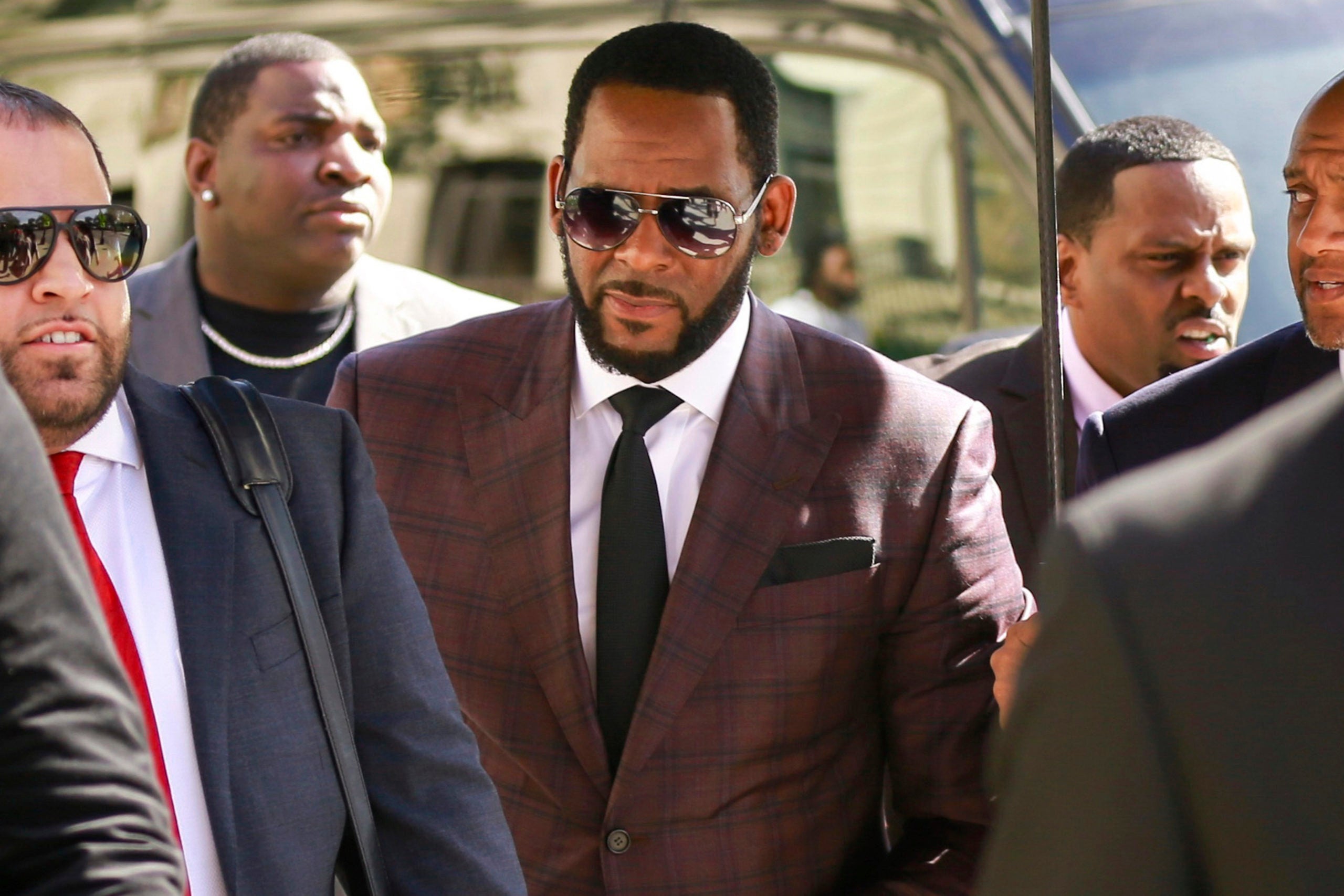 In this June 26, 2019 file photo, R&B singer R. Kelly, center, arrives at the Leighton Criminal Court building for an arraignment on sex-related felonies in Chicago. Federal prosecutors announced charges Wednesday, Aug. 12, 2020, against three men accused of threatening and intimidating women who have accused Kelly of abuse, including one man suspected of setting fire to a vehicle in Florida. (AP Photo/Amr Alfiky, File)

NEW YORK — R. Kelly’s manager has been arrested on charges that he threatened a shooting at a Manhattan theater two years ago, forcing an evacuation and the cancellation of the screening of a documentary addressing allegations that the singer had sexually abused women and girls.

Donnell Russell, 45, of Chicago, was charged with conspiracy and with threatening physical harm by interstate communication. He was scheduled to appear remotely Friday before a magistrate judge in Manhattan federal court. It was not immediately clear who will represent him in court.

The charge comes on the heels of Russell being charged in Brooklyn federal court earlier this week with harassing a Kelly victim and her mother after the unidentified woman filed a lawsuit against Kelly. Authorities said Russell sent a letter to the woman’s lawyer with cropped nude photographs of her and later sent her a text warning her: “Pull the plug or you will be exposed.”

In the latest case, authorities said the threats by Kelly’s manager and adviser in December 2018 forced the cancellation of the screening of Lifetime’s “Surviving R. Kelly” series at the NeueHouse Madison Square as police took precautions, although they determined that there was no imminent threat.

Acting U.S. Attorney Audrey Strauss said in a release that a number of the Grammy award-winning R&B singer’s accusers were to attend the screening.

“Threats of gun violence aimed at intimidating and silencing victims of sexual abuse are unlawful as well as unacceptable,” she said.

William F. Sweeney Jr., head of New York’s FBI office, said it “defies logic that a threat like the one alleged here could stop victims from speaking about their alleged abuse.”

Sweeney said Russell succeeded in shutting down one airing of the documentary but failed to silence the women featured in the film.

“Each and every day, we do everything in our power to make sure victims of sexual abuse have the opportunity to be heard, and will continue to do so regardless of those who allegedly use violence as a means to stop them,” he said.

Kelly remains jailed in Chicago after pleading not guilty to dozens of state and federal sex crime charges in Illinois, Minnesota, and New York.

The charges range from sexual assault to leading a racketeering scheme aimed at supplying Kelly with girls. Kelly also is accused of having unprotected sex with a minor in 2015 without disclosing he had herpes.