Join Jon Bon Jovi for some rosé and music this Friday 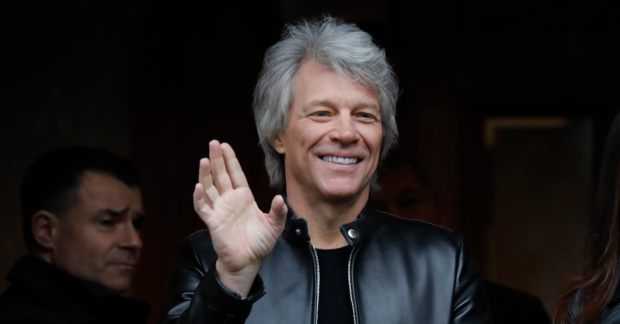 Jon Bon Jovi gestures as he waits for the arrival of Prince Harry at Abbey Road Studios in London on Feb. 28, 2020. Image: AFP/Tolga Akmen

Jon Bon Jovi, who was recently seen lip-syncing the Bon Jovi classic “Livin’ On A Prayer” to his wine bottles on TikTok, is inviting you to an evening of music and wine with him — virtually.

The event begins at 6:30 p.m. Eastern Standard Time with a pre-show “virtual happy hour” and wine tasting hosted by Live Nation. Fans can submit questions for the singer and his son Jesse Bongiovi, co-owner of Hampton Water, on the brand’s Facebook page ahead of time.

After the tasting and Q&A session, Bon Jovi will kick off an acoustic concert at 7 p.m. EST, featuring a live performance from the Kings of Suburbia.

If you want to sample the musician’s summery rosé along with him, bottles of Hampton Water ($19.99) can be purchased via the Hampton Water website or Wine.com (shipping within the United States only). $1 from every purchase will be donated to chef José Andres’ World Central Kitchen, which is helping to feed communities in need during the coronavirus pandemic.

Inspired by the father and son duo’s memories of sipping rosé poolside in the Hamptons, the wine was originally called Diving into Hampton Water; its name has since been shortened to Hampton Water. Created in collaboration with French winemaker Gerard Bertrand, it’s made primarily from Grenache grapes, blended with Cinsault, Mourvèdre and Syrah. Aged in oak barrels for up to two months, it describes itself as “fresh and lively.” The inaugural 2017 vintage appeared in Wine Spectator’s coveted Top 100 ranking in 2018 at number 83. RGA

Singer Jon Bon Jovi asks kindergartners to ‘Do What You Can’