MANILA, Philippines — Dismayed and angered over alleged widespread anomalies within the Philippine Health Insurance Corporation (PhilHealth), Angel Locsin on Tuesday made known her preference for long-term prison sentences — without the possibility of parole — for corrupt officials who “have no heart.” 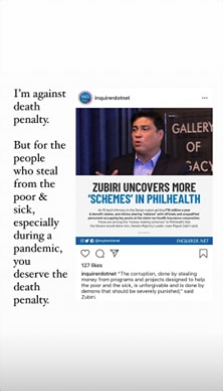 Among the schemes uncovered by Zubiri include an 18-bed infirmary in the Davao region getting P10 million a year in benefit claims, as well as clinics sharing “rebates” with PhilHealth officials.

Locsin admitted that while she is against the death penalty, she said that people who “steal from the poor and sickly” deserve to be sentenced with capital punishment.

“I’m against death penalty,” Locsin said, “but for the people who steal from the poor and sick, especially during a pandemic, you deserve the death penalty.” 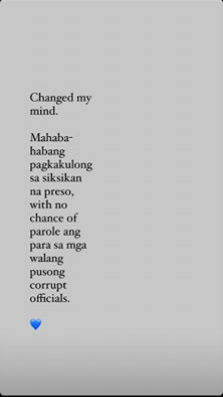 But in another Instagram Story entry, Locsin took a U-turn in her stance.

Calls for the revival of capital punishment in the Philippines were reignited with President Rodrigo Duterte making another push for it during his fifth State of the Nation Address.

The Philippines abolished death penalty in June 2006 when former when then President Gloria Macapagal-Arroyo signed Republic Act No. 9346, also known as An Act Prohibiting the Imposition of the Death Penalty in the Philippines.