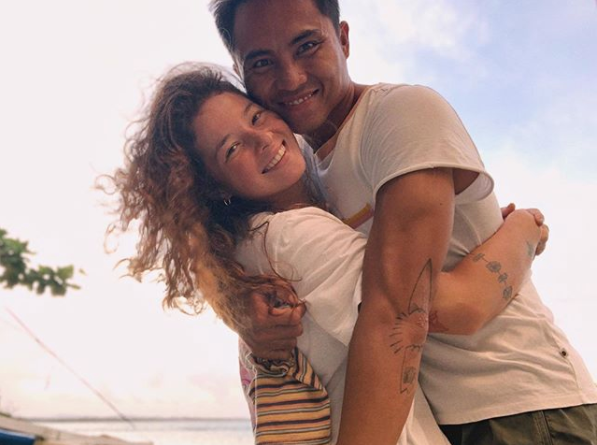 And Eigenmann defended her partner Philmar Alipayo from people who bash him for his brown skin and for living in a province.

The couple addressed the criticism he faced during a vlog post on their joint YouTube page Happy Islanders on Wednesday, Aug. 5. The video showed them answering their fans’ questions about their relationship.

As they responded to questions, one supporter asked Alipayo about how he adjusted to having a celebrity as a partner. The professional surfer admitted it was hard at first since people would say negative things about him.

While Alipayo did not immediately explain what he was criticized for, Eigenmann said that people would pick on him because of his skin color.

(Yeah, why do Filipinos think that that the way Filipinos look is ugly?)

She then stressed that having brown skin is great and assured Alipayo that he has nice skin. Meanwhile, Alipayo stated that nobody is ugly and that there are only people with ugly attitudes.

“I didn’t expect that because of me, people would be saying bad or negative things to Philmar just because of his skin color, and also because he’s from the province,” Eigenmann added.

She also hopes that Filipinos would get rid of the mentality that one is not successful just because they came from the province. Eigenmann noted that living in the province does not make anyone inferior to those who look for jobs in the city.

They then stated that they choose to stay on Siargao island because they love their life there.

“But it’s OK because while people are being mean, we’re happy,” Eigenmann said with a laugh. “We’re living our happiest, awesomest life.”

Aside from facing criticism, Eigenmann revealed that people used to tell Alipayo they were not good together since he was from the island.

Eigenmann then told Alipayo not to belittle being born and raised on an island since she considers island people lucky to be able to live in “paradise.” She also expressed how glad she is to currently live on an island herself.

Eigenmann moved to Siargao in 2018 and shares a 1-year-old daughter named Lilo with Alipayo. They each have kids from previous relationships. NVG

‘Every body is different’: Andi Eigenmann on losing postpartum weight

‘Grateful for the life I have’: Andi Eigenmann marks anniversary with Philmar Alipayo