Stars join Skyathon to help clean up one of the country’s top destinations
By: Armin Adina - Reporter
Philippine Daily Inquirer / 11:06 PM May 01, 2012 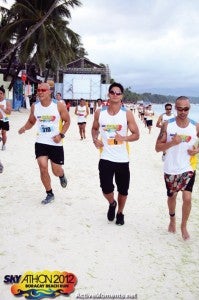 ROVILSON Fernandez, Daniel Matsunaga and Will Devaughn lead the pack at the start of their event.Activemoments.net

Stars displayed an exemplary level of athleticism at the recent Skyathon 2012 on Boracay. Three celebrities figured among top finishers in the foot races held along the famous coastline in Aklan.

TV host Rovilson Fernandez beat 64 others in the men’s 10-kilometer division and placed 10th, clocking in at 55:09.45. Actor and race car driver Mateo Guidicelli was 8th in the men’s 5-km race, finishing in less than 23 minutes, faster than 69 participants.

Sexy actress and former “Survivor” castaway Aubrey Miles surprised spectators with her swift strides; she finished 9th in the women’s 5-km division at 37 minutes, beating 53 others.

Other stars in the event, now on its third year, included: Miles’ partner Troy Montero, Brazilian-Japanese model Daniel Matsunaga and actor Will Devaughn. The three hunks ran in the 5-km race and all clocked in at under 30 minutes.

Sky Cable has organized Skyathon for the last three years. These are the only foot races held on Boracay to raise funds for the clean-up of one of the country’s top tourist destinations. The aim of the event is to spread awareness of the importance of preserving one of the best beaches in the world.

This year, 253 individual runners and 12 pairs (for the couples relay) joined the races.

Guidicelli participated as spokesperson for the direct-selling company Boardwalk, one of the sponsors. The Inquirer was a media partner this year.

Unlike the last two years, visitors from Manila trounced the locals this time around.

Skyathon 2012 culminated in “Gold Rush,” a gold-themed party at the Juice bar in Station 2 to fete the podium finishers and participants. The celebrity runners gamely joined tourists in the evening’s activities.