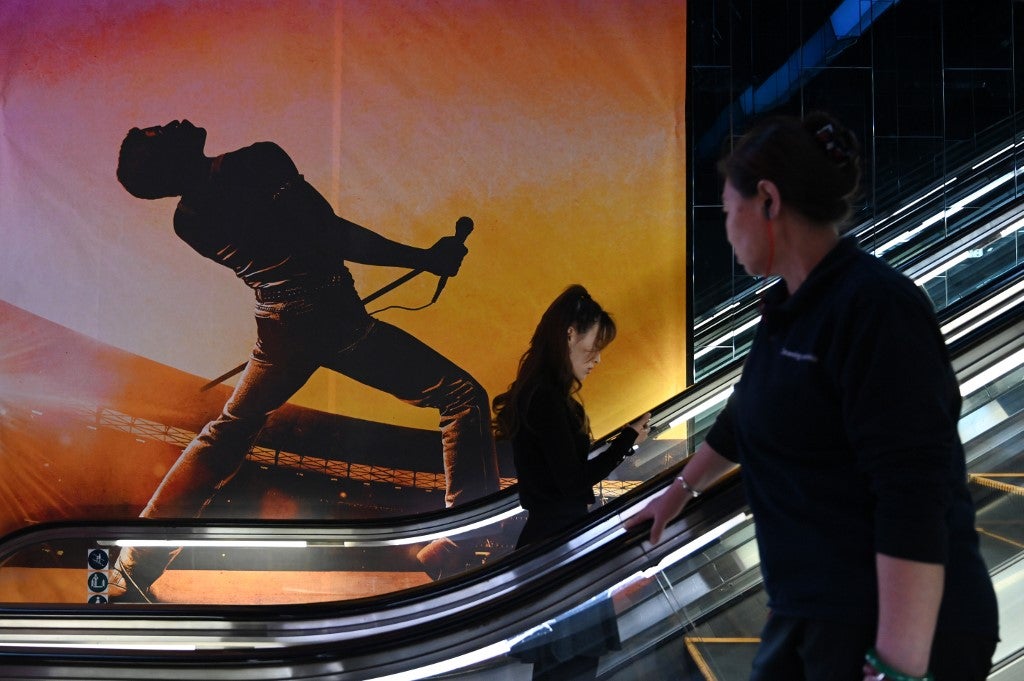 FILE — People ride an escalator past a poster for the film Bohemian Rhapsody at a movie theater in Beijing on March 27, 2019. Scenes in the movie about rock band Queen have been censored in China to remove references about lead singer Freddie Mercury’s sexuality. (Photo by GREG BAKER / AFP)

The lure of the massive Chinese market has led Hollywood to readily self-censor its films to please Beijing, according to a new report by Pen America, an anti-censorship group.

Screenwriters, producers and directors in the huge US film industry are changing scripts, deleting scenes and altering other content, afraid of offending Chinese censors who control the gateway to the country’s 1.4 billion consumers, according to the report released Wednesday.

The actions include everything from deleting the Taiwanese flag from Tom Cruise’s bomber jacket in the upcoming “Top Gun: Maverick,” to removing China as the source of a zombie virus in 2013’s “World War Z.”

Faced with blacklisting and other punitive measures, Hollywood producers are even censoring films not targeting the Chinese market, in order to not impact others planned for Chinese theaters, Pen America says.

“Steadily, a new set of mores has taken hold in Hollywood, one in which appeasing Chinese government investors and gatekeepers has simply become a way of doing business,” the report said.

Pen is a global organization which speaks out for the protection of freedom of expression for writers and artists worldwide.

It says Beijing enforces one of the world’s most restrictive censorship systems, and numerous members of the group’s China arm have been jailed, including Nobel Peace Prize laureate Liu Xiaobo, who died in 2017 while serving an 11 year prison sentence.

Censorship is now centralized under the Chinese Communist Party’s Central Propaganda Department, which decides whether a foreign film gets access to what is soon to be the world’s largest movie market.

Only a handful of foreign films are released in China each year.

The market’s importance is clear. Hollywood films like “Avengers: Endgame” and “Spider-Man: Far from Home” made more money in China than in the United States.

“The Chinese Communist Party, in fact, holds major sway over whether a Hollywood movie will be profitable or not — and studio executives know it,” the report said.

That explained why former Disney chief executive Michael Eisner apologized to Beijing after it banned the 1997 film “Kundun” about the Tibetan Dalai Lama, the report said.

And Richard Gere — star of the 1997 thriller “Red Corner,” which depicted a corrupt Chinese justice system, and a vocal advocate for human rights in Tibet — has said Hollywood producers avoid him so as to not provoke Beijing.

Increasingly, the report said, Hollywood people “voluntarily internalize these strictures, even without being asked.” Some even invite Chinese censors onto film sets.

One Hollywood producer told Pen: “If you come up with a project that is actively critical,” the fear is that “you or your company will actively be blacklisted, and they will interfere with your current or future project.”

Pen warned that acquiescence to Chinese censorship could become “a new normal” in countries proud of their free speech protections.

“Hollywood’s approach to acceding to Chinese dictates is setting a standard for the rest of the world,” it warned.