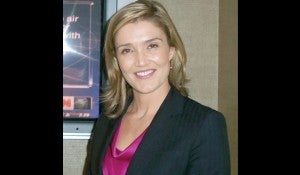 “The Philippines is a very digital nation,” said Hong Kong-based CNN anchor and correspondent Anna Coren during a recent interview at the Shangri-La Makati.

She elaborated on ways that the network continues to stay competitive and accessible via a variety of platforms, and how Filipinos can get the latest news from the media outlet.

“People here are tech-savvy and social media-savvy,” she said. “CNN is very interactive. We have the official website (cnn.com). We have iReport, which is big now in “Eye On” coverage. We invite people in the Philippines and people who have traveled to the country to send in their stories. And people here can follow us on Twitter.”

Coren is in the country for CNN’s weeklong “Eye On the Philippines,” focusing on different aspects of Filipino life and culture. The live reports started Monday; several portions and interviews are airing this week.

Previously involved in “Eye On Thailand” and “Eye On Mongolia,” Coren is intrigued by Asia’s radically different cultures. “[‘Eye On,’] offers viewers an in-depth look at a country and its people.”

Coren enthused that people had been generally cooperative during her “Eye On” visits. She described Filipinos as “hospitable and warm,” and the country as a “place [with] so much potential.”

“There’s foreign investment coming in, which is why the world is taking notice of the Philippines. That’s also why CNN is focusing on your country,” Coren said.

Coren started as a reporter and presenter in Australia, and has been with CNN since 2008. “I certainly have an affinity with this region,” she revealed. “Coming to CNN is certainly stepping up. It’s a global news organization, so that’s where my interest lies, and I feel very much at home at CNN. Asia is important; it’s becoming a place that the rest of the world is watching.”

Last week, Coren interviewed President Aquino for “Talk Asia,” airing on Friday. “He was very open and generous with his time,” she said. “He went through a range of subjects—the economy, corruption, poverty, contraception, his family. We covered it all. We certainly grilled him on certain points!”

According to the anchor, “Eye On” coverage’s and reports are seen in about 280 million households. A 10-member CNN team is currently in the country, covering different stories.

“Our focus is on business, the economy, politics, culture, the whole gamut. One of the stories is, ‘It’s more fun in the Philippines.’ That’s a great government initiative. Another is the fact that the Philippines has become the call center capital of the world. And my colleague Andrew Stevens interviewed the Zobel de Ayala brothers.”

Coren noted that her visits across Asia have exposed her to disparate people with universal desires: “At the end of the day, everyone’s pretty much the same. They want the same things—a roof over your head, better quality of life.”

Live reports air daily until May 4 (7 a.m.) on “World Report.” “Eye On The Philippines” airs