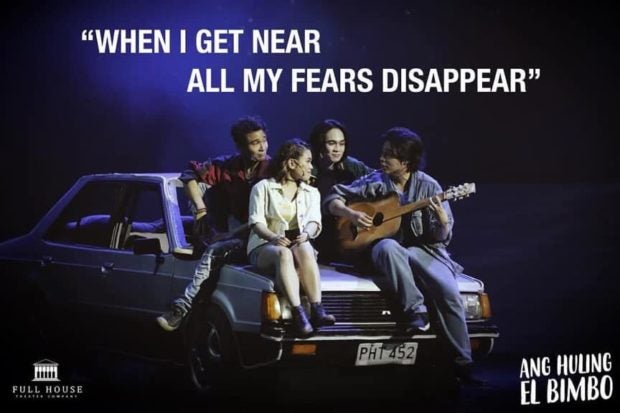 The cast of “Ang Huling El Bimbo” the musical in its 2019 staging (Image: Facebook/aheb2019run)

Eraserheads’ Ely Buendia and Myke Salomon expressed their disappointment after a performance that won an online talent show appeared to have taken more than just inspiration from the musical “Ang Huling El Bimbo.”

The production in question was that of CJ Villavicencio, who performed an Eraserheads medley for online reality talent competition “Pop Stage,” which is sponsored by fastfood chain Popeyes.

The show, hosted by Matteo Guidicelli, announced Villavicencio as the winner on Sunday, Aug. 2, earning him P1 million in cash and a one-year contract with Viva Artists Agency.

However, Villavicencio’s win has been met with backlash. Videos comparing his production and that of the musical have been posted on Facebook by theater actor Stephen Viñas and composer and dancer Jef Flores.

Buendia shared Flores’s post yesterday, which broke down the play’s version of “Pare Ko” and how Villavicencio allegedly imitated it.

“AHEB’S ROTC Pare Ko was by far, among all the brilliant arrangements and choreography in the show, the most striking and original renditions I had witnessed and enjoyed during its original run, and easily became my favorite,” the musician said.

“It took something old and was INSPIRED to make it NEW and FRESH. Therein lies the difference. Which is why it is disheartening that there is still a culture out there, not just in entertainment, that somehow makes it okay to take credit, and be rewarded, for someone else’s work,” he stressed.

“I am disappointed for all the AHEB crew because I know for a fact that they poured all their hearts and souls into creating something that was true to the material and their craft,” he noted, adding, “I hope this matter is resolved soon and credit is given to those who deserve it.”

“A guy copied/ripped-off our musical arrangements for #AngHulingElbimboMusical (musical treatment, concept) without permission won in that pop stage contest for his final round. He won 1million and an artist contract. I feel bad for the other contestants,” he said.

“And para sa mga productions and judges. You are judging concept and originality.. You tolerate ripping off.”

And para sa mga productions and judges. You are judging concept and originality.. You tolerate ripping off.

“Pop Stage” and Villavicencio have yet to make a statement on the matter.

Meanwhile, Misalucha responded to a Twitter user who claimed that Villavicencio plagiarized another person’s work.

Thank you for your comment. Yes the team is doing something about it.

She said, “Thank you for your comment. Yes the team is doing something about it.”  /ra