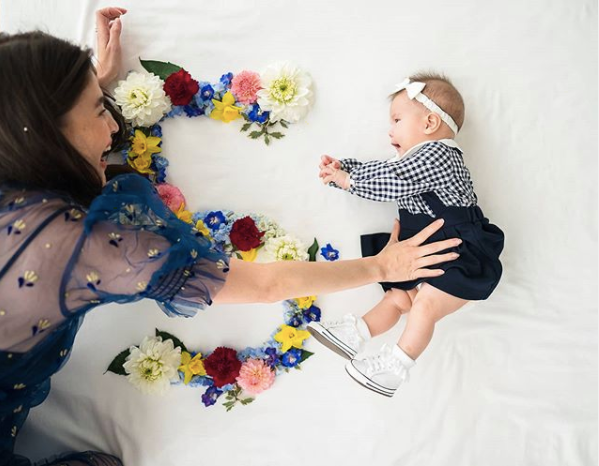 Like other proud parents, Anne Curtis and Erwan Heussaff have been documenting their firstborn child’s growth every month.

As baby Dahlia grows, however, the couple has been experiencing an increasing degree of “struggle” to keep their baby still while they are capturing her photos.

“Soon after this picture was taken, she kicked off her shoes AND SOCKS and then kicked the flower arrangement I took an hour putting together,” the mom said on her Instagram post on the same day.

The baby was leaning sideways with her arms stretched to the direction of the number 5 flower arrangement, which was next to her. Dahlia was apparently looking and reaching for her mom while they were trying to take her photos, according to Curtis.

The doting mom then explained how her newborn keeps her happy amid the COVID-19 crisis.

“I’m so thankful to have her and all her kulitness (antics) to brighten my days when they get gloomy,” she said. “Love her to bits and pieces.”

Too cool for school. Naka de kwatro pa. 😂 Happy 5th month to our little daahling, Dahlia Amélie. 🌸 It’s so hard to take a picture of her na. Ang likot likot. 😂 Soon after this picture was taken, she kicked off her shoes AND SOCKS and then kicked the flower arrangement I took an hour putting together. Kulit kulit little girl. 🙈 I’m so thankful to have her and all her kulitness to brighten my days when they get gloomy ☀️ Love her to bits and pieces. Hope this helped make your Sunday a little sweeter 💖 P.S – look at @erwan’s post to see who she’s looking at and reaching for 😋 📸: Papa @erwan Styling, Set and Art Design + Hype girl : Mum

Heussaff also showed the wacky behind-the-scenes of their photoshoot. Curtis laughed while trying to guide Dahlia away from the flower arrangement, as seen on her husband’s Instagram page on Aug. 2.

“It was really easy to take pictures of her for the first 4 months,” Heussaff said. “Now, Dahlia has her own ideas on how these photoshoots should go.”

It was really easy to take pictures of her for the first 4 months. Now, Dahlia has her own ideas on how these photoshoots should go. 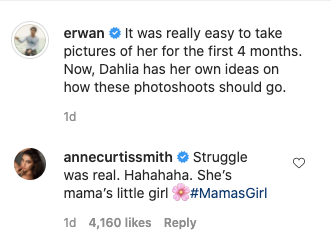 The couple tied the knot in New Zealand in 2017. The actress gave birth to Dahlia Amélie on March 2 in Australia. On their second wedding anniversary, Heussaff joked that he hopes their children will inherit Curtis’ stunning looks, but that they get his voice. JB