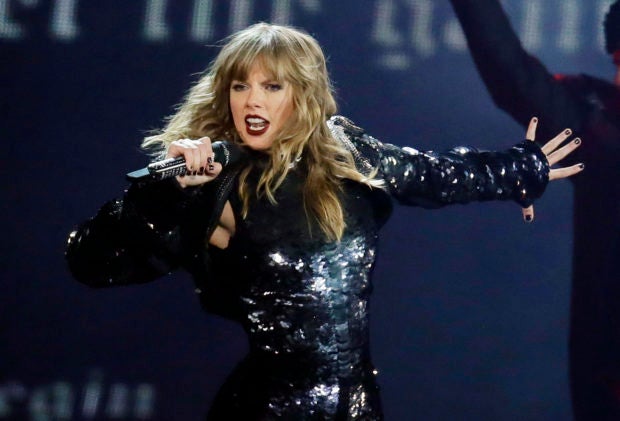 Taylor Swift’s soothingly folksy eighth studio album “Folklore” proves you can be productive even in isolation.

In fact, as it turns out, it ranks up there with 2014’s “1989,” 2012’s “Red” and 2010’s “Speak Now,” with music lovers heaping unanimous praise on the recording for its cohesive return-to-basics sound and the pertinent themes it tackles—from doomed love affairs (“Hoax,” “Exile,” “Illicit Affairs”) and the downside of stardom (“Mad Woman”) to the sorry state of a world held hostage by a pandemic (“Epiphany”).

The surprise 16-track collection, announced to the singer’s 137-million Instagram followers barely 16 hours before its release, has since broken a Guinness-certified record on Spotify (biggest opening day for an album by a female artist) en route to becoming the biggest debut week so far by any music artist in 2020—with good reason.

For example, even as the 30-year-old songstress sings once more about heartbreak and infidelity—familiar themes cleverly parlayed into Billboard-charting gold in her previous hits—the album is no longer as hell-bent on justifying vengeful bitterness or pulling the victim card or playing the blame game.

“Folklore” is also about evincing growth and maturity, particularly in tracks where Taylor holds herself accountable for her own misdeeds, as she does in “This Is Me Trying” (“My words [are] shoot to kill when I’m mad/ I have a lot of regrets about that”) and “Peace” (“Our coming-of-age has come and gone/ Suddenly this summer, it’s clear”).

As she explains on Instagram, it’s a “brand-new album of songs I’ve poured all of my whims, dreams, fears and musings into,” and recorded with her collaborators “in isolation.” The result: A collection of 16 tunes (the deluxe edition includes a bonus track called “The Lakes”) that is as musically whimsical as it is thematically significant.

Musing on the album’s unexpected release during the global health crisis, Taylor explains, “Before this year, I probably would’ve overthought when to release this music at the ‘perfect’ time, but the times we’re living in keep reminding me that nothing is guaranteed. My gut is telling me that if you make something you love, you should just put it out into the world. That’s the side of uncertainty I can get on board with.”

With vividly expressive lyrics book-ended by the dark melancholy of the last two songs she wrote for the album (“The 1,” “Hoax”), which liken her failed romances to “the greatest films of all time [that] were never made,” the playlist likewise gets its reality check from the emotional abuses she oftentimes fell victim to: Your faithless love’s the only hoax I believe in/ Don’t want no other shade of blue but you/ No other sadness in the world would do.

And just when you think she’ll succumb to all the hype of superstardom, Taylor manages to turn everything around and puts an image-tweaking spin on things—as she brilliantly did so in her bold and daring Netflix documentary, “Miss Americana” (which has a 91 percent fresh rating on Rotten Tomatoes). 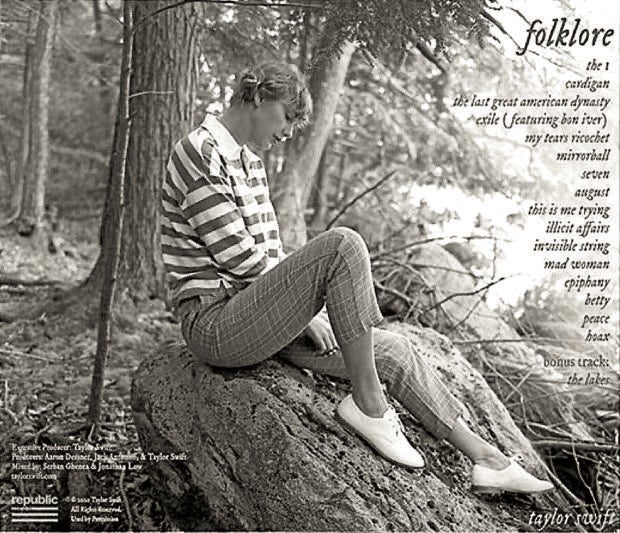 Proof in support of this observation comes in the form of what Taylor’s fans refer to as the inventively imagined “Teenage Love Triangle,” with Taylor singing from the different perspectives of people who are dragged into a romantic triangle: “Cardigan” focuses on the point of view of a girl, named Betty, who falls in love with a cheater named James (“When you’re young, they assume you know nothing”).

Meanwhile, “August” is sung from the perspective of the girl James cheated on Betty with (“So much for summer love and saying ‘us’/ ‘Cause you weren’t mine to lose”); and “Betty” examines the 17-year-old confused Lothario who refuses to own up to his mistakes following what transpires in “August” (“Would you have me?/ Would you want me?/ Would you tell me to go f**k myself?”).

The task and excitement of putting two and two together, then stringing interrelated situations are part of the lure of Taylor’s music. While some songs tell stand-alone tales, a good number of them play out as pieces of a compelling narrative puzzle completing a bigger picture.

Even better, listeners are free to interpret her songs as they please. And it doesn’t hurt that the dazzling combo of prose, poetry and wordplay framed by catchy hooks make for veritable earworms that are satisfying and hum-worthy as all get-out.

Moreover, Taylor refuses to rest on her laurels by discussing issues—existential (“Mirrorball”), personal (“My Tears Ricochet”) or nostalgia-driven (“Seven”)—that resonate with her. Case in point: The story of art patron Rebekah Harkness brought to insightful life by “The Last Great American Dynasty’s” oddly soothing patter.

In “Illicit Affairs,” Taylor displays her maturing views about jealousy and infidelity, by putting her pain in perspective: That’s the thing about illicit affairs/ And clandestine meetings and longing stares/ It’s born from just one single glance/ But it dies and it dies and it dies/ A million little times/ Don’t call me “kid,” don’t call me “baby”/ Look at this godforsaken mess that you made me/ You showed me colors you know I can’t see with anyone else.

There’s also a tinge of jealousy and regret as she imagines a tantalizing situation in “Exile”—about ex-lovers crossing paths again and seeing some sparks still flying—made even more alluring by her complementary partnership with Justin Vernon of the indie folk band Bon Iver.

It’s easy to imagine what takes place during the former couple’s unexpected meeting in the way Taylor and Justin express themselves: I can see you staring, honey/ Like he’s just your understudy/ Like you’d get your knuckles bloody for me/ Second, third and hundredth chances/ Balancing on breaking branches/ Those eyes add insult to injury.

Yes, her stories often revisit the pain of past heartbreaks. But in “Invisible Strings,” Taylor thinks there could be serendipitous reasons for her to have hurdled each of them: That the romantic failures that inspired her hitmaking musical confessionals led her to her current squeeze Joe Alwyn, the dashing 29-year-old British actor who is making her “strings ringing” and her “heart puttering.” INQ