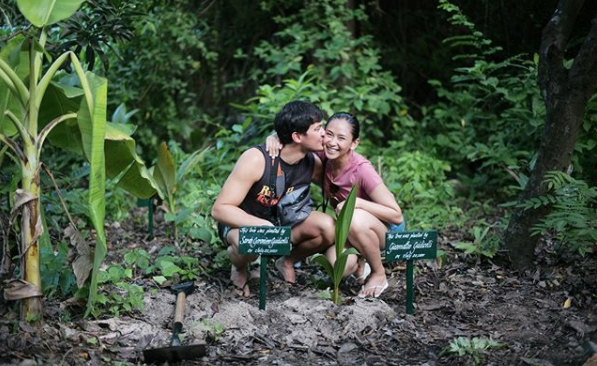 Matteo Guidicelli (left) plants a kiss on his wife Sarah Geronimo’s cheek in a light moment captured during their recent trip to the Amanpulo Resort in Palawan./INSTAGRAM PHOTO

“There were adjustments that I had to make because I already have a husband,” continued the “Popstar Royalty” at a virtual launching event.

The couple, who surprised the nation when they tied the knot in a service done in secret in February, spent the singer’s 32nd birthday planting coconut trees at the Amanpulo resort in Palawan on July 25, as seen in a series of photographs shared by celebrity dermatologist Vicki Belo on Instagram.

Geronimo admitted making Guidicelli’s health her priority, because “I have to give importance to the health of the people around me.”

She said she always has to make sure she is healthy and protected because somebody is waiting for her to come home.

The singer-actress still regularly appears on the weekly musical-variety show “Asap Natin ‘To” on the embattled Kapamilya channel, ABS-CBN.

With the COVID-19 pandemic still not letting up in the country, Geronimo considers every day as a gift that she has to be thankful for considering that “tomorrow is not promised.”

She said: “I am thanking God for the life He has given me, as well as my loved ones. I draw inspiration from that.”

Geronimo also considers her work as a “grace” from the heavens in times like this.

“So many people have lost their jobs. That is why I value all the opportunities that are still coming my way. Not a lot of people are given that,” she shared.

During the launch, Geronimo was also asked which between sleep or exercise she values more and the singer-actress chose exercise.

She was likewise asked what song of hers she would dedicate to her new life as a married woman, she quipped: “Forever’s Not Enough!”