WATCH: Emotional LJ Reyes reacts to ‘Through Night and Day’ with Paolo Contis 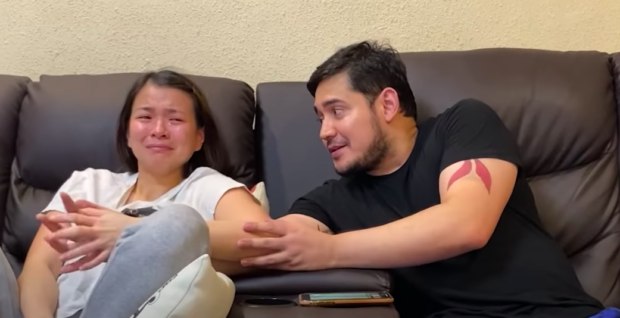 LJ Reyes (left) cries as he watches “Through Night and Day” with her boyfriend, Paolo Contis. Image: screengrab from YouTube/Paolo Contis

Just like everyone else, LJ Reyes could not help but sob while watching the hit tear-jerking film “Through Night and Day,” where her boyfriend Paolo Contis stars in.

Contis showed through his YouTube vlog on July 26 his partner’s emotional reaction to the 2018 film, which recently regained popularity and topped Netflix’s charts.

(Today’s episode is quite special because this will serve as my way of showing gratitude to those who watched my movies on Netflix: “Pangarap Kong Holdap” and “Through Night and Day.” So, this episode is for you guys.”

The playful couple can be seen joking around throughout the 12-minute vlog, but only until they reached the latter part of the movie.

At one point, Contis teased his girlfriend, who looked like she was about to cry, that it was still too early in the film to let the tears out. A few minutes into the video, however, the actor himself began to look emotional as he watched his own film.

As a drama scene in “Through Night and Day” became too tense, however, so did Reyes’ reaction as tears began flowing down her face while holding hands with her boyfriend.

With just 12 minutes left in the film, Contis stopped the stream as he grew worried for his girlfriend, who by then could not stop sobbing in front of the camera.

“‘Di ko natapos (I did not finish it),” Reyes stressed as she continued crying.

Contis then ended the vlog by thanking fans for watching “Through Night and Day” and “Pangarap Kong Holdap,” in which he both starred. Both films recently held the top two spots on Netflix Philippines’ most popular movies list.  /ra