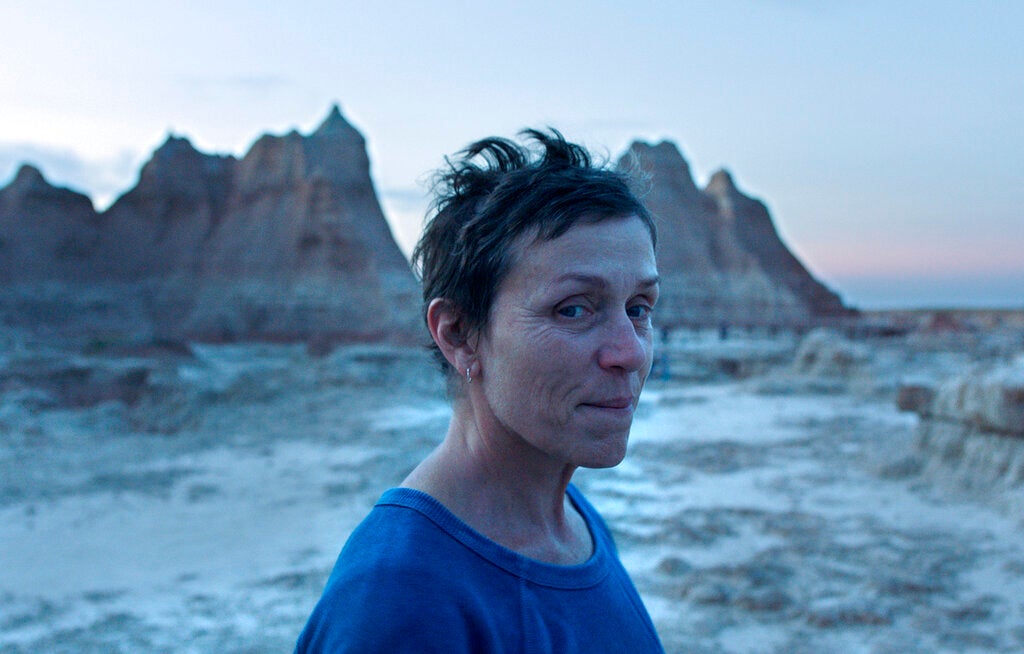 Frances McDormand in a scene from the film “Nomadland.” (Searchlight Pictures via AP)

“Nomadland,” Zhao’s follow-up to her acclaimed 2018 film “The Rider,” is the first movie announced in the new partnership that has brought together the fall’s biggest movie launch pads, which typically compete against each other for world premiere rights.

Toronto and New York are prepping primarily virtual editions. Telluride was forced to cancel entirely, but it will carry on in drive-in screenings in Los Angeles.

“Nomadland” will debut across Venice, Toronto and at “Telluride from Los Angeles” on Sept. 11. New York, which named the film its centerpiece, will premiere Zhao’s film on a later date.

Adapted from Jessica Bruder’s non-fiction book “Nomadland: Surviving America in the Twenty-First Century,” the film is about a woman, Fern, who after her Nevada business collapses, joins with other older American workers laid off in the Great Recession to travel the country in campers.

“The American road fascinates me,” said Zhao. “It’s heartbreakingly beautiful and deeply complicated. I’ve traveled it for many years and always hoped to capture a glimpse of it. I’m thankful to be able to make ‘Nomadland’ and excited for audiences to join Fern on her adventure.”

Fox Searchlight is planning to release “Nomadland” theatrically in the fall.

“It is a film that acquires particular meaning in a moment of pandemic induced seclusion, proving that values like mutual support and a strong sense of community can save us from solitude, failure, and despair,” said Alberto Barbera, director of the Venice International Film Festival. ”I am also happy to share the opportunity to support this beautiful film with our fellow festivals of Telluride, Toronto, and New York: a concrete sign of solidarity and collaboration in this unprecedented and difficult time.”