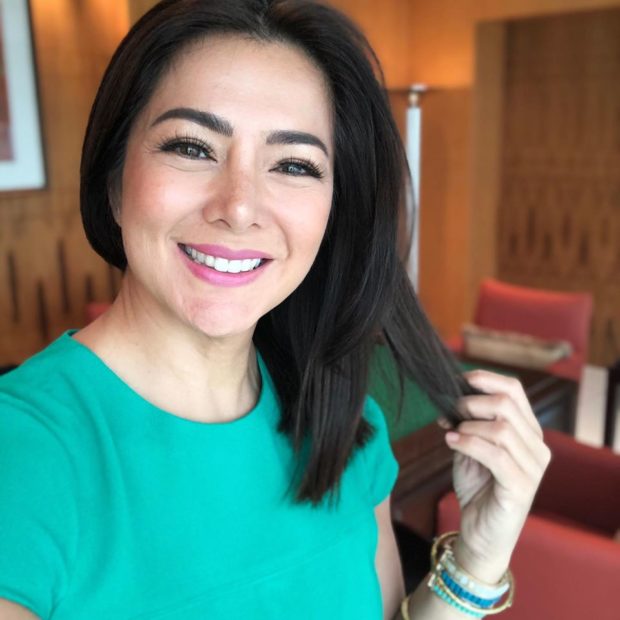 Alice Dixson finally broke her silence on an urban legend that involves her, a mall and a half-snake, that has been in the rumor mill for decades.

The actress aired her side in a vlog on YouTube yesterday, July 25, where she stressed, “Nothing really happened.”

According to the myth, a “taong ahas” (snake man) lives in Robinsons Galleria and that he is the twin of Gokongwei scion Robina. Dixson was allegedly in a fitting room of Robinsons Galleria when the floor opened up and she fell into a trap with the snake creature.

The story has since had several mutations, but according to Dixson, “Nothing really happened in the way the urban legend or the myth dictates.”

(I did not fall into a trap door. I did not escape though a corridor going to a hotel.)

(I was not paid off P850 million and I was not cut off in a TV show when I was trying to explain myself.)

“I made [a] promise to a dear friend — I said I would tell my side of the story this year at dahil [30-year] anniversary na (and because it is the 30-year anniversary already) this month, it is NOW time,” she wrote in the caption on YouTube.

Dixson confirmed that there was an instance in her younger years when she visited Robinsons Galleria. It was a movie night and she was asked to change her outfit, so she went to a restroom outside the department store on the fourth floor.

“Natatandaan ko nga may nag-uusyoso sa labas and for some reason, while I was inside the bathroom, I said, ‘Tuklaw! Tuklaw!’” she said.

(I remembered there were people watching outside and for some reason, while I was inside the bathroom, I said, “Snake bite! Snake bite!”)

“Now, I don’t really know kung bakit ko iyon ginawa. Siguro kasi, I was just being funny? I was trying to get a laugh sa mga kasamahan ko? I was being young and silly.”

(Now, I don’t really know why I did that. Maybe because I was just being funny? I was trying to get a laugh from my companions? I was being young and silly.”

(And also because at that time, Richard Gomez, who was with me in the movie “Dyesebel”, had a movie that came out called “Tuklaw” and that was in then.)

(A few days later, the news or gossip that I was bitten or eaten by a big snake inside the mall came out. This even came out in the headlines of tabloids and news.)

She said a representative from the mall reached out to her but she “dismissed it and went on with my business.”

However, her supposed run-in with the half-snake took a life of its own, such that her own Filipino-Chinese friends believed the Gokongweis had a snake offspring.

Dixson speculated that a mass communication course in one school could have spread the story.

She said the curriculum “had a particular project to disseminate information, to see how far, how convoluted, and how long information could spread. And I believe they used this story.”

The actress also surmises that her silence was a “contributing factor” in the rumor growing bigger.

She defended her choice to stay silent, saying that she would rather not comment on something false.

“I didn’t really feel the need to talk about it or defend myself. In fact, nakalimutan ko (I forgot it) until recently.”

Dixson said another theory on why the urban legend has gone on for so long is that there is supposedly truth to it. But she argued that if it were true, someone should have stepped forward about it.

She said that a few years ago, there were rumors that the snake man died in the mall. Shortly after, Robinsons Galleria reached out to her to participate in their digital ad campaign.

Read Next
‘Fly with you soon’: Steve Dailisan loses job as pilot due to COVID-19 pandemic
EDITORS' PICK
65% of Filipinos say Duterte’s health should be made public – SWS
Would the military allow me to stay this long if I’m inutile? – Duterte
DSWD chief admits ‘slow start’ in distribution of aid in ‘NCR Plus’
Pre-order the new vivo Y20s [G] to get a free TWS earphone
In good spirits: SMDC helps farmers and residents through Kadiwa Market
Smart three-peats as country’s fastest mobile network – Ookla
MOST READ
Vico Sotto frets getting photos of ‘butt vaccination’ from Pasig dwellers
Metro Manila to have shortened curfew hours from 8 p.m. to 5 a.m. under MECQ
San Miguel Corp. continues to invest heavily in the Philippines’ future
COVID-hit Roque slams ‘un-Christian’ query on how fast he secured hospital bed
Follow @NGunoINQ on Twitter
Don't miss out on the latest news and information.