LONDON — American actress Amber Heard testified Thursday she loved ex-husband Johnny Depp and was rooting for him to kick his drug habit before filing for divorce because of alleged domestic abuse. 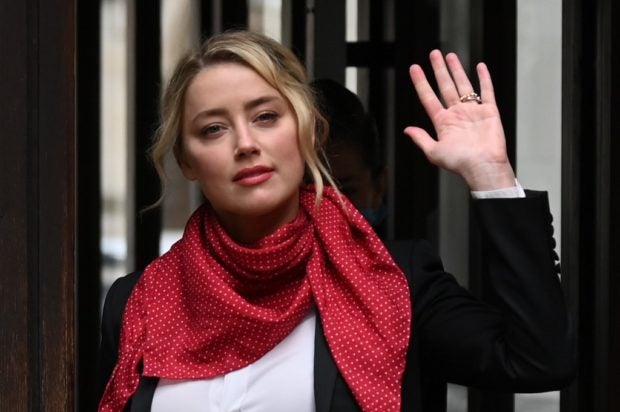 US actress Amber Heard arrives at the High Court for the libel trial by her former husband US actor Johnny Depp against News Group Newspapers (NGN) in London, on July 24, 2020. Depp is suing the publishers of The Sun and the author of the article for the claims that called him a “wife-beater” in April 2018. Photo by DANIEL LEAL-OLIVAS / AFP

Depp is suing the publisher and executive editor of The Sun tabloid in London’s High Court over a 2018 story accusing him of beating his 34-year old former wife.

The star-studded trial is due to conclude after three weeks of sometimes shocking revelations and allegations next Tuesday.

The Sun says it can back up its claim with 14 examples of Depp’s alleged violent behaviour in the three years preceding Heard’s 2016 decision to file for divorce.

Heard said on her fourth and final day of testimony that the two “had had a wonderful year together where he was sober and clean and that is how I got to know him.”

“I loved him and I didn’t want to lose that. The other side of him was a monster, but I always held out hope that he would get clean and sober,” she said.

Depp kicked off the hearings by admitting that he would become a “monster” when going off on days-long binges that saw him mix cocaine with powerful prescription pain killers and various other drugs.

“The Pirates of the Caribbean” franchise hero tried to get treatment for his addiction on his private island in the Bahamas in 2015.

‘I didn’t want this’

Depp accuses Heard of being the aggressor in their altercations and staging photos of her alleged injuries for personal gain.

The Sun’s lawyer Sasha Wass asked Heard about Depp’s allegation that the actress was trying to “benefit financially” by accusing him of abuse.

“No,” Hear replied. “What woman has ever benefited from being the victim of domestic violence?”

Heard said she was “entitled to 50 percent” of her 57-year-old former husband’s assets “without having to prove anything happened in the marriage, bad or good.”

She concluded her testimony by saying she was speaking out now because “more and more attacks were coming out against me and accusing me of being a liar.”

“I didn’t want to put Johnny (in a position) where the world or his kids would know fully what he was or what he could do. It’s embarrassing.”

Friday’s hearing will include evidence from Heard’s sister Whitney.

The defence is due to rest its case on Monday and Depp’s team is expected to make a closing statement Tuesday.