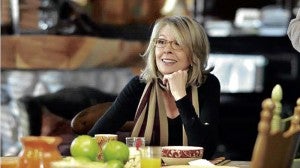 DIANE Keaton in “Darling Companion.” She says she had to make this movie.

LOS ANGELES – “Is that true?” Diane Keaton reacted when told that Francis Ford Coppola’s “The Godfather,” where she was one of the leads, marks its 40th anniversary this year. “Ay yay yay!” she exclaimed. “Wow. How is it holding up? Is it still good?”

Clad all in black, Diane sat down for a chat about her passions – rescuing dogs, restoring homes (but this time she said, she was building one from scratch), recording her friend Jack Nicholson’s stories for posterity, and the care of her two adopted kids, daughter Dexter and son Duke. And why she felt way different from her younger self.

In Lawrence Kasdan’s “Darling Companion,” Diane plays a woman who loves her dog more than her husband (Kevin Kline). Below are excerpts from our interview:

Was there something from the younger Diane Keaton that you felt you should have listened to as you got older?

No because the younger Diane was consumed by one thing only – career. I don’t think that would have taken me to any place that’s very good for my mental health. It was enough that I only thought about me. The younger Diane was scared and all she cared about really was, “Oh, who am I going to go out with” and “I really want to work hard in the movies. I want to be successful.” But now it has all expanded. You see that life isn’t just that.

You and Jack Nicholson were wonderful together in “Something’s Gotta Give.” Do you stay in touch? 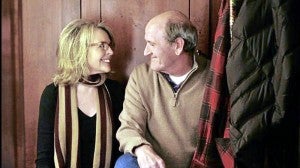 I do. We’re friends. I love Jack. He’s a generous guy. He’s a great actor and human being. I tried to get Jack to allow me to bring a tape recorder and just tape his talk. I feel like he’s a master storyteller. All you have to do is just sit there and record him. If you had a year of recording Jack’s storytelling, you would have an amazing book. It would be astonishing.

But Jack is smart. He’s not going to have me sit around there. He doesn’t want that. The reason I bring it up is because to be with Jack is an education in a great character. There’s nobody like him in the world. Absolutely nobody. And then he’s such a great actor as well. He’s one of a kind. He’s the greatest of all.

What was your quirkiest investment move?

I’m compulsive about real estate. Sometimes it’s been good.  But as we all know, sometimes it’s also been bad. Real estate is my obsession. I’m not interested in anything but real estate. I love homes. I restore homes. I’m now building a home from the ground up. Those are my investments. That’s it. I’m not in the stock market. I have no interest in somebody’s restaurant (laughs). I just want to play it safe. I consider real estate the best.

Have you seen “Love and Death” recently? It’s one of your best performances. What do you remember about making that film?

It was a breeze. Every movie I made with Woody until and including “Annie Hall” was so easy. Nobody expected anything. We just went out there and made movies. After “Annie Hall” though, it became more important because it won the Oscar. Suddenly, you were riddled with, “Oh my God, now what? It’s got to be great. We all have to be so great.”

“Darling Companion” seems a perfect film for you.

It was perfect. I got this call about a movie with Larry (Lawrence Kasdan). It was about rescuing a dog. I thought, there’s no way I’m not doing this. This is like the history of my family. When my mother was a young girl, she wanted to take in stray cats and start a cat farm! 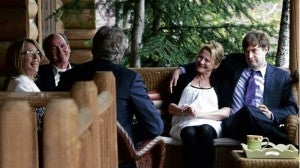 WITH Jenkins, Dianne Wiest (second from right) and other cast members in a scene

Can you talk about your pet dog?

I’m in love with my dog Emmie.  The love that I feel for Emmie and all the dogs that I’ve had in my life is unlike any other love that I’ve experienced. Talk about unconditional love. Dogs don’t talk back. They’re so comforting. This dog sleeps with me. I’m so enchanted by her. Human relationships are so complicated. It’s not complicated with a dog.

How does this love for a dog bring the leads closer to each other in the movie?

Something horrible happens with the dog. It forces us to address all the problems that our characters have in their marriage. It served as a catalyst to question why our marriage had arrived at an impasse.

Are your children as passionate about animals?

My daughter has two rats that she’s close to. The rats’ names are Ludicrous and Nala. They’re very smart. You must go out and get a rat for a pet.

What was it like to work with Kevin Kline?

Kevin was perfect in that part.  But in between takes, he was constantly correcting my grammar! And I would always defend my grammar!  We were a good match. It was good casting. Kevin is hilarious. He’s delightful. His sense of language is beautiful. He’s a good writer. I told him he should write a memoir. But does he listen to me? No.

Did you know Kevin socially before?

Not really. I met him a couple of times through Steve Martin, who’s a friend of mine.

What is the most important lesson you learned from your mother?

To shut my mouth and listen.

And now that you have a daughter …?

I listen to what she has to say!

From which period in your life did you learn a lot?

I was involved with a talking cure therapy. I really liked that. It really helped me. It expanded my thinking and that was very important. But that also came from my mother. I think sometimes you need to say things out loud in order to really own them. Because when  you just think and you’re by yourself, it becomes so fantasy-driven.

I learned a lot from my mother, from the things that she missed out on. She was an artist at heart. Yet she didn’t run in circles, and that allowed her to really learn more about art or to find a craft that would really give her an opportunity to do more with her life. I took advantage of that awareness and I thought to myself, I don’t want to be this or that.  I didn’t pursue a family until very late. It was really too late to have one, but I did it anyway.

Why was it too late?

Because I was 50 when I adopted Dexter. That’s old to be adopting. If you really think about it, it’s probably not the best idea. Because you don’t really have control over anything in life. I’m 66 now. I keep thinking, okay Diane, you have to make it. You have to work and try hard until you get to be 80. It’s not going to be perfectly easy for them. Duke is 11. I have to keep working and to keep being healthy.

What are your thoughts on plastic surgery?

I would never say anything positive or negative about plastic surgery. I think it can be wonderful for some people. If it makes someone feel better, good for them. But for me, I don’t know. It’s probably too late at this point anyway. I guess I can have a straightforward facelift. That would be possible. We’ll see. Next time I see you, I’ll be like this (makes a stiff, zombie-like facial expression).

Email the columnist at rvnepales_5585 @yahoo.com. Follow him at http://twitter.com/nepalesruben.