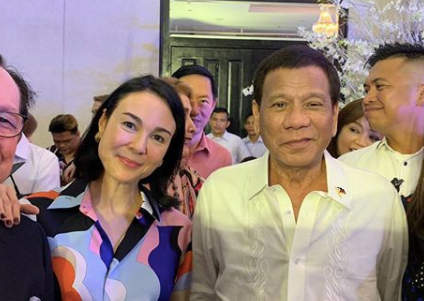 Actress Gretchen Barretto reaffirmed her allegiance to President Rodrigo Duterte and denied being the handler of a social media page that called for his removal in Malacañang.

“I AM PRO DUTERTE,” Barretto wrote in all caps in her Instagram page yesterday, July 10. The actress addressed her political leanings after a Twitter account with the handle @realgretchenb posted: “The hashtag is the tweet. #OustDuterteNow.”

FEATURED STORIES
ENTERTAINMENT
WATCH: Jane De Leon releases own ‘How You Like That’ dance cover
ENTERTAINMENT
K Brosas silences basher by reporting them to their employer
ENTERTAINMENT
Allan K draws flak for comment on suicide
View this post on Instagram

With regards to the media giant ABS-CBN’s denied franchise renewal, the Twitter page likewise made a statement commending the “11 brave congressmen who truly [represent] the people.” The page then proceeded to call other lawmakers “pigs” for voting yes to the technical working group’s (TWG) report recommending the denial of the TV network’s franchise application.

Barretto said on the same day that she has not made a single statement about the media company or the Congress.

Meanwhile, the head of ABS-CBN’s Integrated News and Current Affairs, Ging Reyes, said that the TV network’s shutdown “is an attempt to curtail press freedom.” The renewal of the network’s 25-year franchise was denied yesterday, July 10, after holding 12 hearings in Congress.

The media giant went off the air on May 5, in accordance with the National Telecommunications Commission’s (NTC) cease-and-desist order, a day after its franchise expired.

THIS IS A FAKE TWITTER ACCOUNT!!! I Have Not made a single statement regarding congress & abs cbn 👊👊👊

Barretto has also been open about having close ties with Duterte, as she greeted him on his 75th birthday on March 28.

Last October, the actress was accompanied by the President to the wake of her father, Miguel Barretto.

After Barretto disowned the Twitter page, the account changed its name to “Not The Real Greta, Way Better,” as of this writing.

“[Unlike] the Real Greta, [I am not pro-evil,]” the account said in its profile description. “(X mark) DDSh*t” 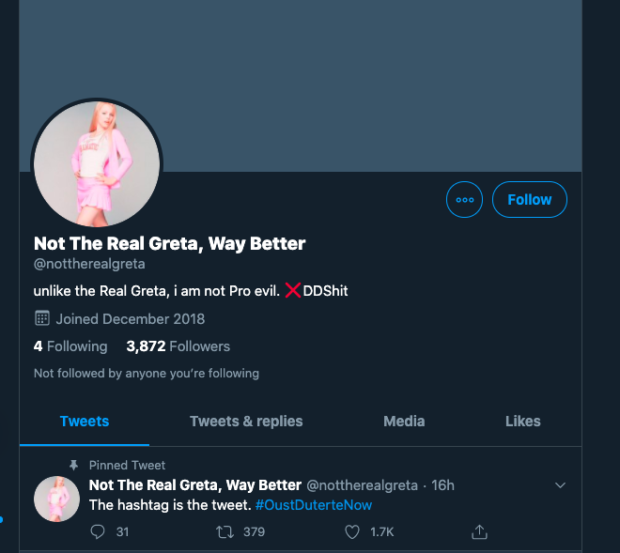 Aside from Barretto, some stars have likewise talked about their political leanings, namely Bela Padilla, who denied being a DDS, or Diehard Duterte Supporter, and Piolo Pascual, who said he does not “do politics.”  /ra

Piolo Pascual on Sagada trip: It had nothing to do with gov’t

Read Next
Jada and Will Smith address relationship in ‘Table Talk’
EDITORS' PICK
A gem of a residence in the new normal
PNP: Checkpoints back in MECQ areas
Water remains our saving grace right now
Been there, done that but what’s the difference between MECQ and GCQ?
BREAKING: 3,226 latest COVID-19 cases bring PH’s total to 106,330
Smart 5G goes live
MOST READ
MECQ guidelines in infographics
Want higher pay? Join the police force, Duterte tells nurses
Lacson takes up cudgels for health workers ‘threatened’ by Duterte
Duterte heeds frontliners’ plea, reimposes MECQ in Metro Manila, other areas Aug. 4 -18
Don't miss out on the latest news and information.