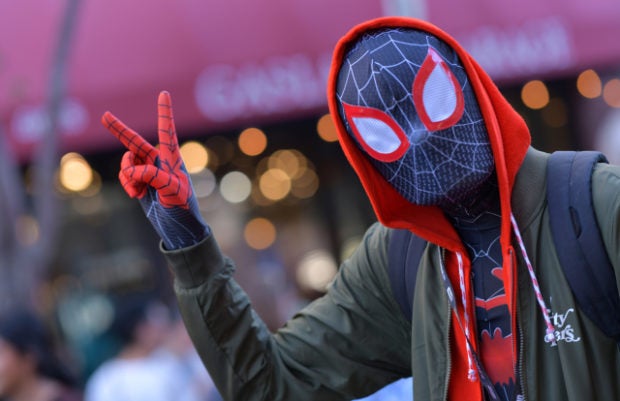 A cosplayer pays homage to “Spider-Man: Into the Spider-Verse” at the 2019 San Diego Comic-Con. Image: Chris Delmas/AFP

The San Diego Comic-Con might not be in San Diego this year, but that’s not stopping exhibitors from adding to the expo schedule.

[email protected] runs July 22- 26, and the Disney empire is present in multiple forms.

Streaming service Disney+ already revealed some of its plans, and Marvel, as one might expect, will be lending its weight to a July 23 exploration of “Marvel’s 616”, a documentary series about the Marvel Universe’s pop culture fandom.

Unlike its usual annual San Diego incarnations, the online [email protected] will be free of charge, with organizers to detail precise viewing arrangements in the lead up to the five-day event.

A first look at the show is being co-presented by directors Gillian Jacobs (actress in “Community”) and Paul Scheer (writer and actor in “The League”).

Interest in animated Spider-Man adventures is heightened thanks to the success of 2018 movie “Spider-Man: Into the Spider-Verse”, which has generated a 2022 sequel and a female-centric spinoff.

“Maximum Venom”, however, is the name of the third season of Disney XD’s current Spider-Man animated television series, currently halfway through a sequence of six monthly hour-long two-parters.

Marvel HQ participants can also expect not only a Lego battle and a comics read-along but also a draw-along too.

Rounding out Marvel’s schedule is a completely comics-centric panel on July 24 entitled Next Big Thing.

The event will feature chat from the folk behind crossover series “Empyre”, in particular September 2020’s X-Men issue “X of Swords”, as well as “Amazing Spider-Man” upcoming landmark 850th issue (also due September), and insights into the return of a classic Marvel character, the Werewolf by Night, earmarked for involvement in a mystery Marvel Cinematic Universe project. NVG