Heart, Chiz open up on concerns with anti-terror bill, coping with online hate 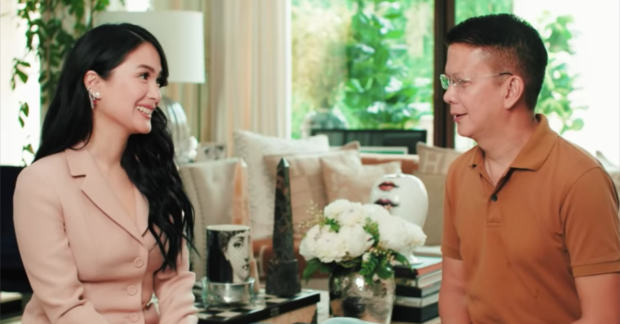 Heart Evangelista sought advice from husband Chiz Escudero about using one’s voice in the age of the internet as seen in her latest vlog on Friday, July 3.

The couple discussed dealing with online bashing, making a difference and understanding the anti-terror law just after reuniting last week. They were apart for over 3 months due to community quarantine restrictions.

It would appear that the video was taken prior to the passing of the anti-terror law on Friday as they still referred to it as a bill. Escudero expressed “serious reservations” about it because it counters constitutional provisions.

The Sorsogon governor also shared his thoughts on the internet and social media, stating, “If you’re out there, if you’re parading yourself on the internet, saying things, doing things… then you better take the good with the bad.”

He added that he subscribes to the statement, “I may not agree with what you are saying but I will always defend to the death your right to say it” — even if it means that he is subjected to hurtful comments.

They also teased each other, saying that they both dealt with more bashing after they got married.

Evangelista remarked that it is hard to ignore negative comments and that when she does, she gets criticized too. Her husband reminded her that she should take time to rest and “just tune off.”

He revealed that for his birthday, he would leave his phone in his bedside drawer to get some peace. Evangelista noted that it is good for one’s mental health to “detoxify” from the internet.

The actress asked her husband about his thoughts on the anti-terror bill, sharing that she had been doing her research about it.

Escudero was concerned about warrantless arrests when one is merely a suspect. When Evangelista asked about scenarios where one could be arrested, he answered, “There are no definitions. It’s too broad, and that’s what makes it worrisome.”

Evangelista brought up that similar laws in other countries are “more extreme,” but that “it’s done in a way that they’re safer.”

He said that the government should tackle criticism about the bill by proving that it will not be abused.

“I think the government should, instead of fighting or arguing with people… that they should build confidence that this law will not be abused, that this law, even if it should pass, will be subjected to constitutional scrutiny by the Supreme Court and that they will obey.”

The conversation then covered what one can do about the bill if it is passed, and into what one can do to make a difference, especially when it comes to political issues.

“I’m very frustrated because I also have my political beliefs and stand and sometimes — we don’t clash but you’re also very careful for me,” said Evangelista, before asking how one can make a difference.

Escudero advised voting in elections and using one’s voice given that “the internet empowered everyone.”

He also said that if one finds themselves in a “lonely fight,” then they can start with themselves.

“You keep the fire burning in yourself, keep it in your head and hold firm to that belief and those principles because who knows, you may be given an opportunity some time to voice them out,” Escudero said.

The response wowed Evangelista, who could not help but say, “Gwapo ka!” (You’re so handsome!)

The video is part of Evangelista’s “adulting” series where she discusses life advice with Escudero. The couple tied the knot back in 2015. JB

Heart Evangelista on why she won’t join politics: ‘I can help without that kind of power’

Heart Evangelista replies to ‘out of touch privileged’ remark: ‘Using my image to create hate is wrong’