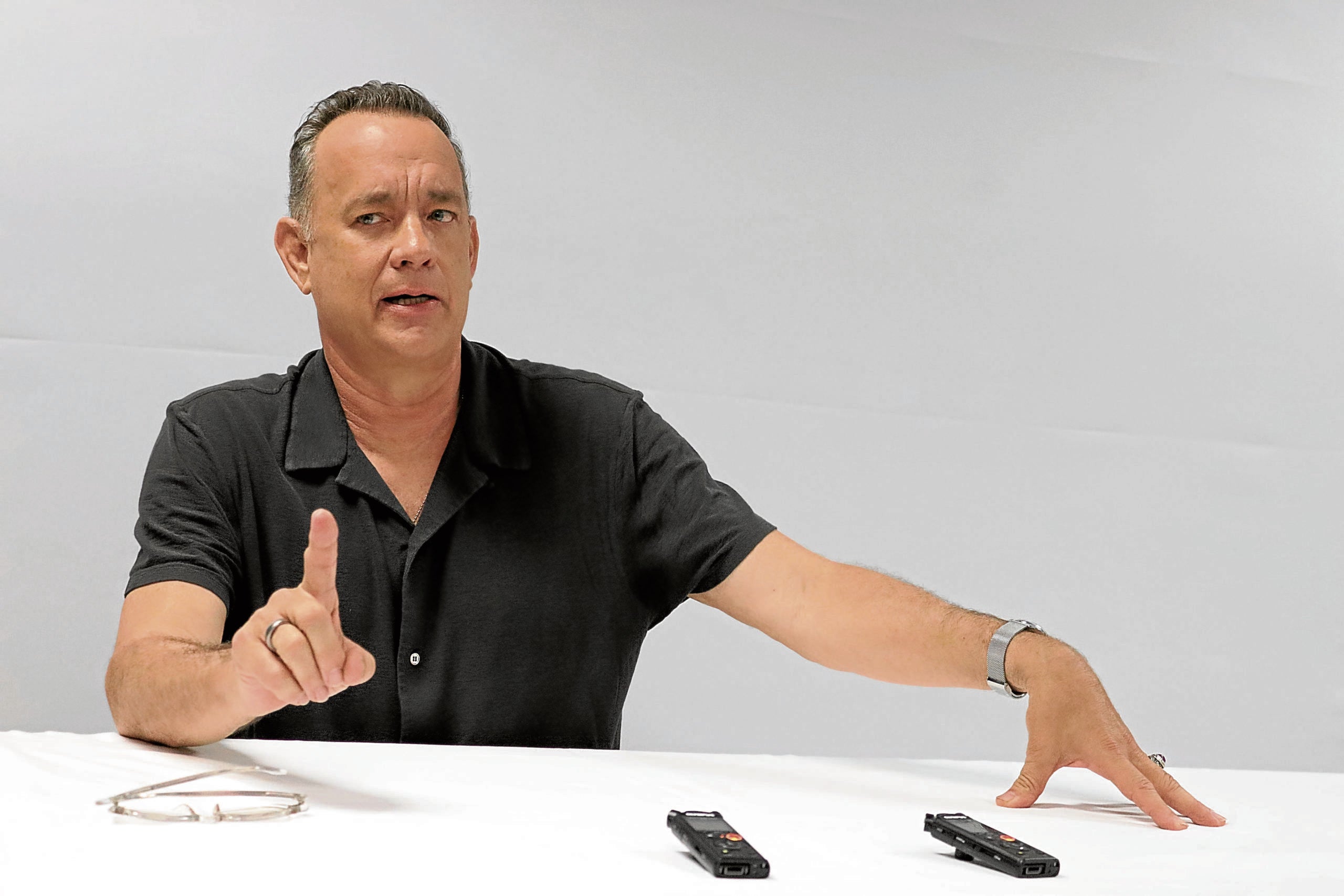 LOS ANGELES—In one of his first interviews since he and his wife, Rita Wilson, recovered from Covid-19, Tom Hanks was back to his usual folksy, nice-guy self.

“With Covid-19, it was actually kind of a bunt,” said Tom in our recent video call. “My wife and I were down there (in Australia). We found, ‘What, positive? What did we win?’ They’re like the two phases of any kind of challenge that anybody is going to take. Here are the facts, here’s the reason why you have to be careful, and here’s why it’s important that you do your part, you take part in the collective.”

Tom was in Australia preparing to play Colonel Tom Parker in Baz Luhrmann’s untitled Elvis Presley biopic. He and Rita stayed in a five-star hotel in Queensland.

The acting pair experienced symptoms and tested positive for Covid-19. Hollywood’s top couple became among the first celebrities to suffer from the coronavirus disease and were confined in isolation at Gold Coast University Hospital in Queensland.

“One of the reasons we were isolated for three days was, of course, to keep an eye on our health, lungs, blood levels, oxygenation, heart rate … everything,” Tom recounted from his LA home. Behind him were shelves crammed with books, including Carl Sagan’s “Cosmos” and Ada Calhoun’s “St. Marks is Dead.”

“That was one reason the doctors wanted to keep an eye on us,” Tom pointed out. “The other reason was so that we would not give the virus to anybody else. So even there, it’s not a double-edged sword, but these twin responsibilities.”

A week after being released from the hospital, the couple returned to LA.

“We’re all in this together,” declared the 2020 Cecil B. DeMille awardee and three-time Golden Globe best actor winner about the worldwide pandemic crisis. “Everybody is suffering to a much greater extent than I am. The reality is that this is a great equalizer and that no one is safe.”

Ever Mr. Nice Guy, Tom reflected, “I wake up every day and consider myself extremely blessed that I have a level of safety that other people don’t enjoy. That was then, this is now.

“We aren’t done with this; we’re right smack dab in the middle of this. So I’m paying attention to the reality that hey, do your part and my part here is to understand my blessings and see where I can help out.”

He shared, “Altruistically, you write some checks to food banks and everything else that’s going on. Not only do you take part in the collective effort, you also do your part individually. So, I’m a lucky man.”

And he is innately a good man. Former US President Barack Obama paid Tom the highest compliment at the Kennedy Center Honors event in 2014: “People have said that Tom is Hollywood’s Everyman, that he’s this generation’s Jimmy Stewart or Gary Cooper. But he’s just Tom Hanks. And that’s more than enough.”

Asked about Trump’s handling of the coronavirus pandemic, Tom answered, “We’re looking at a circumstance where we have to do our part. There is a quote. Here it is—Edmund Burke.

“He said, ‘The only thing necessary for the triumph of evil is for good men to do nothing.’” (Sources claim Burke didn’t say it; John Stuart Mill reportedly said it earlier in 1867: “Bad men need nothing more to compass their ends, than that good men should look on and do nothing.”)

“I don’t necessarily want to parse out the word evil in this circumstance, but I think periodically the United States of America gets the government it deserves. It gets the leaders it chooses, then we have to judge them by the track record.”

He emphasized, “The great thing about America is that every four years, we do have a reckoning. And if everybody understands that the most important election of our lifetimes is always the next one.

“They have consequences and I don’t even have to look this one up, but there’s a quote that says, ‘He who sows the wind, shall reap the whirlwind.’ Well, I think the whirlwind is coming.”

The Covid-19 survivor has plunged back to work, actively promoting his new movie directed by Aaron Schneider, “Greyhound.” Aside from starring as Commander Ernest Krause, Tom wrote the screenplay based on CS Forester’s novel, “The Good Shepherd.” 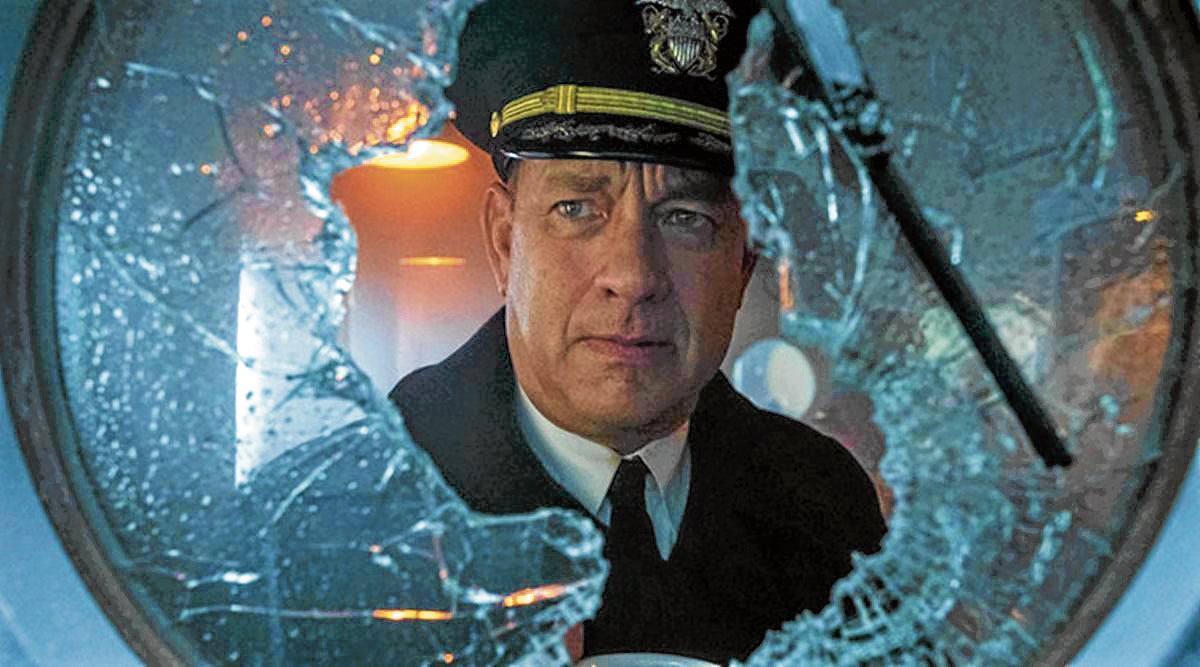 The World War II action-drama, inspired by actual events, narrates how Krause leads an international convoy of 37 ships on a dangerous mission across the Atlantic to transport thousands of soldiers and much-needed supplies to Allied forces. Also starring Elisabeth Shue and Stephen Graham, the film premieres July 10 on Apple TV+.

On playing an officer finally put in command of a Navy destroyer, Tom said, “Once again, I’m trying in ‘Greyhound’ to achieve what seems like the impossible until you reach a corner and have some faith—No. 1, in yourself; No. 2, in serendipity, fate, luck, being in the right place at the right time.”

The Oscar best actor for two consecutive years, 1994 and 1995, remarked on when he will return to the set of the Luhrmann project, which will feature Austin Butler as Elvis Presley.

“The entire industry is trying to reconcile how to go on. There is certainly a plan, a desire from the studios’ perspective, to somehow figure out a way to make it happen. It looked as though we were going to be on a path where we would start up production again.

“There are dates that say, maybe we’ll be making this movie in October. There are questions about quarantine, [checking] temperatures, [health safety on] soundstages and all of that.”

Tom recalled what he shot as the popular manager of Elvis Presley before Covid-19 struck him: “What we do know is that we were down there for the better part of three weeks. I did that kind of Baz Luhrmann pass on it. We played and tried stuff. He followed me around with nine different cameras somehow and put together an incredibly exciting reel that gives you the feel of the DNA of the film.

“And the question that just comes down to it now, among the protocols, requirements, regulations, science and the economics, is boy, we hope those things meld so that we can all return Down Under and make the movie that we started carrying around in our hearts. We were this far away from starting shooting. We got there, we were tested on a Tuesday, we were in isolation on a Wednesday, and we were supposed to start shooting the following Monday.

“We’re just bowing our heads down with whatever providence and Pelicula, the great goddess of film, have in store for us.”

Turning 63 in a few days (July 9), Tom ponders about what keeps him going, especially being given this new lease on life. “I don’t know that it’s inner strength in so much that it’s just this desire, a natural leaning in. I’m fascinated to the point of being possessed by certain aspects of human behavior. I started off being an actor in high school and even before that, because I thought this is the greatest racket in the world.

“I get to go to school, act and be in plays, come up with stuff and they give me credit for it, the same kind of grade you’d get for architectural drafting or geometry. Holy cow, sign me up, this is wowie zowie, this is fantastic! I pursued it because there was just nothing more fun than this, that it is a job was astounding to me. I didn’t think it was a job until I actually got one.”